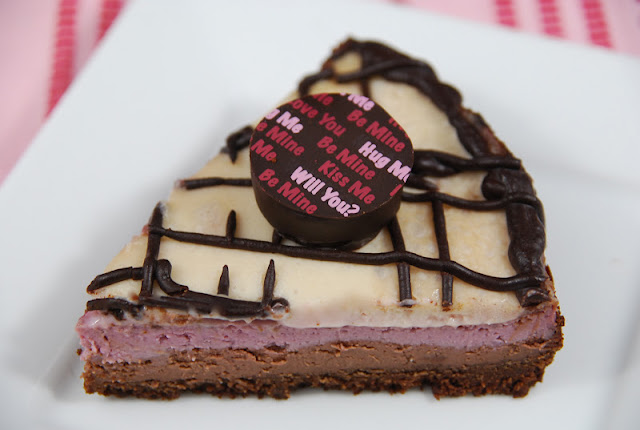 I asked Mr. RK what flavor cheesecake he would like for Valentines Day and he very quickly said chocolate raspberry.  I used to make him cheesecakes for his Birthday, when I could still eat dairy and eggs, but I haven’t attempted to make one in years.  My original cheesecake recipe came from the McCormick Spices of the World Cookbook.  What I loved about this recipe was the sour cream top layer that you add at the end.  I had to change the original recipe, a lot, because I’m allergic to eggs but I left the sour cream top as it was written.
I have to say that this recipe is a work in progress.  It wasn’t perfect and I would do things differently next time...and there will be a next time because I do love cheesecake as much as Mr. RK.  I made the bottom crust layer from chocolate bunny cookies.  You could use whatever chocolate wafer cookies are available in your area.  I ground them up in a food processor and mixed them with some melted Earth Balance.
The next step was to make the cheesecake layer.  For this part, I adapted a recipe from Susan at Fat Free Vegan blog.  I took half of the cheesecake mixture and mixed it with melted chocolate and the other half with some frozen raspberries. 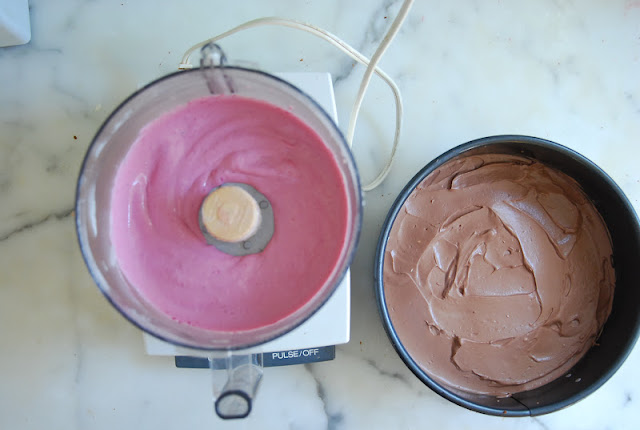 Next time, I’m going to double the recipe so that the chocolate layer is thicker.  There needed to be more cheesecake in this cheesecake.  The other mistake I made was using evaporated cane juice sugar in the sour cream top.  Because it’s not as refined as white sugar, it gave the top a yellowish color that was not pretty.  That’s why I ended up decorating the top with chocolate...to hide the discoloration.  Next time I’ll use powdered sugar instead. 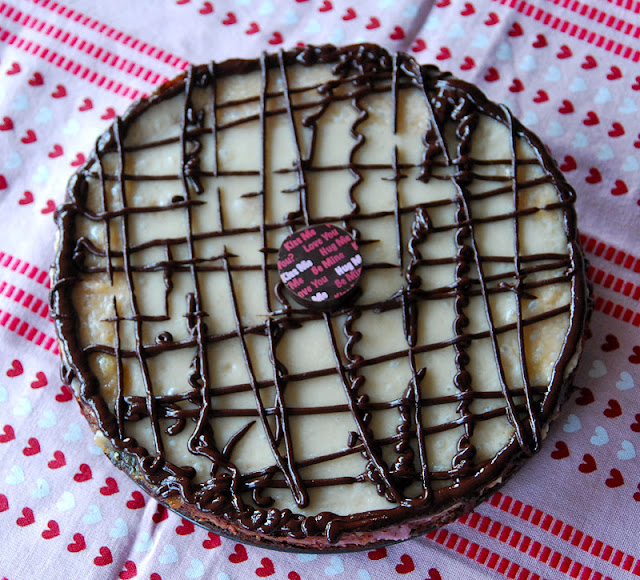 Not every recipe is a success, I thought about not posting this because I wasn’t very happy with the way it looked but, it tasted great. I’ve made the changes to correct my mistakes, so you’ll have the better recipe.

For the chocolate layer add: 8 oz semisweet chocolate, melted
For the raspberry layer add: 1/2 cup defrosted drained frozen raspberries and 2 Tbs sugar
For the Sour Cream Top:
1 pint Tofutti non dairy sour cream
1/3 cup powdered sugar
1 tablespoon vanilla extract
Preheat your oven to 350°
Grease a 9” spring form pan
Melt the chocolate in a double boiler and set aside.
Grind chocolate bunny/wafer cookies in a food processor until you have 1 3/4 cups crumbs.
Put the cookie crumbs in a bowl and add the melted butter substitute.
Stir until well blended and press into the bottom of the spring form pan.
Clean out your food processor and add the cream cheese, tofu, sugar, lemon juice, starch and vanilla.
Process for 15 seconds and scrape down the sides of the bowl and process for 15 seconds more.
Remove all but 1 1/2 cups of the cheesecake mixture and put it in a clean bowl.
Stir in the melted chocolate.
Pour the chocolate cheesecake mixture in the spring form pan, spreading evenly over the crust.
Add the raspberries and sugar to the 1 1/2 remaining cups remaining mixture in the food processor.
Process until smooth.
Pour the raspberry mixture over the chocolate mixture, spreading evenly to cover.
Bake for 60 minutes.
Remove the cheesecake from the oven and turn up the temperature to 450°
Mix the sour cream with the sugar and vanilla in the food processor.
Pour it over the cheesecake, spreading it evenly to cover.
Put it back in the oven and bake for 7 minutes more.
Remove the cheesecake from the oven and let it cool for at least 30 minutes.
Refrigerate for at least 3 hours, overnight is better, before cutting.

Posted by My Recession Kitchen at 9:58 AM