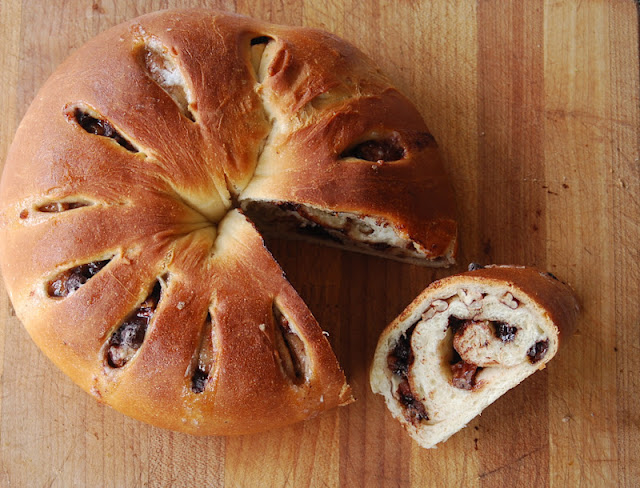 The March 2011 Daring Baker’s Challenge was hosted by Ria’s Collection and Jamie of Life’s a Feast.  Ria and Jamie challenged The Daring Bakers to bake a yeasted Meringue Coffee Cake.
The first challenge of this recipe was to find a replacement for the meringue.  Since I’m allergic to eggs and need to avoid all cholesterol containing foods, I turned to this wonderful product I’ve used in the past called Angel Food Vegan Meringue.  Back in October of 2009 I used it to make French macarons.
The dough calls for a egg as well, which I replaced with an egg substitute by Bob’s Red Mill. 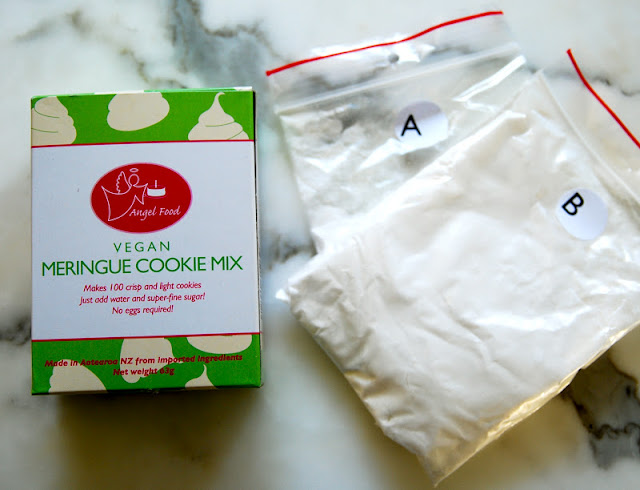 The rest of the recipe was fairly straight forward.  You start by making a yeasted sweet dough.  I used my stand mixer to mix and knead the dough.  I love my stand mixer, it takes all of the work out of kneading dough and does a better job.  If you don’t have one, you should consider the investment, it’s worth it. 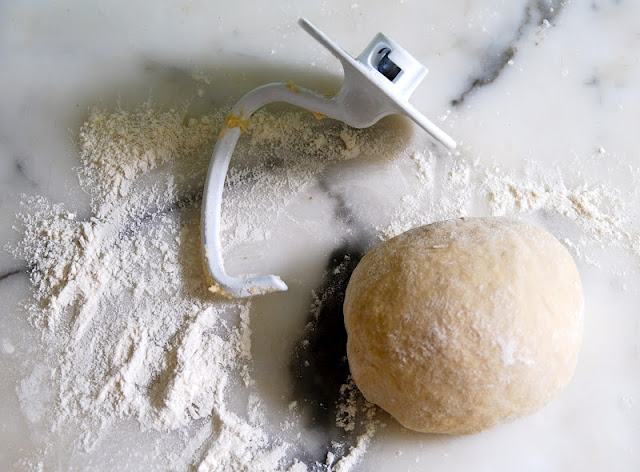 While the dough was resting, I made the meringue.  You take a some powder from package A and mix it with water and vanilla.  After beating it into soft peaks, you mix some of package B with castor sugar and slowly add it to the wet mixture while you continue to beat it.  It looks like the real thing. 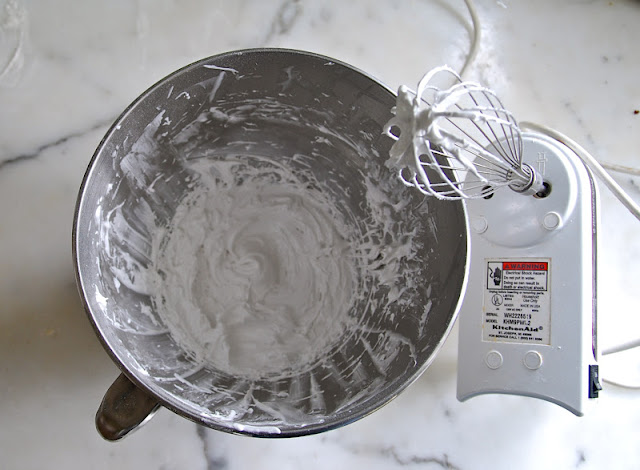 After the dough has risen for about an hour you roll it out into a 10”x20” rectangle. 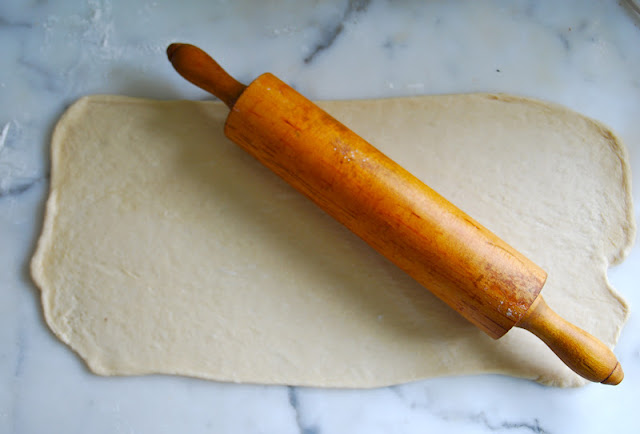 Then you spread the meringue on the dough, sprinkle it with cinnamon, chopped pecans and chocolate chips.  I thought the filling was a little skimpy, next time I would add more. 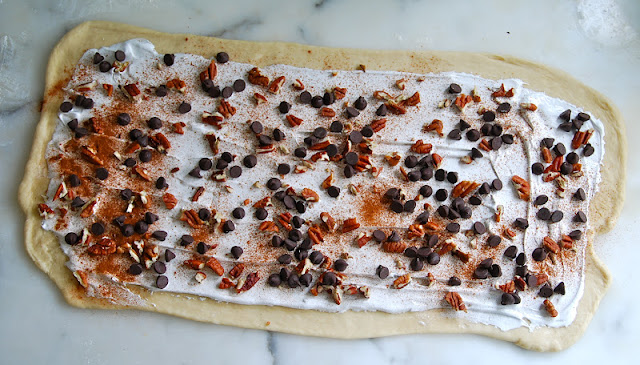 Then you roll it up, starting on the long side. 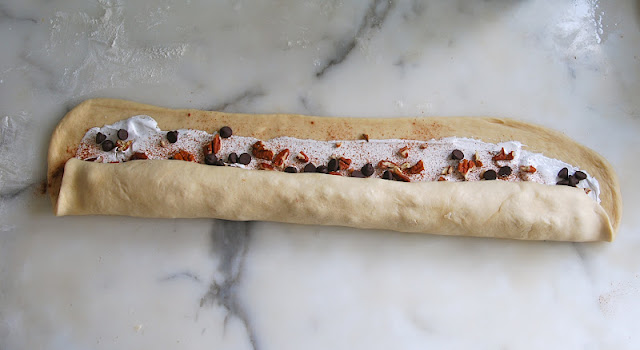 After you pinch the seam closed, you join the ends together by inserting one end into the other and pinching that seam as well to form a ring. 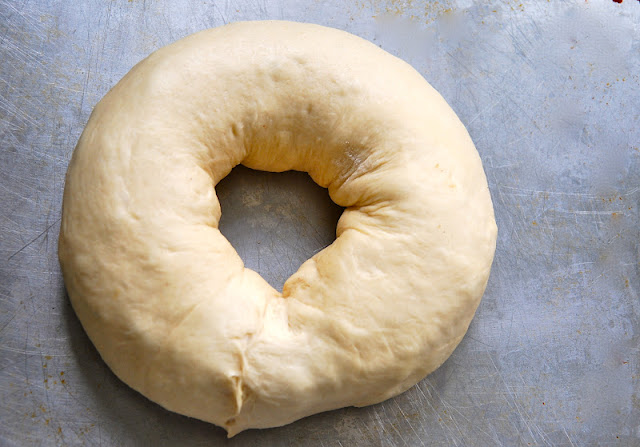 Next, using a kitchen scissors, you make cuts at 2” intervals around the ring.  I just realized that I forgot to take a picture of that step.  Don’t be afraid to cut at least half way thought the dough, I only went about a third of the way and I should have cut it deeper.  It just looks nicer if you do.
You let the dough rise for another hour and then brush the top of the coffee cake with an egg wash.  I replaced the egg wash with a little powdered sugar that I mixed into some rice milk.  This will give the  finished coffee cake has a wonderful golden color. 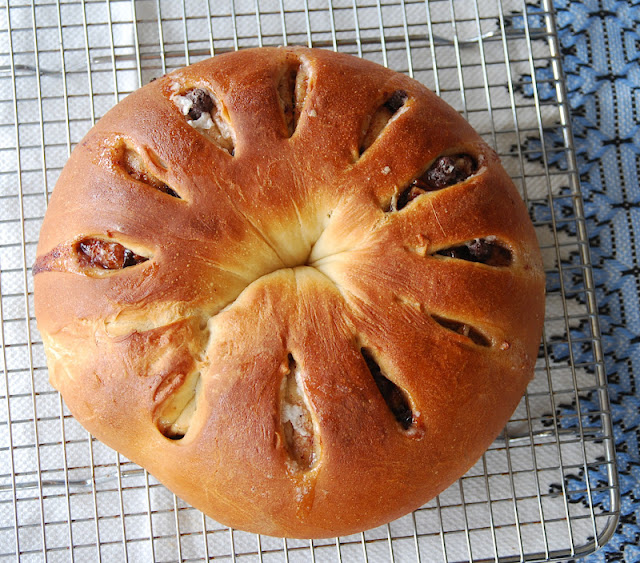 You could make this coffee cake with any combination of fillings from sweet to savory.  I think a soy sausage and mushroom one would be very tasty. 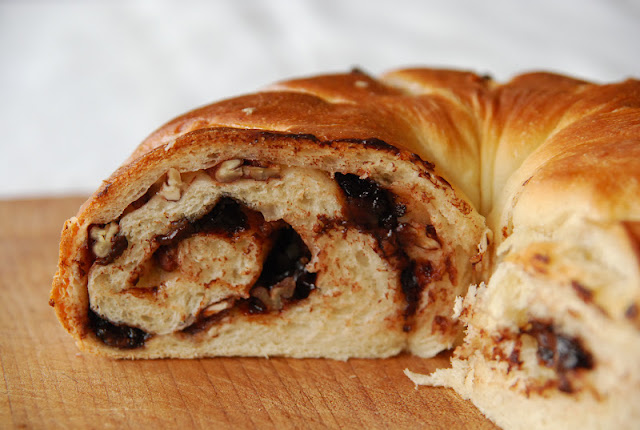 Yeasted Meringue Coffee Cake
Makes 8 servings - Use organic ingredients whenever possible
For the dough:
2 cups all purpose flour
2 tablespoons sugar
1/4 teaspoon salt
1 teaspoon active dry yeast
1/4 cup + 2 tablespoons rice milk (or other non dairy milk)
2 tablespoons water
1/4 cup Earth Balance butter substitute
1 tablespoons Bob’s Red Mill egg substitute mixed with 3 tablespoons water
For the meringue:
1/2 recipe Angel Food vegan meringue recipe
1/4 teaspoon vanilla extract
1/4 cup castor (superfine) sugar
For the filling:
1/2 teaspoon cinnamon
1/2 cup chocolate chips
1/2 cup chopped pecans
For the egg wash:
2 tablespoons rice milk
2 teaspoons powdered sugar
In a large mixing bowl, combine 3/4 cups of the flour, the sugar, salt and yeast.
In a saucepan, combine the rice milk, water and butter substitute and heat over medium heat until warm and the butter is just melted.
With an electric mixer on low speed, gradually add the warm liquid to the flour/yeast mixture, beating until well blended. Increase mixer speed to medium and beat 2 minutes.
Add the egg substitute and 1/2 cup of the flour and beat for 2 more minutes.
Stir in enough of the remaining flour to make a dough that holds together. Turn out onto a floured surface or use a stand mixer to knead the dough for 8 to 10 minutes until the dough is soft, smooth, and elastic, adding extra flour as needed.
Place the dough in a lightly oiled bowl, turning to coat all sides. Cover the bowl with plastic wrap and a kitchen towel and let rise until double in bulk, 45 – 60 minutes.
Once the dough has doubled, make the meringue:
In a clean mixing bowl, mix the two packets of meringue mix according to package instructions. Adding the vanilla to the water and packet A and the sugar to packet B. Beat according to package instructions.
Punch down the dough, and knead it a few times.
Roll out the dough into a 20 x 10-inch rectangle.
Spread the meringue evenly over the rectangle up to about 1/2-inch from the edges. Sprinkle the cinnamon, nuts and chocolate chips evenly over the meringue.
Roll up the dough jellyroll style, starting from the long side. Pinch the seam closed to seal. Very carefully transfer the filled log to a cookie sheet, seam side down. Bring the ends of the log around and seal the ends together, forming a ring, tucking one end into the other and pinching to seal.
Using kitchen scissors or a sharp knife (although scissors are easier), make cuts along the outside edge at 2-inch intervals. Cut them about half way through the ring.
Cover the coffee cake with plastic wrap and allow it to rise again for 45 to 60 minutes.
Preheat the oven to 350°F.
Brush the tops of the coffee cakes with the rice milk & sugar mixture.
Bake in the preheated oven for 25 to 30 minutes until risen and golden brown. The dough should sound hollow when tapped.
Allow the coffee cake to cool completely before cutting.
Posted by My Recession Kitchen at 11:36 AM