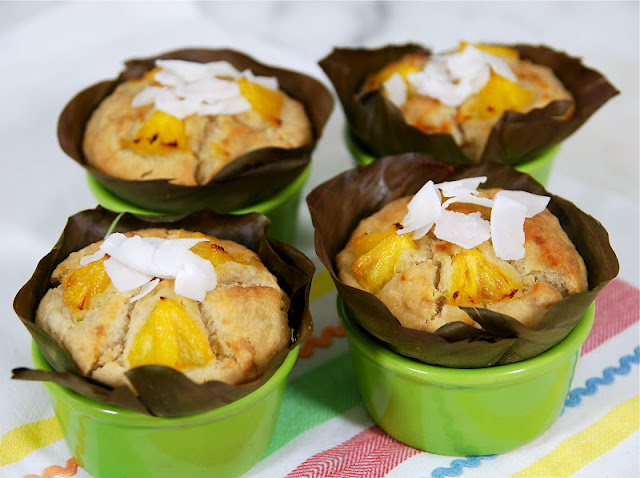 The Sans Rival cake requires 10 eggs and I’m allergic to eggs.  Usually, I’m fairly successful at finding a substitute for a few eggs in a recipe but 10 was a little too challenging for me in the midst of Thanksgiving cooking.  I opted for the bonus recipe, the Bibingka.  This is a rice flour and coconut milk cake traditionally eaten during the holiday season.  It’s baked in banana leaves with a slice of salted egg in the middle.  I substituted the egg with some pineapple chunks.
You’re going to have to make a trip to an Asian market to find some banana leaves for this recipe.  I found them in the freezer section.   Traditionally, the cakes were wrapped in the banana leaves and cooked in the coals of a fire, giving them a smoky flavor.  I followed the updated version which has you line little baking dishes with the leaves and bake them in an oven.  I thawed the leaves and cut 8” circles using a plate, a cutting board and a knife. 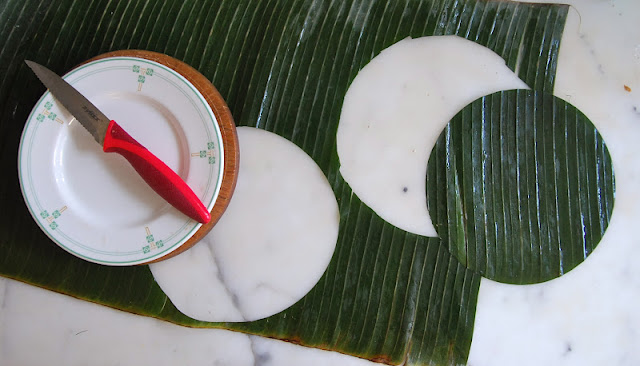 Once you have eight circles, you butter them and fold them into six 4” baking dishes. 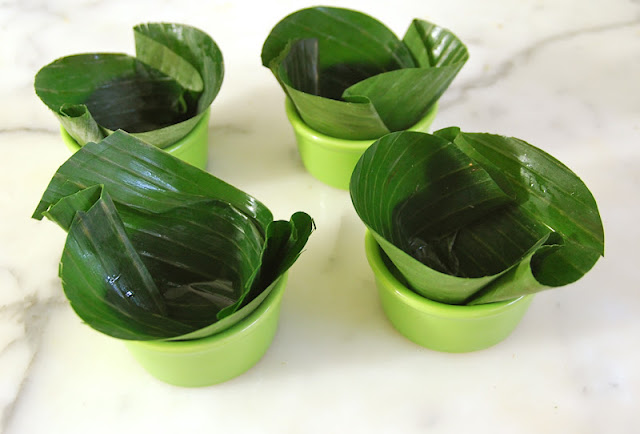 This recipe called for 3 eggs which I substituted with chia seeds.  Yes, those tiny little seeds used to grow fur on the 1970’s phenomenon, the chia pet.  Except, it turns out that when mixed with water, chia seeds form a gooey mass similar to eggs whites.  One tablespoon of seeds to three tablespoons of water for each egg.  I used this gooey mass to bind the cakes.  (Salba is just another name for chia.) 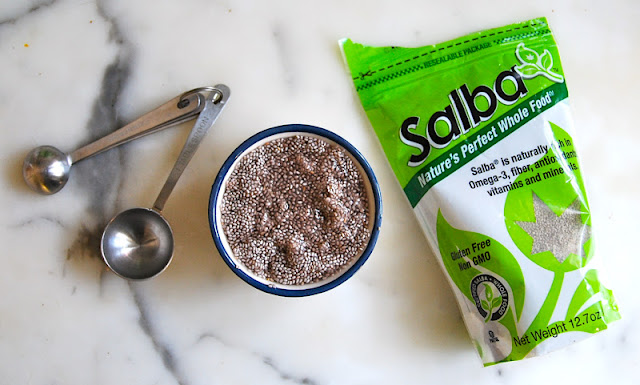 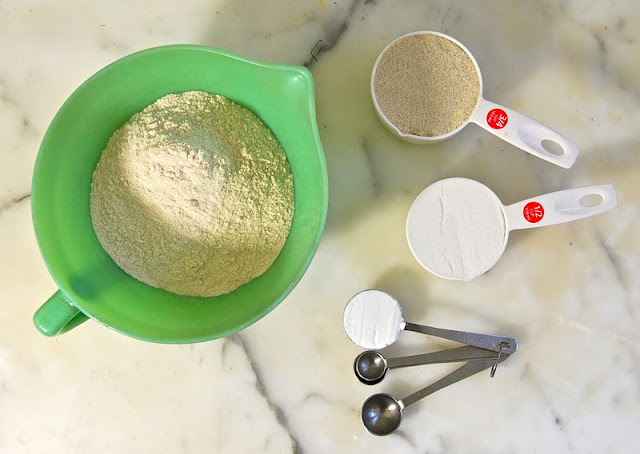 For the wet ingredients, you combine one can of coconut milk with 5 tablespoons of melted butter.  I used Earth Balance, a non dairy butter substitute.  I whipped the chia goo in a stand mixer with the coconut milk and melted butter and then mixed in the dry ingredients.  Then, I filled the banana leaves with the cake batter and top them with pineapple chunks.  The directions say to bake these in a 350° oven for 20 - 25 minutes.  This time works with 6” baking dishes but since I used 4” these took 45 minutes to cook.  Using the chia seeds instead of eggs may also have been a contributing factor in the increased cooking time. 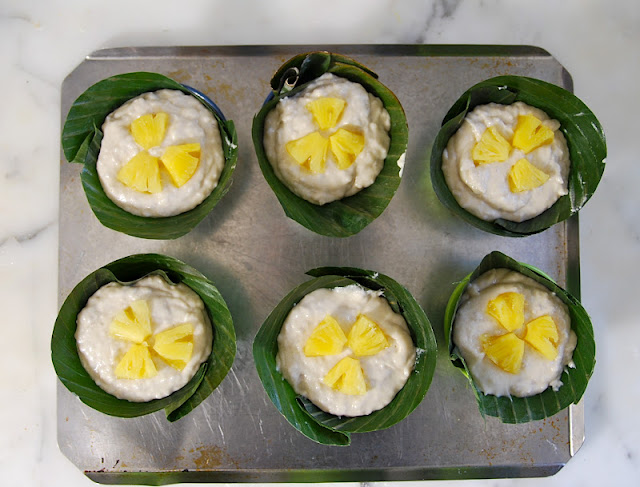 When the cakes are done you take them out of the oven, brush them with butter (Earth Balance) and put them under a broiler on low for 2 minutes to brown on top.  When they come out of the broiler you need to let them cool at little before you decorate the tops with some grated fresh coconut.  I didn’t have fresh coconut so I used some dried wide chip that I had on hand. 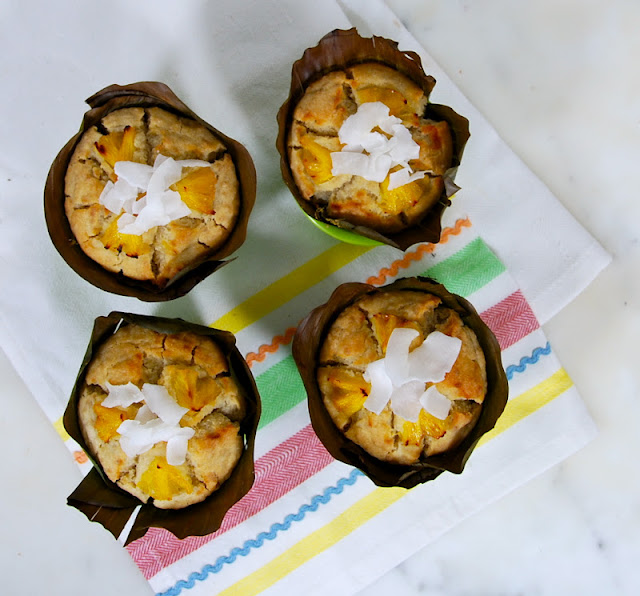 These are really good, sort of like a big soft muffin.  Next time, and I think there will definitely will be a next time, I might add 1/2 a cup of shredded coconut to the batter.   I love that these are gluten free and that the chia seed goo worked so well.  I do think that they’re best if eaten right away while they’re still warm. 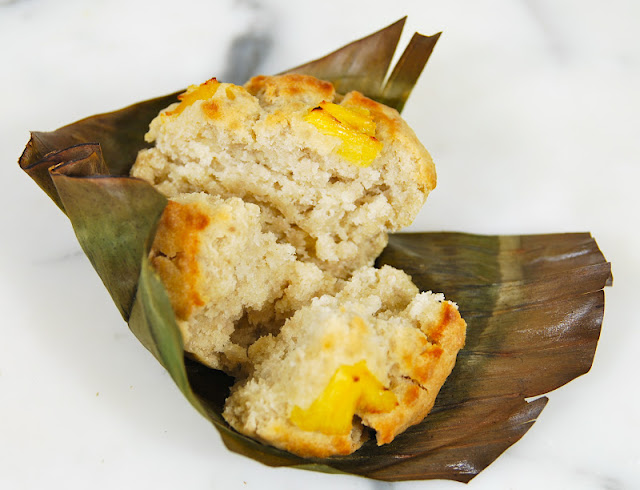 Bibingka
Adapted from Jun’s recipe from Jun-blog.
Makes 6 cakes - Use organic ingredients whenever possible
3 tablespoons chia seeds
9 tablespoons water
6 banana leaf circles (8”)
2 cups rice flour (or brown rice flour)
1/2 cup glutinous rice flour
3/4 cup sugar
1 tablespoon baking powder
1 15 oz can coconut milk
5 tablespoons Earth Balance butter substitute, melted + extra for the banana leaves and the tops
Pineapple chunks and coconut for decorating.
Preheat your oven to 350°
Mix the chia seeds with the water and in a small bowl and set aside until it’s a thick goo.
Cut six 8” circles out of the banana leaves.
Brush some melted butter substitute on the banana leaves and fold them into 4” baking dishes.
Combine the flours, sugar and baking powder in a bowl.
Pour the melted butter substitute into the coconut milk.
Put the thickened chia seed mixture into a stand mixer fitted with a paddle. (or use a hand mixer)
Turn on the mixer to medium speed and slowly add the coconut milk mixture.
Turn the mixer down to a low speed and add the flour mixture and blend until smooth.
Spoon the batter into the banana leaves.
Decorate the tops with pineapple chunks.
Bake for 45 minutes.  (25 minutes if you are using 6” baking dishes)
Take the cakes out of the oven and brush the tops with melted butter substitute.
Turn your broiler on to low and broil the cakes to brown the top for about 2 minutes.
Serve the cakes warm with some grated fresh or dried coconut on top.

Posted by My Recession Kitchen at 7:32 PM