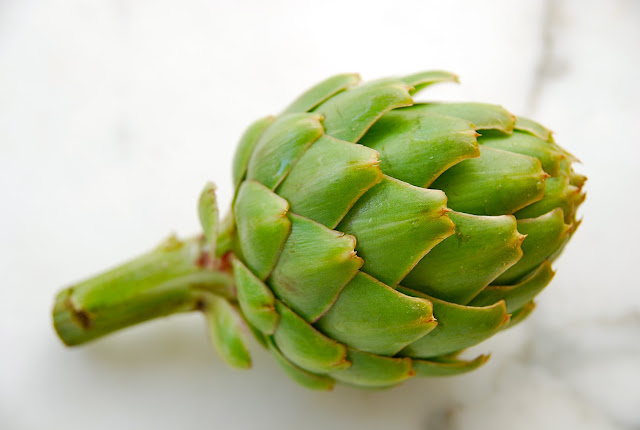 Last year we planted a perennial artichoke plant and this year we harvested 9 tender delicious artichokes.  Annual plants will produce the first year but you'll need to plant them each year.  I think it's worth the wait.

For those of you not familiar with the artichoke, it's actually the flower bud of a perennial thistle in the sunflower family, native to the Mediterranean and Canary Islands.  They were first written about by greek philosophers around 300 B.C.  They were brought to Louisiana by the French immigrants in the early 1800's and to California by the Spanish immigrants.  Today, 100% of the commercial crop in the United States is produced in California.

Artichokes produce one large bud at the top of the plant first.  This should be harvested when it gets to the size of an orange but before the leaves start to open.  The second, smaller set of artichokes grows around the center stock, lower down on the plant.  A third set of buds developed below the second set. 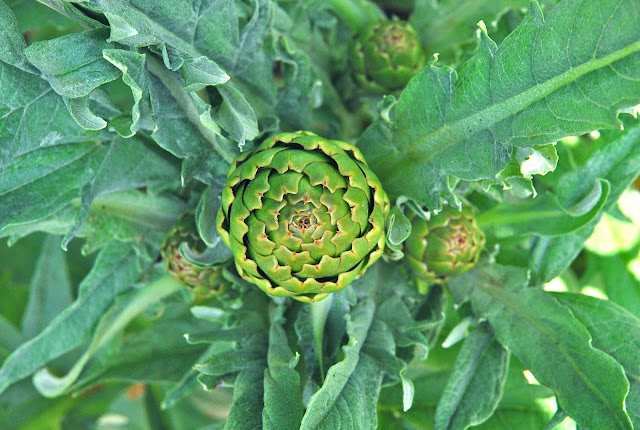 Plant your artichokes in full sun and well tilled soil.  You should work in a good amount of compost because they're heavy feeders. It's a good idea to fertilize them again several times throughout the summer.  They also need lots of water to keep the bulbs tender, but remember to water them around the base, and not the plant itself to prevent molds.

When the plant finishes producing artichokes, you need to cut the stock down close to the ground and let the new shoots have room to sprout up.  We've had one small artichoke from the new shoot already.

In the fall, before the first frost, you need to trim the plants close to the ground and cover the roots with several inches of mulch to protect them from the cold.  One plant will last about 3 -4 years, so you'll want to plant new ones after the second year.

Posted by My Recession Kitchen at 3:10 PM