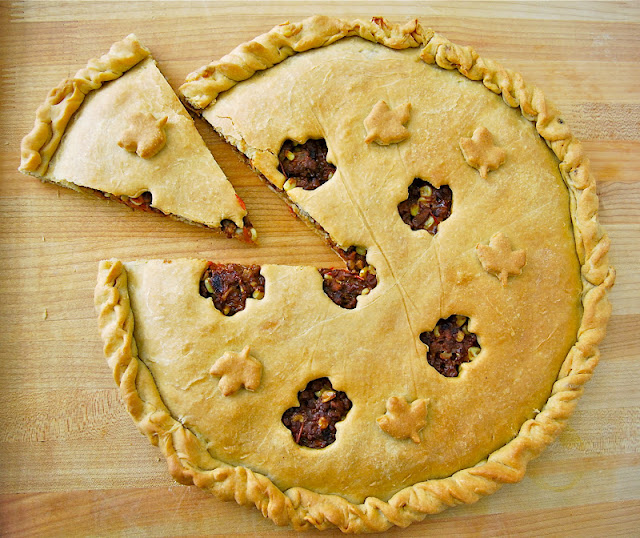 Patri of the blog, Asi Son Los Cosas, was our September 2012 Daring Bakers' hostess and she decided to tempt us with one of her family's favorite recipes for Empanadas!  We were given two dough recipes to choose from and encouraged to fill our Empanadas as creatively as we wished!

Empanadas are a stuffed bread or pastry that trace their origins to Northern Spain. The word comes from the Spanish verb, empanar, meaning to wrap or coat in bread.  Empanadas can be small, individual hand pies or larger like this one, either round or square.  Traditionally, they were stuffed with meat or tuna, and onions, garlic and tomatoes.  I chose to follow Patri's meat recipe, but I replaced the ground meat with a soy substitute.  I used Yves "Meatless Ground" because it resembles the texture of cooked ground beef and it's made from non GMO soy.

You start by making a bread dough that gets divided into two pieces.  One becomes the bottom of the Empanada and the second is for the top.  It really helps to roll the dough out on some wax paper so that you can easily transfer it to your pan.  I made this on a perforated pizza pan that would prevent the bottom from getting soggy with all that filling.  (sorry, I forgot to take a picture of the filling, just make sure you leave a good inch or so of dough free of filling around the outside edge) 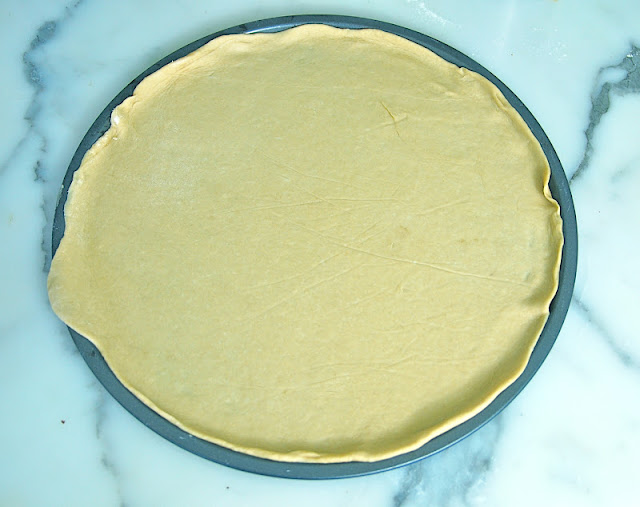 When you roll out the top piece of dough you need to make some vents for the steam from the filling to escape as it bakes.  You can do with by making one hole in the center and poking the dough with a fork but I chose to use a small leaf cookie cutter to make the vents for a fall themed empanada. 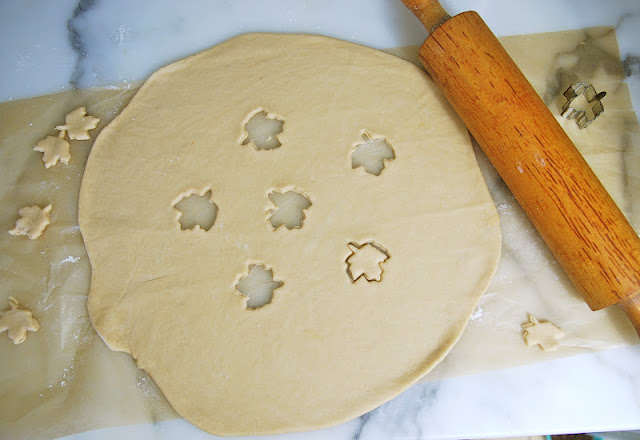 I used the leaves that I cut out to decorate the top.  There's a video on youtube that shows how to fold the top and bottom together in the traditional rope design. 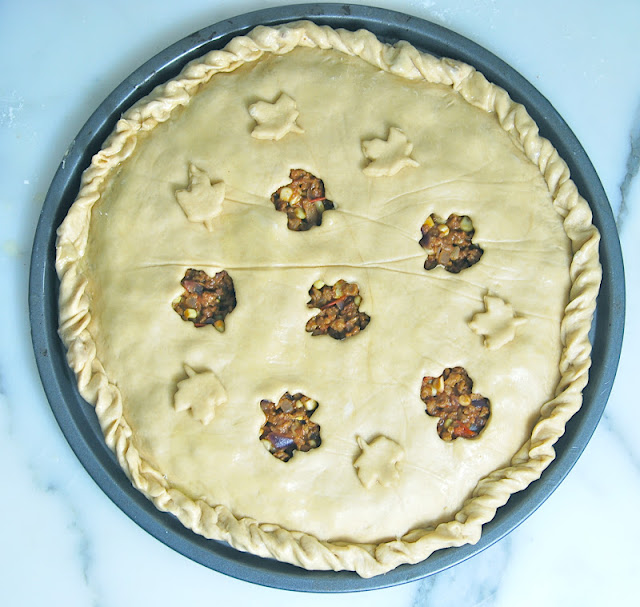 The recipe says to cook it in a 350° oven for 45 minutes.  My empanada only took about 35 minutes to bake so I suggest that you keep an eye on it so it doesn't over cook. 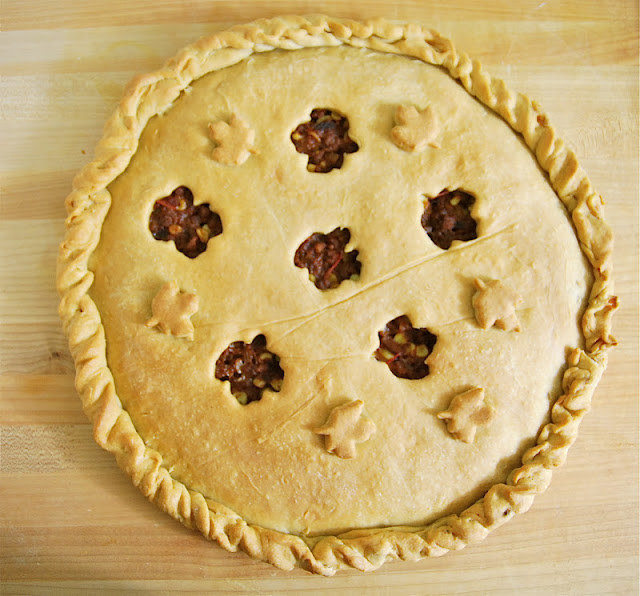 I did add some corn kernels to the filling, which I know is not traditional but I had to eliminate the bell pepper due to my allergy and I felt it needed a little something more.  The filling was delicious!  I also cut the amount of oil from 3/4 cup to 2 tablespoons.  I can't imagine why you would need 3/4 cup of oil, that just seems excessive.  You need to make the filling while the dough is rising because it needs time to cool before you put the empanada together.

Heat the oil in a skillet over a medium low heat.
Peel and dice the onion.
Add the onion to the oil and stir.
Peel and finely dice the garlic.
Add it to the onion and stir.
If you're using the bell pepper, dice it and add it to the pan.
Cook for 3 minutes, stirring occasionally.
Add the tomatoes and the corn.
Cook for 5 minutes, stirring occasionally.
Add the Meatless Ground, salt and paprika and stir well.
Turn the heat to medium high and cook off any excess liquid.
Turn the heat off and let the filling cool to room temperature.

When the dough has risen, punch it down & roll it into a ball.
Preheat your oven to 350°
Cut the ball into two equal pieces.
Cover one piece with the towel.
Roll out the other piece on floured wax paper to a 14" round.
Transfer the dough to a perforated pizza pan.
Put the filling on the dough, leaving an inch all around.
Roll the second piece of dough out on floured wax paper.
Cut small vent holes in the dough.
Transfer the dough to cover the filling.
Watch this video to learn how to fold the edges together:
http://youtu.be/CNpB7HkTdDk
Brush the top of the empanada with melted butter substitute.
Bake for 35 to 45 minutes or until golden in color.
Allow to cool a few minutes before cutting.

Posted by My Recession Kitchen at 3:11 PM