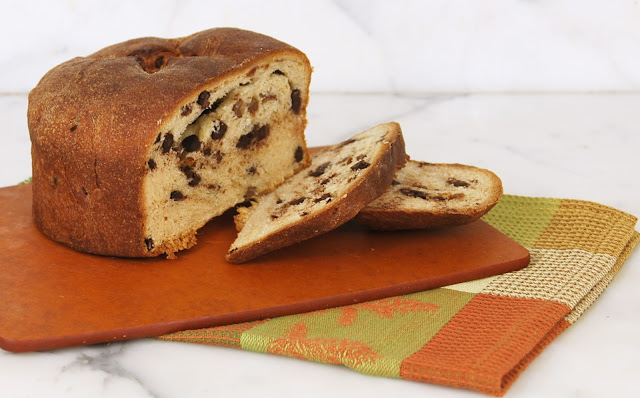 The December 2012 Daring Bakers' challenge was hosted by the talented Marcellina of Marcellina in Cucina.  Marcellina challenged us to create our own custom Panettone, a traditional Italian holiday bread.

The word Panettone is derived from the Italian "panetto" meaning small cake, but adding "one" to the end of the word changes the meaning to "large cake".  It's association with Christmas was first written about in the 18th century as a "Pan di Tono" or "luxury cake".  There are several romantic legends surrounding it's origins, one having to do with a baker named Antonio (Pan di Tony) but it seems unlikely since only Americans use this nickname for Antonio.

The most difficult part of this recipe, other than finding the time it takes to make it, was finding a substitute for the 4 eggs and 3 yolks called for in the recipe.  Because I'm allergic to eggs and the potato starch found in Ener-G egg replacer, I used Bob's Red Mill egg replacer.  It really doesn't do much to add lift but it does help replaced the fat and liquid of the eggs.

We really don't like candied fruit here in the Recession Kitchen so I opted for a chocolate and date variation of the recipe.  I soaked the date pieces in coffee for 10 minutes to soften them up a bit. 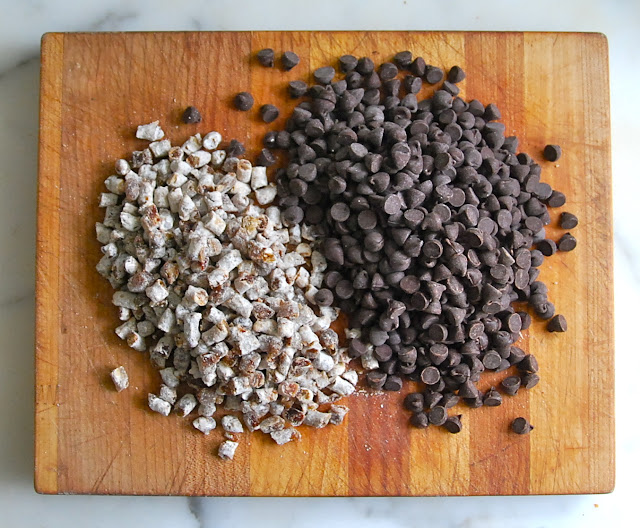 You start by making a sponge from yeast, flour and water, and let it rise for 30 minutes.  The second step is to make the first dough from more yeast, flour and water with the addition of eggs, sugar and butter.  The sponge is added to the second dough and allowed to rise for at least an hour.  Third step is to make the second dough by adding more eggs, sugar, honey, flavoring, butter, flour and salt to the first dough.  At this point it needs to rise for 2 to 4 hours. You can let it rise for 2 hours on your counter and then in the fridge over night, which is what I did.

Before the end of this rise, you need to make your filling.  I used a combination of chocolate chips, dates soaked in coffee and the zest from one orange.  This recipe makes two loaves, so you need to divide the dough into two pieces, roll out each piece and spread 1/2 cup of the filling on the dough. 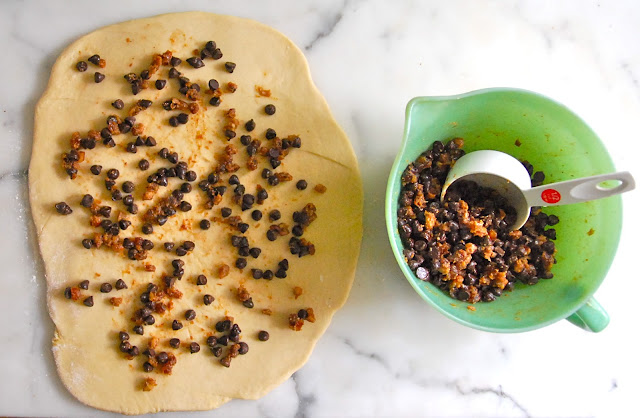 Then you roll the filling up in the dough and roll it out again and add another 1/2 cup of the topping to the dough. 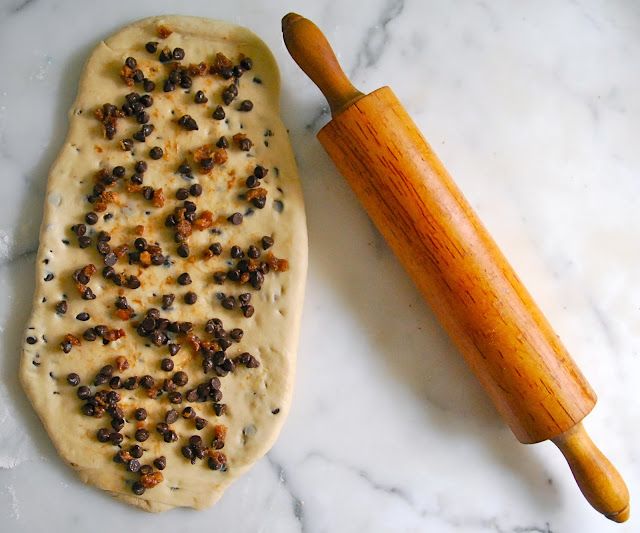 The final rise occurs in the traditional paper you use to bake the bread.  I should have shopped for the papers earlier, because by the time I got to the store, there were only the larger ones left.  The larger the paper, the shorter the loaf.  I would have preferred to use smaller ones to produce a taller bread. 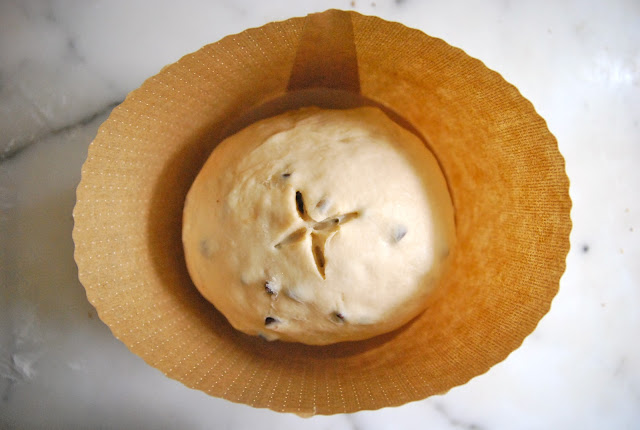 A large piece of butter is added to the top of the bread right before baking.  The time spent in making a panettone and the expensive of the ingredients helps you to understand why they cost so much to buy ready made.

To make the Sponge:
Mix the yeast and warm water together in a bowl and allow to stand for 10 minutes.
Mix in the flour, cover, allow to double in size for about 30 minutes.

To make the First Dough:
In a stand mixer, mix together the yeast and 3 Tbls warm water and allow to stand for 10 minutes.
Whisk together the egg replacer and the remaining 6 Tbls water
Using the paddle attachment, mix in the sponge, egg replacer, flour and sugar.
Add the Earth Balance and mix for 3 minutes until the dough is smooth.
Cover and allow to double in size for at least 1 hour.

To make the Second Dough:
Whisk together the water and egg replacer, vanilla and agave.
Using the paddle, mix in the liquid mixture, sugar, and salt.
Mix in the Earth Balance until smooth.
Slowly mix in the flour a little at a time, the dough will be soft.
Replace the paddle with the dough hook and knead for 2 minutes.
Turn out the dough and knead on a well floured surface until it holds it's shape
Add just enough of the flour to make a smooth dough.
Oil a large bowl and put the dough into the bowl and cover.
Let the dough rise until it's tripled it's size, 3 to 4 hours or
Let the dough rise for 2 hours and put it in your fridge over night.
Remove the dough from your refrigerator.
Soak the date pieces in the cold coffee for 10 minutes.
Drain off the excess coffee.
Add the chocolate chips and orange zest and mix to combine.
Divide the dough into two equal pieces.
Roll the dough out into an oval and cover with 1/2 cup of the filling.
Roll the dough up into a log and roll it back out into an oval shape.
Spread another 1/2 cup of the filling on the dough.
Roll up into a log again and knead a few times to remove any air pockets.
Repeat with the second piece of dough.
Shape each piece into a ball and put in each in a panettone paper.
Cut an X into the top of each piece and allow to double in size.
If you refrigerated the dough, it may take 4 hours or more. (2 hours if not)

To Bake:
When you think the dough as only 30 minutes left to rise, preheat your over to 400˚
Just before baking carefully cut the X in the top of the dough again (be careful not to deflate it)
Place a tablespoon of Earth Balance on top of the X.
Place your panettone in the oven and bake for 10 minutes.
Reduce the heat to 350˚ and bake for another 10 minutes.
Reduce the heat again to 325˚ and bake for 30 minutes or until the tops are brown and a skewer inserted in the top comes out clean.
Cool the panettone on it's side by cushioning it between rolled up towels.
Turn gently as they cool.
Cool completely before cutting.

Posted by My Recession Kitchen at 2:46 PM