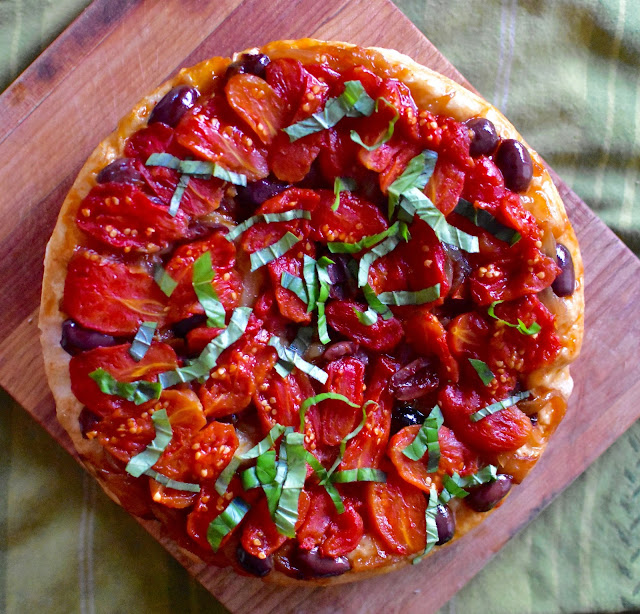 I made this pizza the same way you would make a French tarte tatin, which is an upside down dessert baked in a cast iron skillet.  I replaced the pastry dough with pizza dough and the fruit with tomatoes, caramelized onions, and kalamata olives.  I don't usually like dairy free pizzas but this was delicious!


I used fresh plum tomatoes from my garden.  Plum tomatoes work best because they're hardier and less juicy and will hold their shape. 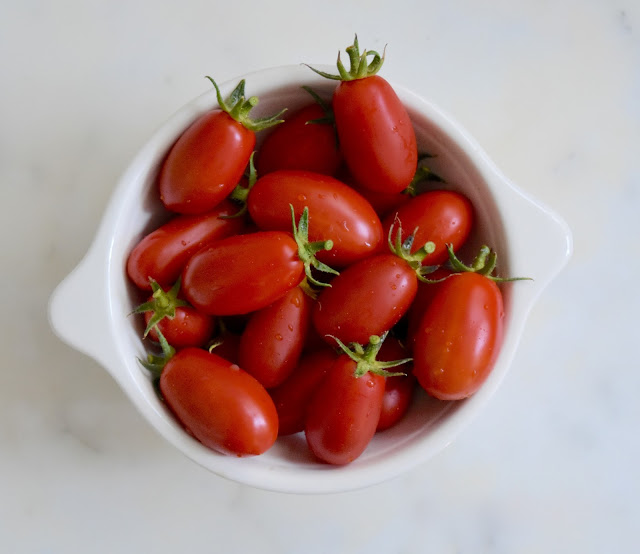 You need to drop the tomatoes in boiling water for 30 seconds (or even 25 seconds if they are small) and then immediately into a bowl of ice water to remove the skins. Don't skip these steps, or you will be sorry.  The skins can be very tough. 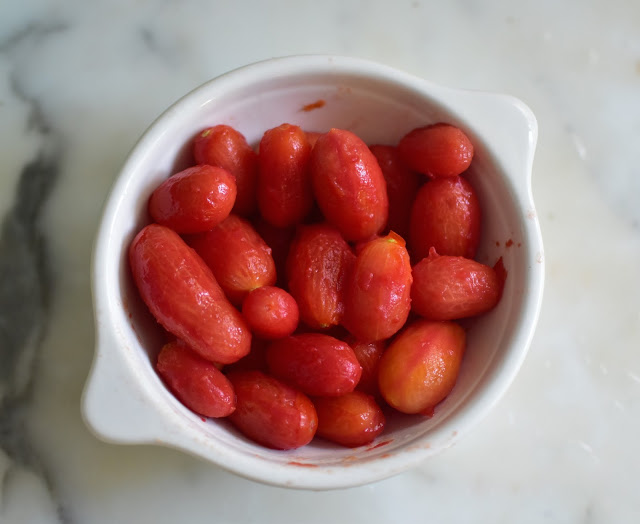 I cut the tomatoes in half lenghtwise.  Then, I melted some butter (I use Miyoko's cultured vegan butter) in a cast iron frying pan before I filled the bottom with the tomato halves, cut side down.  Simmer for 5 minutes. 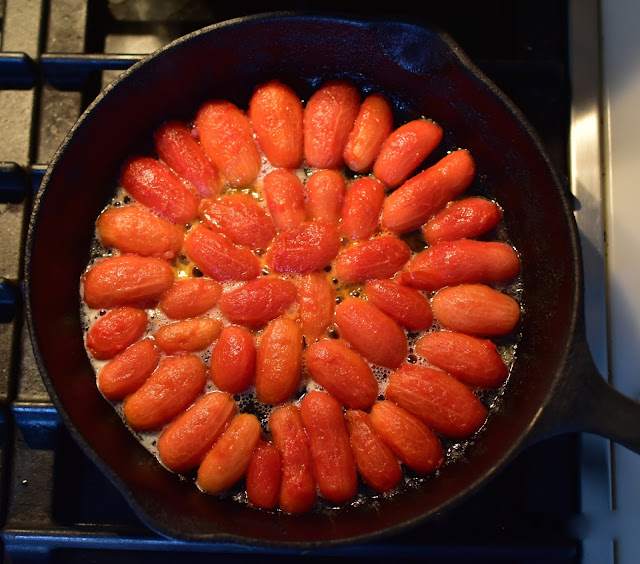 I also sauteed a sliced onion in vegan butter, olive oil and sugar until it was caramelized.  I put some halved kalamata olives on top of the tomatoes and then the onions. 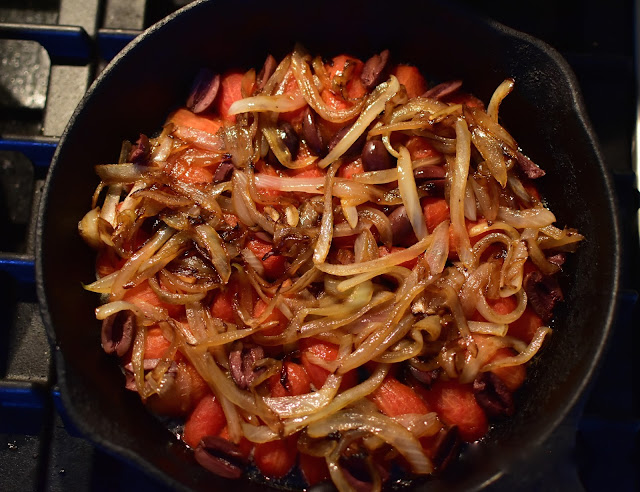 I used ready made fresh pizza dough that I bought where I work but you could make your own dough.  I stretched the dough out to fit the pan and laid it out over the onions and tomatoes, tucking the ends down a bit. 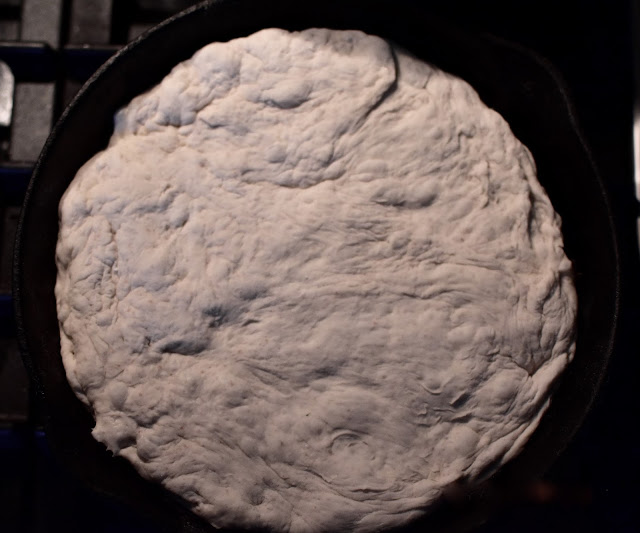 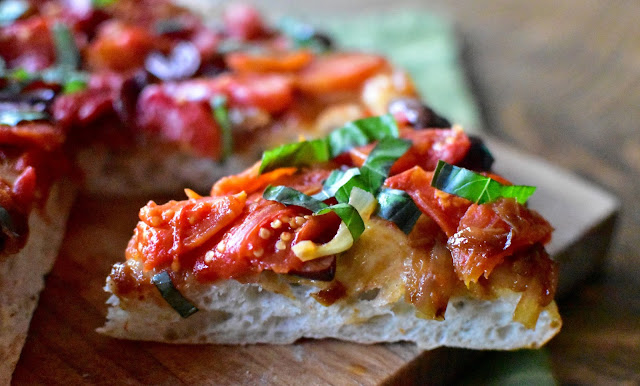 I  didn't punch the dough down very much so the crust was very airy and light. Feel free to punch it down and kneed it a bit if you prefer a tighter crust.

I topped the pizza with some fresh basil.  If you really need some cheese, you could add a little fresh parmesan, but it was wonderful without it.

Preheat your oven to 450˚
Remove the pizza dough from your refrigerator.
Bring a pot of water to a boil.
Fill a large bowl with cold water and ice.
Wash the tomatoes and remove the stems.
Drop about 1/3 of the tomatoes in the boiling water for 30 seconds.
Remove the tomatoes with a slotted spoon and drop them immediately into the iced water.
Remove the tomatoes one by one and remove the skin.
Repeat until all of the tomatoes are skinned.
Cut the tomatoes in half lenghtwise.
Melt 1 tablespoon of butter with the oil and the sugar in a pan over medium heat.
Remove the ends of the onion and then the skin and cut it in half.
Cut each half into thin slices.
Saute the onion in the butter, oil and sugar until they're golden brown and caramelized, stirring often.
Remove from heat and set aside.
In a cast iron skillet, melt the remaining butter over medium low heat.
Add the sliced tomatoes to the pan, cut side down in a circular pattern.
Saute for 5 minutes.
Turn off the heat.
Top the tomatoes with the olives.
Then top them with the onions.
On a floured board, punch down your pizza dough and kneed it if you prefer a thinner crust.
Otherwise stretch the dough out to the size of your pan and lay it on top of the tomatoes and onions.
Tuck the ends down, all around.
Bake for 15 minutes.
Remove from onion and let rest for 5 minutes
Place a plate or board on top of the pan and turn it over to remove the pizza.  You may need to use a spatula to remove some of the tomatoes if they stick to the pan.
Garnish with fresh basil and serve immediately.

Posted by My Recession Kitchen at 3:12 PM