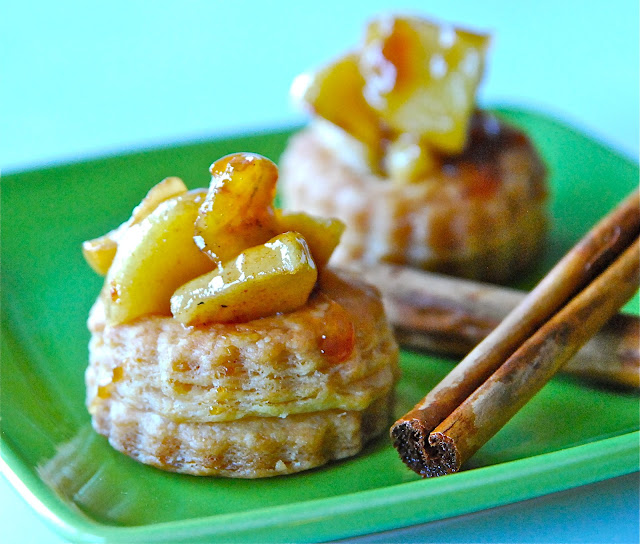 The September 2009 ' challenge was hosted by Steph of A Whisk and a Spoon. She chose the French treat, Vols-au-Vent based on the Puff Pastry recipe by Michel Richard from the cookbook Baking With Julia by Dorie Greenspan.


A Vols-au-Vent is a small hollow cup of puff pastry used to serve a variety of fillings, usually savory ones.  The word is French for "windblown", used to describe the lightness of the crisp, flaky, layers you see when the pastry is baked.  Puff pastry is a laminated dough with a solid fat.  It's a time comsuming process because the dough must be kept cold and rest between folds.


Because I no longer eat butter, I replaced it with Earth Balance buttery spread, a non-hydrogenated, cholesterol free butter substitute.  Earth Balance is salty (they don't make a salt free version) so I eliminated the salt.

I followed the rest of the directions as written. It said to roll the dough out to a 1/8-1/4 inch thick before cutting. Next time I would roll it out closer to a half inch thick to get a taller vols-au-vent.  I filled the finished vols-au-vents with caramelized apples and cinnamon.

I also made a dinner version of the vols-au-vent by cutting larger circles and filling them with a tofu mushroom stroganoff. 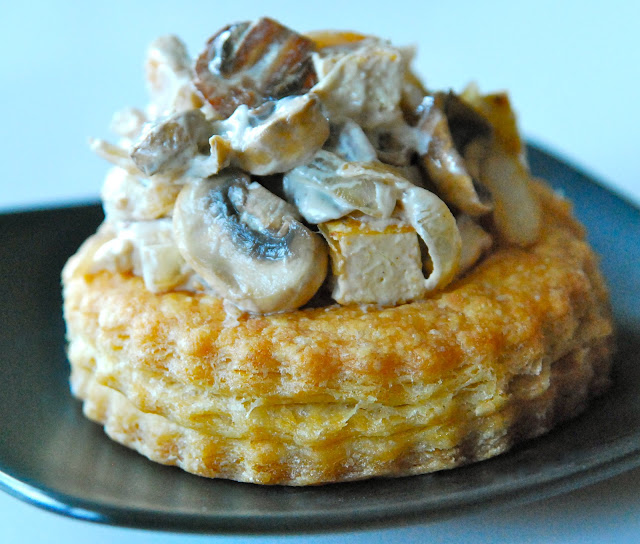 I wasn’t entirely sure why the puff pastry didn’t rise as high as I had hoped.  Did I make it correctly?  Did I roll the dough out thick enough?  Was it because I made the dough with a butter substitute?  Should I use pastry flour next time?  I conducted a little experiment with the scraps.  I cooked one vols-au-vent as I had done before and I cooked the second one using the convection setting on my oven.

Posted by My Recession Kitchen at 10:53 AM