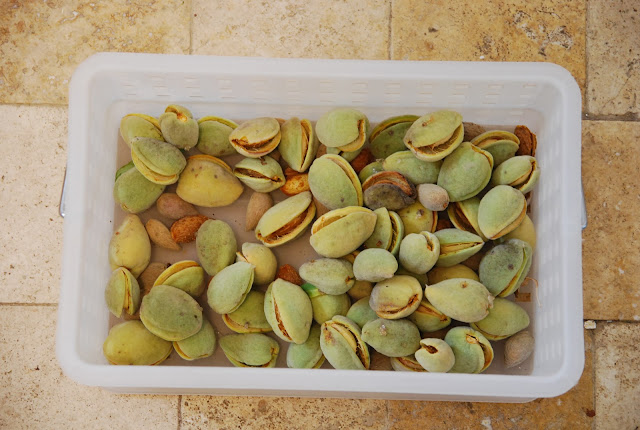 Two years ago, when I learned that the California Almond Growers were required to pasteurize their almonds, I went out and bought a self-pollinating Almond tree.  Pasteurizing almonds prevents them from sprouting and we eat a lot of sprouted almonds.  When you sprout the almonds, you remove the enzyme inhibitors, decrease the amount of fat they contain, and increase their nutritional value and digestibility.  I usually dehydrate them after I sprout them until they’re crunchy.
You can sometimes find unpasteurized almonds at the farmer’s market but I wanted to be sure that I would always have a supply, so I planted a tree.  This was my first crop.
Almonds grow in a thick green husk which splits open as they dry out.  Inside the husk is the nut, in a shell.  If they haven’t fallen out of their husk already, you should remove the husks so they can dry out completely.  You know they’re dry when they rattle in the  shell.

I would have preferred to let them dry out on the tree but we’ve had rain.  Rain in September!  We don’t ever get any rain in September.  First, we there was the lightening and thunder that woke us up at 4 am, it lasted for half an hour and was followed by rain.  That was followed by another rain storm the next night.  I was concerned that the almonds would mold so I picked all of them before the second rain.  I know it doesn’t look like much of a crop but it’s a young tree. 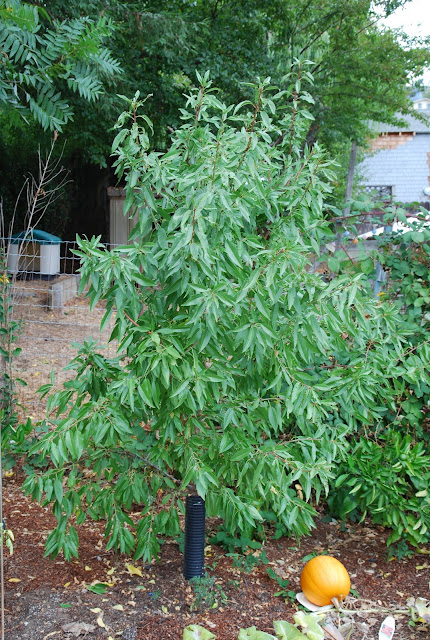 I had to cover the trunk of the tree with this black plastic tubing because the garden supervisor kept thinking it was a scratching post.

Posted by My Recession Kitchen at 11:48 PM