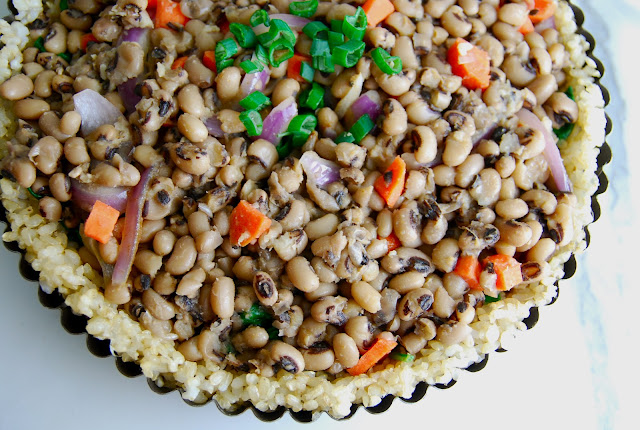 Hoppin’ John is a black eyed peas and rice dish traditionally eaten on New Year’s Day for good luck.  This dish probably originated in West Africa and was brought to the American south during the slave trade by the Africans.  The first written record of this recipe was in The Carolina Housewife, a cookbook written by a Charleston woman in 1847.
The original recipe included long grain rice, small dried beans such as cow peas or black eyes, onion, hot pepper, and smoked ham hock.  Even though I’m not particularly superstitious, I’ve eaten this dish on New Years Day for years, minus the ham.  After all, we can use all the luck we can get, especially now.  Hoppin’ John is usually served with some greens, for financial success. 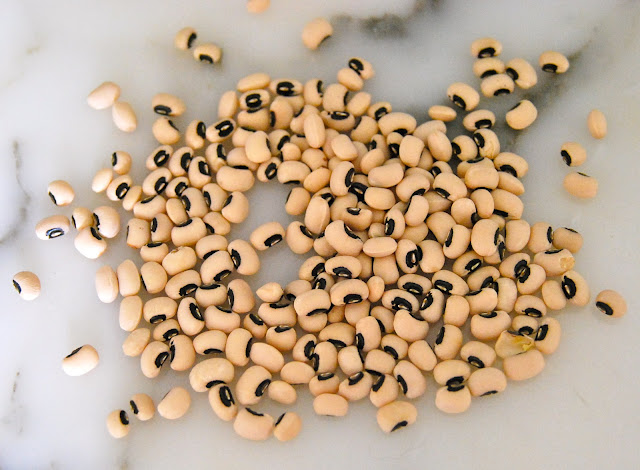 This year I decided to try something a little different.  I wanted to update the dish so I made a Hoppin’ John tart with a brown rice crust.  I used short grain brown rice because it’s more glutenous and would hold together better as a crust.  I filled the crust with spinach I sauteed in garlic (sorry, I forgot to take that picture) before I topped it with the black eyed peas. 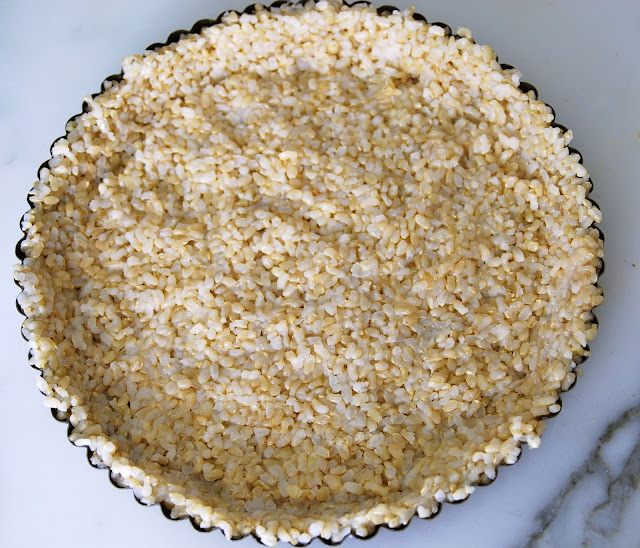 I cooked the peas with onion and carrot for a little color.  You could replace the carrot with a bell pepper, I just happen to be allergic to them.  Since I don’t eat pork, I seasoned the dish with some smoky Spanish paprika.  If you’re going to make this, you really should invest in some Spanish paprika, it’s a wonderful thing!

If you want to know more about the history of Hoppin’ John or Southern “Lowcountry” cooking I suggest you check out John Martin Taylor’s book and blog.
Hoppin’ John Tart
4 servings - Use organic ingredients whenever possible
For the crust:
1 cup short grain brown rice
2 cups water
1/4 teaspoon salt
1 teaspoon oil
Preheat your oven to 375˚
Rinse the rice by covering it with some water, stirring it and then draining it.  Do this three times.
Add the two cups of water to the rice and bring it to a boil.
Cover it and simmer on low for approximately 30 minutes or until all of the water is absorbed.
Add the oil and salt. Stir.
Put the rice into a 9” tart pan and let it cool until you can safely press it (firmly) into into the pan.
Bake the crust for 15 minutes.  Remove it from the oven and let it cool.
For the Hoppin’ John:
1 cup black eyed peas, sorted and rinsed (remove any broken or discolored peas)
1 1/2 cups water
1 1/2 cups vegetable broth
1/2 onion sliced
I carrot, chopped (or sub chopped green pepper)
1/4 teaspoon salt
1/4-1/2 teaspoon smoky Spanish paprika
Put the peas, onion, water and broth in a large pot and bring to a boil.
Turn the heat down to low, cover the pot and simmer for an hour or two until the peas are almost tender.
Check it every half hour, you may need to add more water or broth.
Add the chopped carrot or bell pepper and cook until the peas are tender.
Add the salt and the paprika.
For the Greens:
1 teaspoon oil
1 clove garlic
4 cups spinach, packed
Heat the oil in a frying pan and saute the garlic on low for 2 minutes
Add the spinach and saute, stirring until the spinach is wilted.
Assembly:
Cover the bottom of the rice crust with the spinach
Add two cups of Hoppin’ John to cover the spinach.
Garnish with chopped green onion (optional)
If you have extra Hoppin’ John, save it for a vegetable soup.

Posted by My Recession Kitchen at 9:41 AM