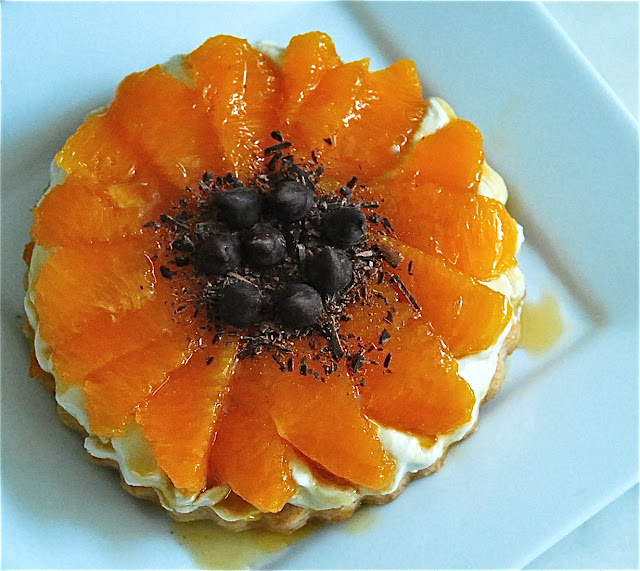 The March Daring Baker’s challenge was hosted by Jennifer of Chocolate Shavings.  She chose Orange Tian as the challenge for this month, a dessert based on a recipe from Alain Ducasse’s cooking school in Paris.

I’d never heard of a Tian before this challenge, evidently it refers to prepared dish with layered ingredients.  It can be a savory casserole or a sweet dessert.  This Tian has six layers, counting the chocolate decoration on top.  The chocolate wasn’t a requirement of the challenge, but as I was hanging over the top of the finished Tian, to take a picture, I thought it looked like a sunflower so I used some chocolate shavings and chocolate chips for the center of the flower.  Chocolate and oranges are one of my favorite food combinations.  I really liked this dessert.  It was light and refreshing and would probably be excellent for Easter.

I cut the original recipe in half which was enough to make three 4 1/2 inch individual servings.  This dessert is made upside down and then turned over after it sets up, so the first, or bottom layer, is made up of orange segments.  Here’s a tutorial on how to segment an orange. http://www.youtube.com/watch?v=ZG5mcEEBlcI  I lined the bottom of the pans with the oranges in a pinwheel pattern. 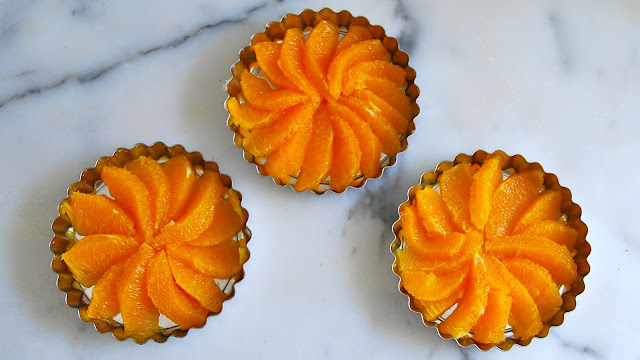 Then I made the orange caramel sauce from 1/2 cup sugar and 3/4 cup of orange juice.

Directions for making the caramel sauce:


Place the sugar in a pan on medium heat and begin heating it.


Once the sugar starts to bubble and foam, slowly add the orange juice. As soon as the mixture starts boiling, remove from the heat and pour half of the mixture over the orange segments.(I waiting until it cooled and thickened up a bit)


Reserve the other half of the caramel mixture in a small bowl — you will use this later to spoon over the finished dessert.


Refrigerate the oranges while you work on the next layer.
Part of this challenge was to make some orange marmalade, which I made the day before.  See yesterday’s post for the recipe.
The next layer is the whipped cream.  Here’s the original recipe cut in half with my substitutions:
Heavy whipping cream 1/2 cup (I used the thick, cream part of a can of coconut milk)
3 tablespoons of hot water
1 1/2 tsp Gelatin (I used agar flakes)
1 tablespoon of confectioner's sugar
1 teaspoon orange marmalade
1/4 teaspoon vanilla extract
In a small bowl, add the gelatin agar flakes and hot cold water, stirring well until the gelatin agar dissolves. Let the gelatin agar cool sit at room temperature for 15 minutes then simmer it for 5 minutes, stirring, to dissolve the flakes.  Let it cool while you make the whipped cream. Combine the cream cold coconut cream and vanilla in a chilled mixing bowl. Whip the cream using a hand mixer on low speed until the cream starts to thicken for about one minute.  30 seconds. Whisk a few tablespoons of the cream into the agar to cool it.  Add the confectioner sugar to the cream and increase the speed to medium-high and whip the cream until the beaters leave visible (but not lasting) trails in the cream, for 30 seconds then add the cooled gelatin  agar mixture slowly while beating continuously. Continue whipping until the cream is light and fluffy and forms soft peaks. Transfer the whipped cream to a bowl and fold in the orange marmalade.

[Tip: Use an ice cold bowl to make the whipped cream in. You can do this by putting your mixing bowl, cream and beater in the fridge for 20 minutes prior to whipping the cream.]
Cover the orange segments with the whipped coconut cream and return them to the refrigerator.
(sorry, I forgot to take of picture of this step)
The next layers are made up of pate sablee (sweet tart pastry) covered with orange marmalade.  Here’s the recipe for the pate sablee and with my substitutions:
1 medium-sized egg yolk at room temperature  (1 heaping tablespoon of nondairy sour cream)
granulated sugar 3 tablespoons
vanilla extract 1/4 teaspoon
Unsalted butter 4 tablespoons; ice cold, cubed (I used Earth Balance non dairy butter)
A pinch of salt
All-purpose flour 3/4 cup
baking powder 1/2 teaspoon
Directions:
Put the flour, baking powder, ice cold cubed butter and salt in a food processor fitted with a steel blade.
In a separate bowl, add the eggs yolks, (non dairy sour cream)  vanilla extract and sugar and beat with a whisk until the mixture is pale. Pour the egg mixture in the food processor.
Process until the dough just comes together. If you find that the dough is still a little too crumbly to come together, add a couple drops of water ( I needed to add 1 teaspoon of rice milk) and process again to form a homogenous ball of dough. Form into a disc, cover with plastic wrap and leave to rest in the fridge for 30 minutes.
Preheat your oven to 350 degree Fahrenheit.
Roll out the dough onto a lightly floured surface until you obtain a ¼ inch thick circle.
Using your cookie cutter, cut out circles of dough and place on a parchment (or silicone) lined baking sheet. Bake for 20 minutes or until the circles of dough are just golden. 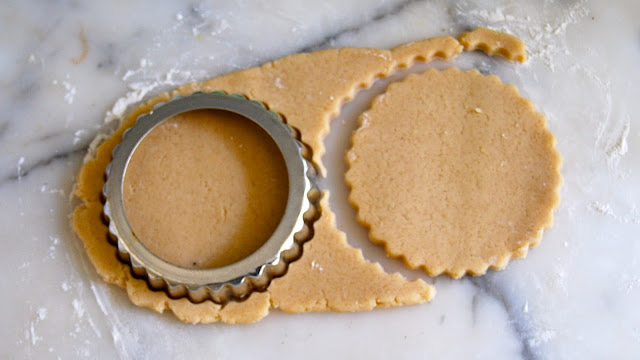 When the pastry discs have cooled, spread some orange marmalade on them. 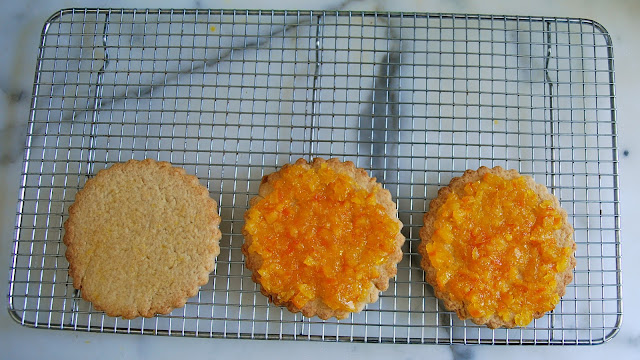 Cover the whipped cream layer with the pate sablee and marmalade, with the marmalade side down.  Freeze the Tians for 10 minutes and then invert them on a plate and 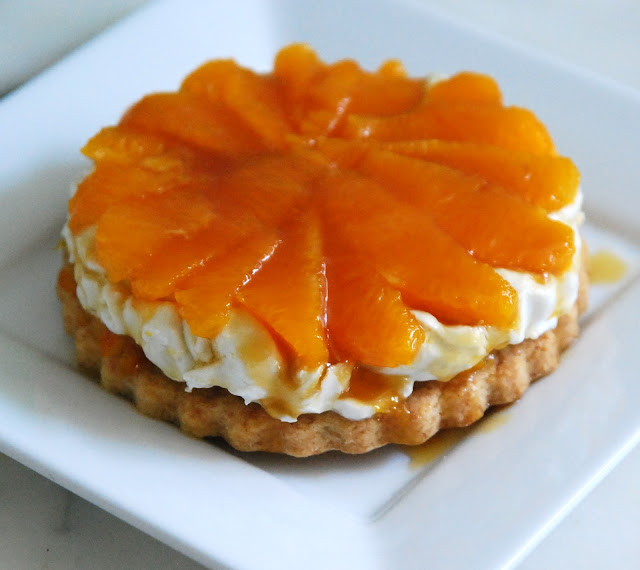 Posted by My Recession Kitchen at 3:51 PM