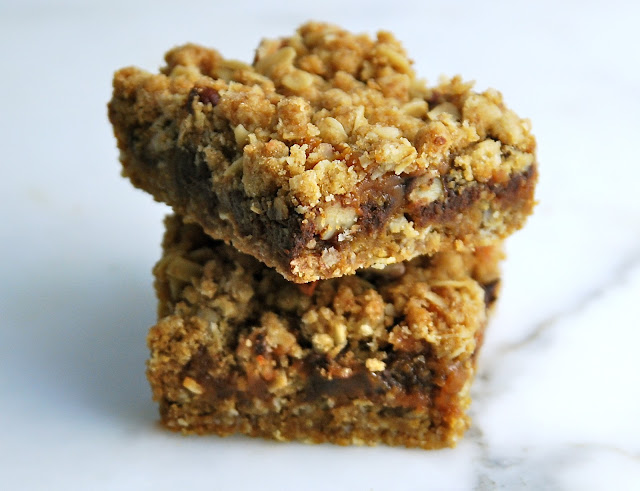 Yesterday was our annual, end of summer block party.  It’s one of two yearly events where everyone on the street gets together for a little food, drink and conversation.  At the end of every summer we meet in the cul de sac for a potluck BBQ.  My contribution this years was oatmeal carmelitas.  It’s my go to dessert recipe for big gatherings.  Everyone loves them and they travel well.
I haven’t made them in awhile because they call for caramel sauce and I haven’t been able to find one that’s made without butter and cream.  I didn’t want to stop making this family favorite so I decided to make my own caramel sauce.  Yes, it’s not as quick and convenient as buying a jar of the stuff, but it is a lot less expensive and cholesterol free.
The trick to making your own caramel sauce is having everything you need ready at your stove.  A cup of sugar, 6 tablespoons of Earth Balance Butter substitute and 1/2 cup of cashew cream and a whisk.  It’s important that you use refined white sugar.  Raw sugar has too many impurities and won’t caramelize properly. I make the cashew cream from a cup of raw cashews that have been soaked in water for a couple of hours or more, drained, put into a high speed blender with a half cup of water and blended on the highest speed for 30 seconds.  You can find detailed instructions for making perfect caramel sauce here on David Lebovitz’s website.  I used the “dry method”.  I have to say, making caramel with butter and cream tastes better than my vegan version,  I think it’s the Earth Balance butter substitute, it’s just not as sweet as the real thing. 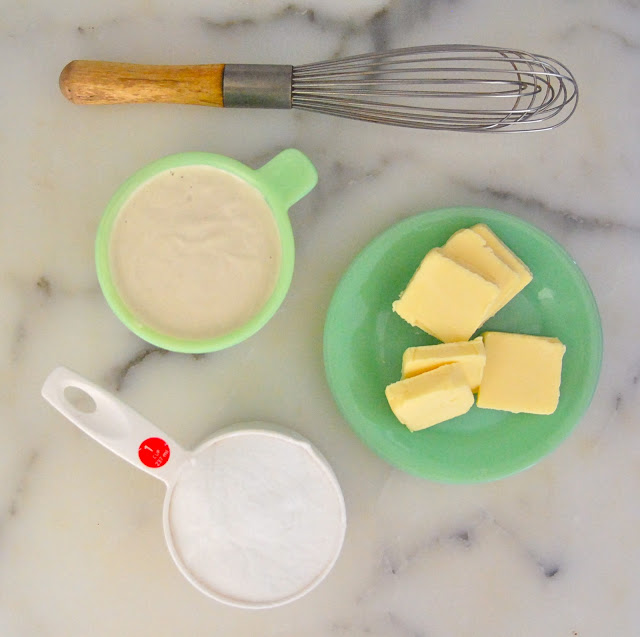 I adapted the recipe for the carmelitas from a Pillsbury “Bake Off” winning recipe that I found on the web years ago.  Once you taste them, you’ll understand why this recipe won.
You start with a crumble made from flour, oats, brown sugar and butter.  Divide the crumble in half and press half of it into a 13 x 9 pan, and then bake it for 10 minutes. 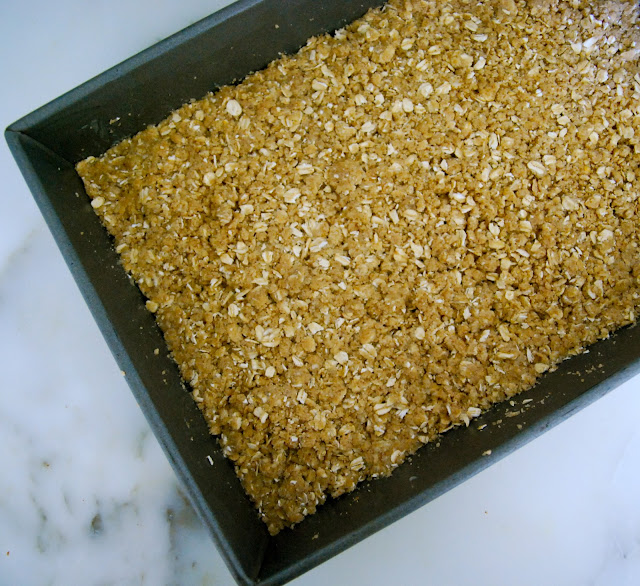 Then you sprinkle a bunch of chocolate chips and pecans over the baked crust. 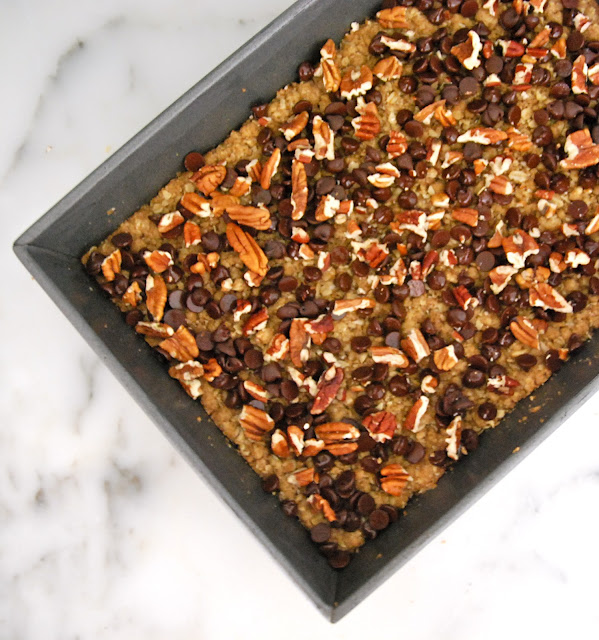 The caramel sauce is drizzled over the top of all of this.  (looking at this makes me want to make another batch.) 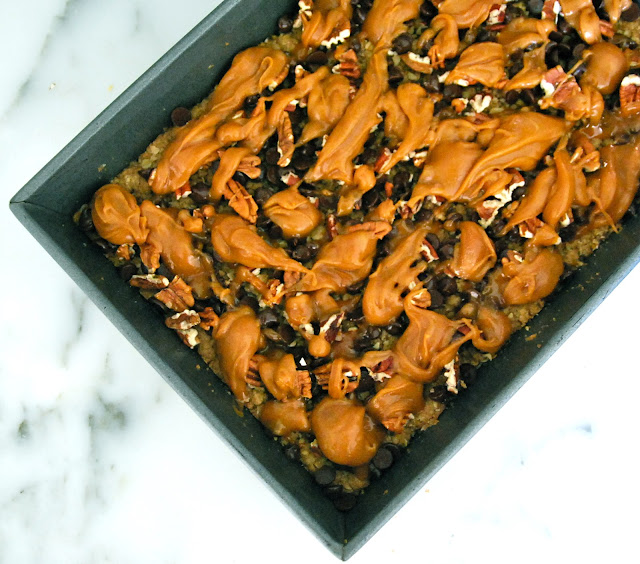 and then you sprinkle the other half of the crumble over the top of everything and bake it for another 20 minutes. 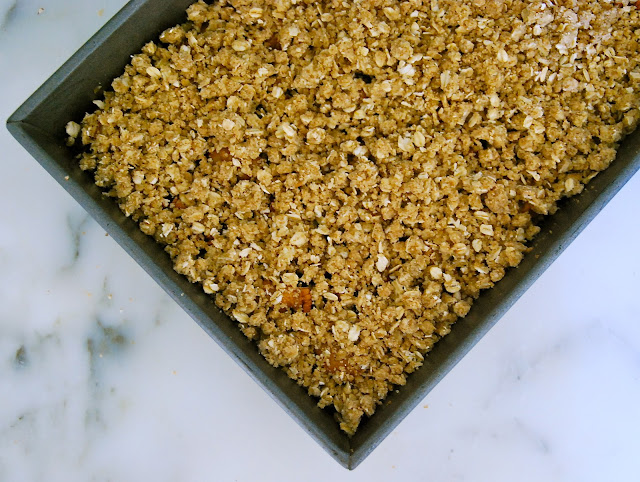 The carmelitas were a big hit.  Everyone had a good time, including the kids. 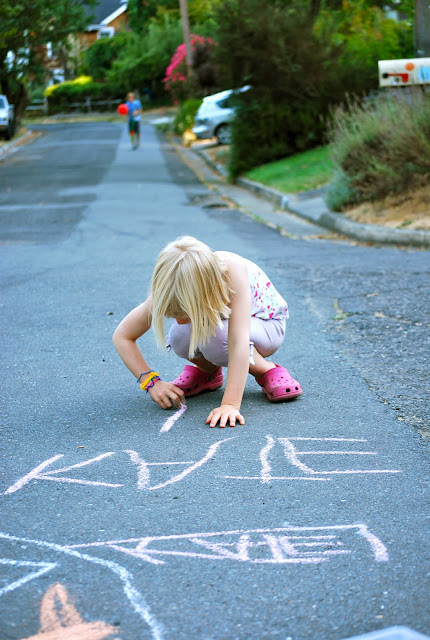 Preheat your oven to 350˚
Grease a 9x13" pan.
Mix all of the crust ingredients in a bowl at a low speed.
Press half of the crust mixture in the bottom of the pan.
Bake for 10 minutes and remove from oven.
Mix the caramel sauce with the 3T of flour.
Sprinkle the chocolate chips and nuts over the baked crust.
Drizzle the caramel mixture over the nuts and chips.
Sprinkle the remaining crust mixture over the top.
Bake for another 20 minutes or until golden brown on top.
Cool for at least 1 hour.
Refrigerate for another hour before cutting.

Soak the cashews in water for 2 hours
Drain and put in a high speed blender with 1/2 cup water.
Blend on high for 30 seconds until creamy
Melt the sugar in a pot over a medium heat.
(see detailed explanation on David's website, link above)
When caramel is liquid and golden brown, add butter and 1/2 cup cashew cream, stirring carefully.
Allow to cool while you are making the carmelita crust.

Posted by My Recession Kitchen at 1:43 PM