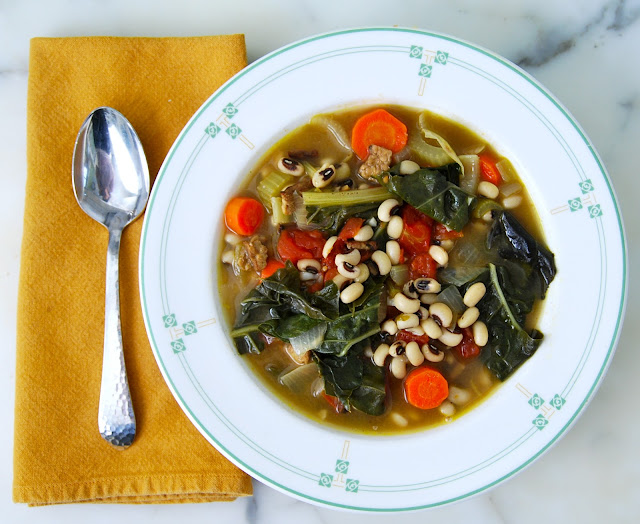 Happy New Year Blog friends!  For a number of years now, I’ve been cooking black eyed peas for New Year’s Day dinner.  Last year, I made them into a tart with a brown rice crust.  (see link at the bottom of the page) Eating black eyed peas on New Year’s Day is thought to bring prosperity.  It’s not that I’m really superstitious, it’s just that it’s a very old tradition and I’m fascinated by the history of food.
Black eyed peas are also an inexpensive, healthy protein that is high in calcium, vitamin A and folic acid.  Since I can no longer eat dairy products, finding non animal foods high in calcium is important.
This recipe was adapted from America’s Test Kitchen’s Tuscan White Bean Soup.  I love that they tested all the ways to cook beans and discovered that cooking beans in salted water produces mealy beans, but soaking the beans in salted water makes them more tender and less likely to break. 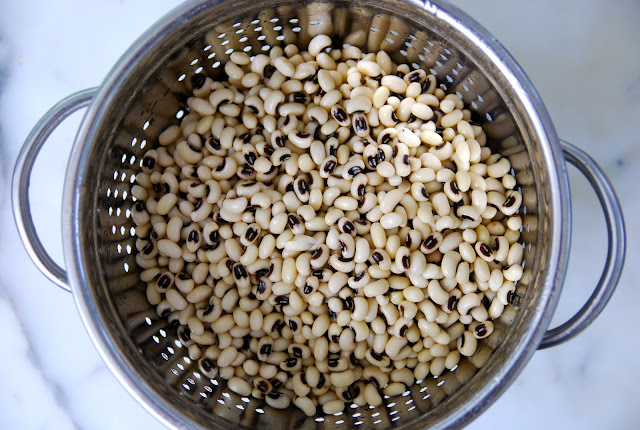 You start by soaking the beans in a salt water bath for 8 to 24 hours and then rinsing them to remove the salt.  The original recipe called for white beans which I replaced with black eyed peas and pancetta, a type of dried cured pork, which I replaced with Fakin Bacon.  This is a soy tempeh product that has the smoky tasted of bacon.  I chopped the soy bacon into little pieces and cooked it according to their directions until it was crisp and browned. 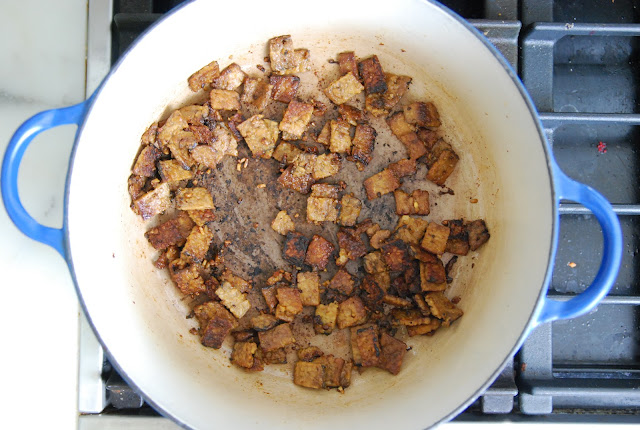 Then I chopped up an onion, some celery and two carrots. 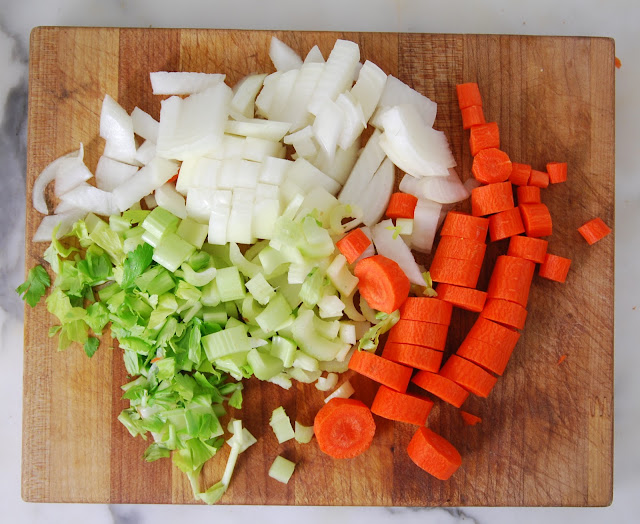 I added these to the fake bacon, along with an extra tablespoon of olive oil because the fake bacon won’t release fat like real bacon does. 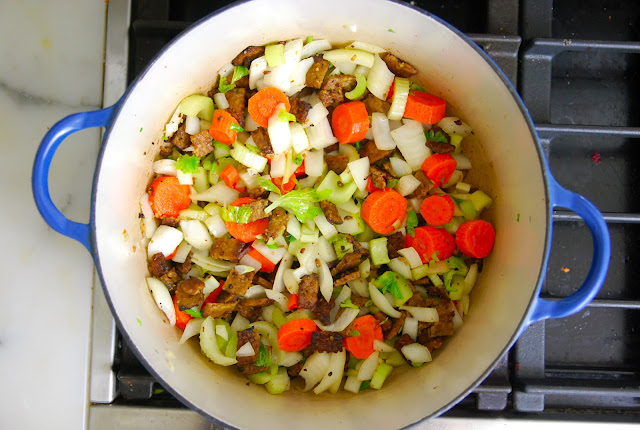 After sauteing the vegetables for 15 minutes you add the beans, the broth, some water and seasonings.  However, rather than boiling these ingredients, like you would normally do when making a soup, the folks at the test kitchen have you bake the soup.  Yes, I said “bake the soup” in a 250° oven for an hour.

At this point, you remove the soup from the oven and add chopped tomatoes and greens and bake it for another 30 minutes.
The original recipes calls for kale, but I used chard instead since I had some growing in the garden.  It’s one of the few things that the frost hasn’t killed. 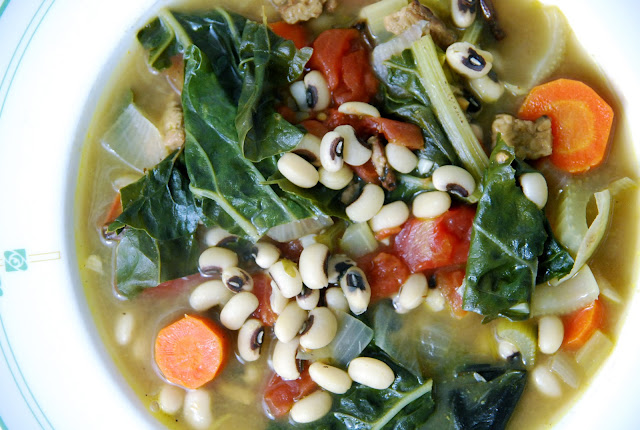 In a large Dutch oven, heat 1 tablespoon of the oil over a medium heat.
Cut the Fakin Bacon into 1 inch pieces.
Add the fake bacon to the oil and cook for 6-10 minutes or until the edges are crisp and browned.
Preheat your over to 250°
Chop the onion and celery into small pieces.
Peel and cut the carrots into 1/2 inch rounds.
Add the vegetables to the pot with the second tablespoon of oil and cook for 15 minutes.
Drain the beans and rinse well.
Add the beans to the pot along with the broth, water and bay leaves.
Bring to a simmer, cover the pot and then transfer it to the preheated oven.
Let the soup bake for 60 minutes.
Drain and rinse the diced tomatoes.
Remove the pot from the oven and stir in the tomatoes and the greens.
Re-cover the pot and return the soup to the oven and bake it for another 30 minutes.
Remove the soup from the oven, remove the bay leaves and test the beans to be sure they are tender.
Add salt and/or pepper to taste.
Let the soup stand covered, off heat, for 15 minutes before serving.

Posted by My Recession Kitchen at 8:42 PM

Email ThisBlogThis!Share to TwitterShare to FacebookShare to Pinterest
Labels: Soup