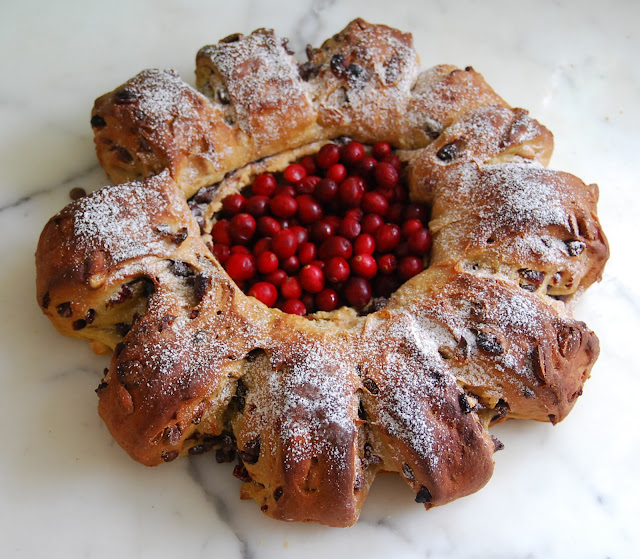 The 2010 December Daring Bakers’ challenge was hosted by Penny of Sweet Sadie’s Baking.  She chose to challenge Daring Bakers’ to make Stollen.  She adapted a friend’s family recipe and combined it with information from friends, techniques from Peter Reinhart’s book........and Martha Stewart’s demonstration.
Stollen bread was first made in Dresden, Germany in the early 1400’s.  It was shaped into a loaf to represent the baby Jesus wrapped in swaddling clothes.  The early stollen breads were rather tasteless because they were made during Advent, when the use of butter or milk was banned.  Eventually, the Pope allowed the use of butter and eventually dried and candied fruits were used to sweeten the bread.
My family is not fond of candied citrus fruit, so I went in a different direction.  I used the zest from two oranges (you want to be sure to use organic fruit when you’re using the peel) and some orange juice and eliminated the candied fruit altogether.  I substituted cranberries for the more traditional raisins and added some chocolate chips.  (I knew Mr. RK would help me eat it if chocolate was involved) 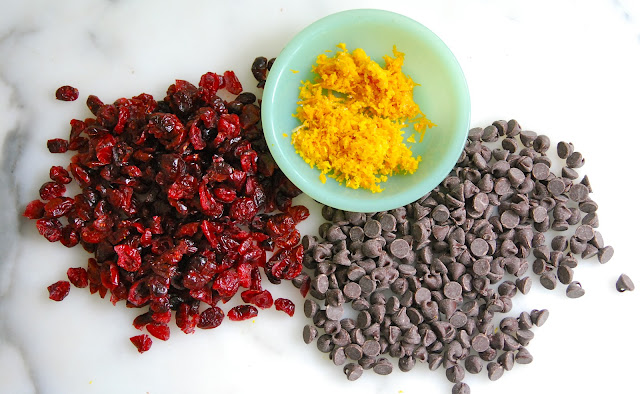 Because I’m allergic to eggs, I used Bob’s Red Mill Egg Replacer in place of the eggs, but I mixed the powder with fresh orange juice instead of water to kick up the orange flavor.   I also added some almond halves along with the cranberries.
In this recipe, you activate the yeast and add it to the flour and milk along with a little sugar, dried fruit, nuts and orange zest. You need to plan ahead because the dough needs to rest in your refrigerator overnight for a slow rise. 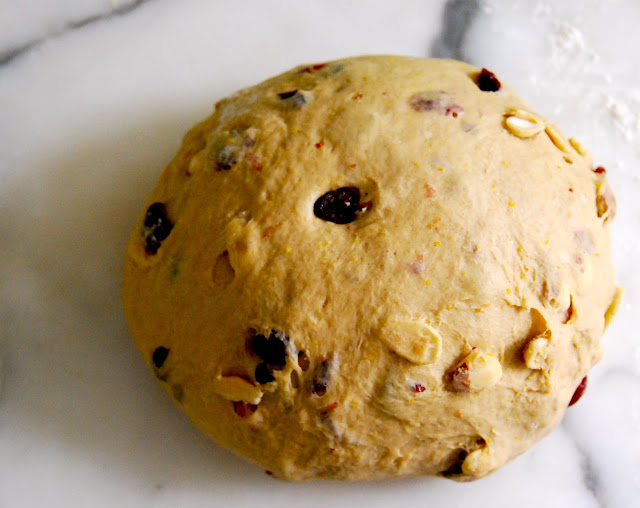 The next morning, you allow the dough to warm up at room temperature for a few hours before you punch it down and roll it out. 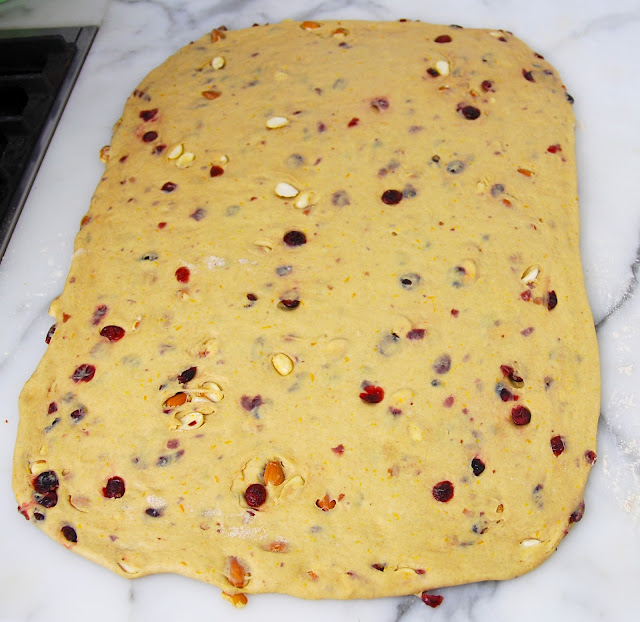 This is where I added the chocolate chips.  I know, chocolate chips are not traditional in a stollen but it tasted so good with the orange and cranberries. 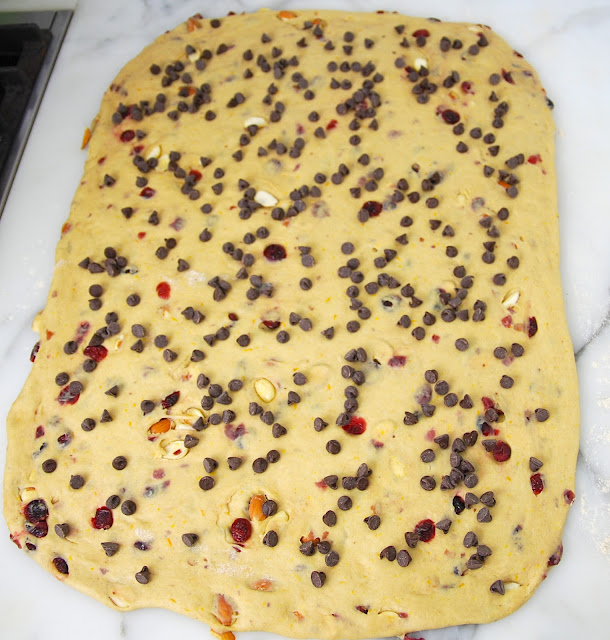 The next step is to roll up the dough, starting with the long side. 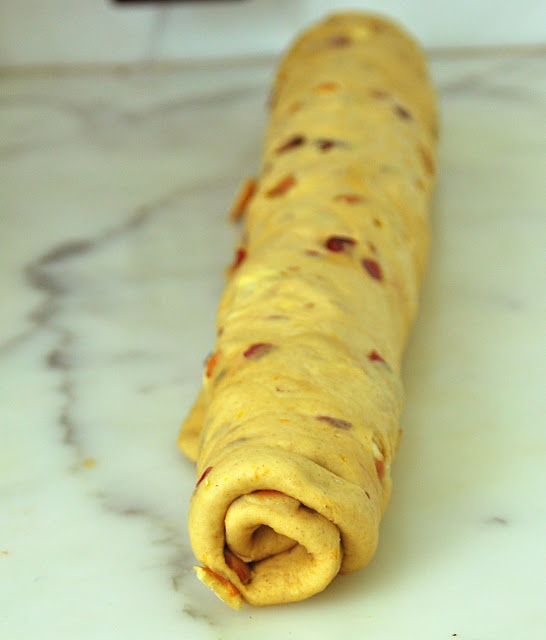 Then, you form it into a ring by inserting one end into the other and pinching it together. 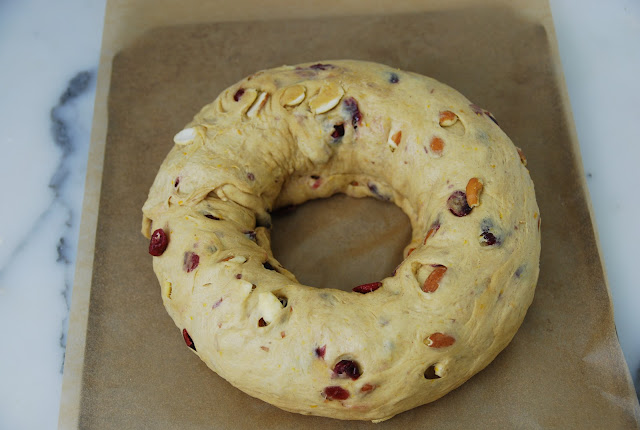 Next, using a scissors, you make cuts about 2/3 the way through the ring, every two inches. 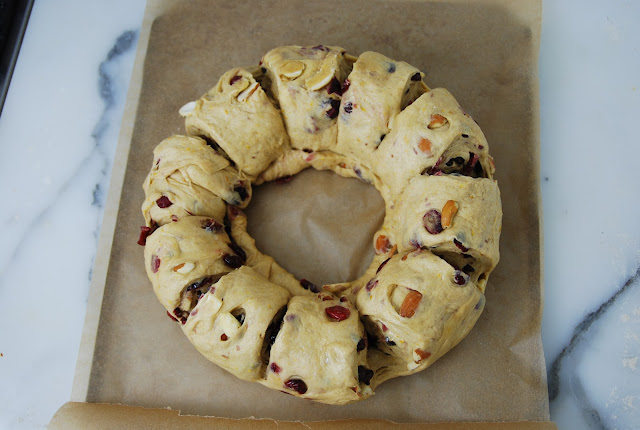 You let the dough rise for another hour or two before you bake it.  Helpful hint: after you roll the dough, be sure that the edge of the dough is centered under the roll before you form the ring and cut it.
When it was done, I bushed the top of the warm stollen with some melted Earth Balance and dusted it with powdered sugar.  Traditionally, stollen is heavily coated with powdered sugar but I think a light coating looks better and who needs all that sugar??  I filled the center with some fresh cranberries for a nice presentation. 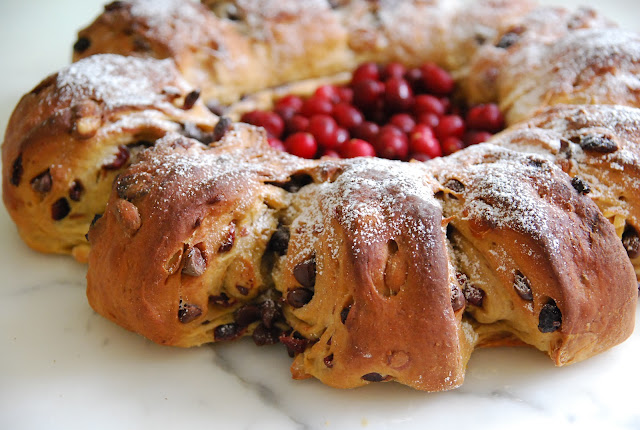 I’d never baked a stollen before, because the candied fruit thing put me off.  However, I think I may have started a new holiday tradition, because this variation was delicious, especially when it’s toasted. 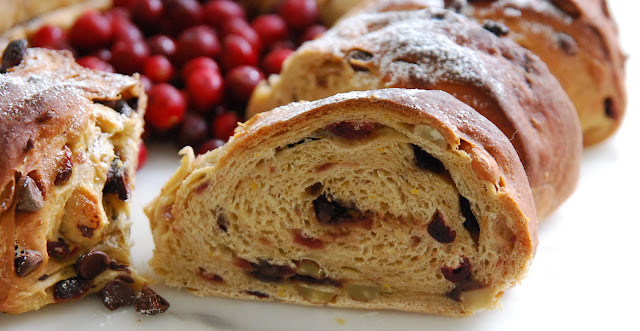 Orange Cranberry Chocolate Stollen
20 toaster sized slices - Use organic ingredients whenever possible
2 large organic oranges
I cup dried cranberries
1/4 cup luke warm water (about 110°)
2 packages active dry yeast
1 cup rice milk (or any non dairy milk)
10 tablespoons Earth Balance butter substitute
3 tablespoons Bob’s Egg Replacer
2 teaspoons vanilla extract
5 1/2 cups unbleached all purpose flour
1 cup sliced almonds
1/2 cup raw sugar
1 cup chocolate chips
1 tablespoon Earth Balance melted for brushing the top.
Powdered Sugar for dusting the top.
Remove the zest from the oranges and set aside.
Juice the oranges, you should have about 3/4 cup.  (If it’s not quite enough add a little water)
Put the cranberries in a small bowl and pour 3 tablespoons of the orange juice over them and set aside.
Pour the warm water in a small bowl and sprinkle the yeast over the water and stir to dissolve.
Let the yeast rest for 5-10 minutes or until it’s foamy.  (If it doesn’t foam up, start again with new yeast)
In a small pot, warm the rice milk and Earth Balance over a low heat until it’s melted.
Remove from the heat and let it cool to lukewarm.
Put the remaining 9 tablespoons of orange juice in a bowl with the egg replacer and whisk for 1 minute.
Add the orange zest and the vanilla extract and whisk until incorporated.
In a large mixing bowl (or the bowl of an electric mixer with the paddle attachment) stir together the flour, sugar and almonds
Stir the egg mixture into the cooled milk mixture.
Pour the liquids into the flour and stir on low speed for two minutes. It should form a soft but not sticky ball.
Cover the dough with a cloth and let it rest for 10 minutes.
Knead the dough by hand for 8 minutes or with the dough hook in an electric mixer for 6 minutes)
Lightly oil a large bowl and transfer the dough to the bowl, rolling the dough to coat it with oil.
Cover the bowl with plastic wrap and put it in the refrigerator overnight.
Remove the dough from the fridge and let it warm up at room temperature for 2 hours.
Punch down the dough and roll it out into a rectangle about 16” x 24”.
Sprinkle the chocolate chips evenly over the dough.
Starting with the long side, roll the dough up tightly, forming a long cylinder.
Line a cookie sheet with parchment paper.
Transfer the rolled dough to the parchment paper with the edge down.
Form it into a circle inserting one end into the other, pinching the dough to seal it.
Using a kitchen scissors, make cuts every two inches, cutting 2/3 of the way through the dough.
Mist the dough with spray oil and cover loosely with the plastic wrap.
Proof for approximately 2 hours at room temperature or until it’s 1 1/2 times it’s original size.
Preheat your oven to 350°
Bake the stollen for 20 minutes, then rotate the pan and continue to bake for another 20-30 minutes.
The stollen should be a dark mahogany color and sound hollow when thumped.
Transfer to a cooling rack and brush the top with melted Earth Balance.
Immediately sprinkle the top with powdered sugar, wait one minute and sprinkle it again.
Let the stollen cool for at least an hour before cutting it.

Posted by My Recession Kitchen at 6:34 PM