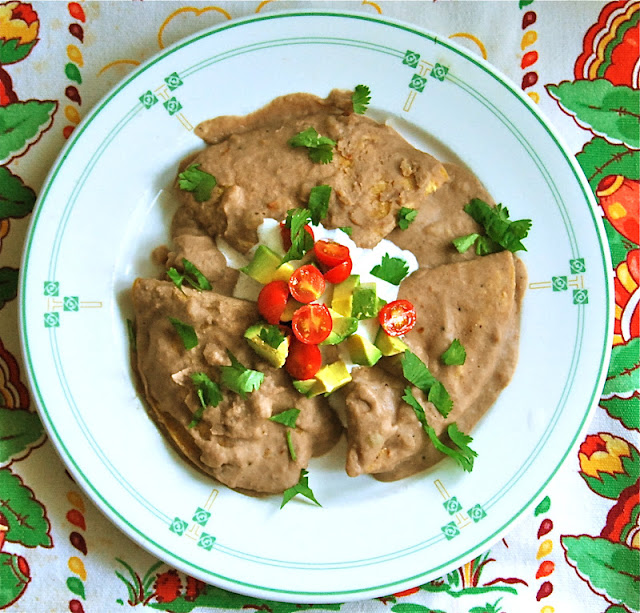 Inspired by our recent trip to Mexico to visit with a long time friend and my love of Mexican food, I made some enfrijoladas.  The recipe came from a book my friend owns called “Mexico The Beautiful Cookbook”.  It’s filled with amazing pictures of authentic recipes from the different regions of Mexico.  I copied many of these wonderful sounding recipes for future potential dinners.
There are several ways you can go about making this recipe.  You can take the easy route, which is to buy canned beans or you can go with the more traditional method, which is to cook your own beans.  There are several really good reasons why I think you should cook the beans yourself.  First, it’s a lot less expensive.  The second and most compelling reason is that most canned beans contain BPA, a chemical which comes from the plastic lining in the cans.  I’ve talked about this before in previous posts,  BPA has been linked to cancer, impaired fertility, and insulin resistance.  The Centers for Disease Control tested a group of 400 Americans and found that 95% of them had BPA in their urine.  That is seriously scary!  If you really don’t have the time to cook beans, then buy Eden brand.  They are the only canned beans that are packed in BPA free cans, but they are also the most expensive.
Start by sorting your beans, which simply means removing any broken or weird ones and checking for rocks.  Rinse the beans in a colander to remove any dirt and then put them in a bowl and cover them with cold water.  Throw out any floaters.  You can soak the beans over night or for at least 3 hours. 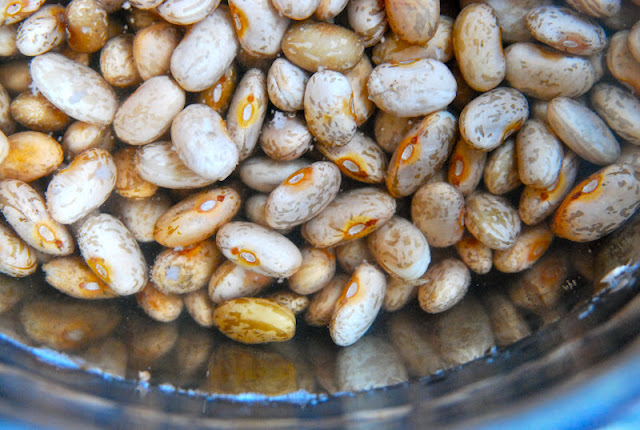 Next, drain the beans and put them into a pot with some onion and oil and cover them with fresh water.  Bring the beans to a boil, cover them, and cook them over a medium heat for about 1 to 1 1/2 hours or until tender.  You need to check them periodically to be sure they have enough water. 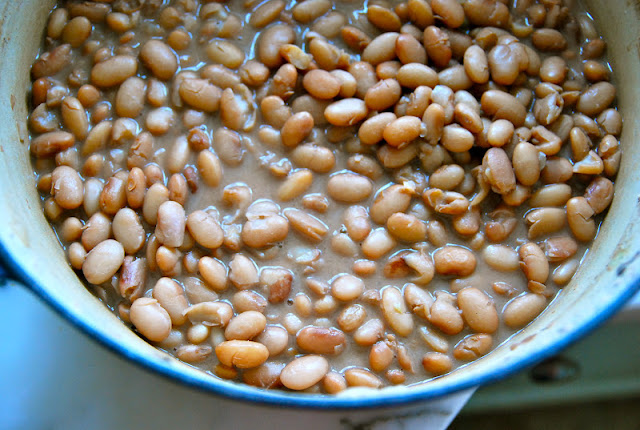 When they’re tender add the salt, chilies and epazote.  Epazote is an herb that has been used by the Mexicans/Aztecs for centuries in their beans.  It helps to eliminate the gassiness of beans.  It’s an herb that has no substitute so if you can’t find it, just leave it out like I did.

The next step is to make a puree or sauce out of the beans by putting them in your blender with some extra water to get it to the proper soupy consistency. Saute a little more onion (I added garlic too) in a pan and then pour in the beans. Simmer them over a low heat.  You can add more chilies if you like.
The recipe says to cook the tortillas in a 1/2 inch of oil...but that’s just way too much oil and really not necessary.  I just sprayed the pan with a little oil before I heated each tortilla for about 30 seconds on each side and then dipped them in the bean sauce before folding them in quarters.  (These pump oil spray cans are wonderful because you add your own oil and no chemical propellants are needed) I’d like to encourage you to buy tortillas made with organic corn.  If you don’t you can be almost certain that the corn used to make them was genetically modified.  That means they have altered the genes, often buy splicing in some pesticides.  GMO corn has been found to cause a whole list of health issues in the mice that ate it.  Think about it.  Also, look for a future post on making your own tortillas! 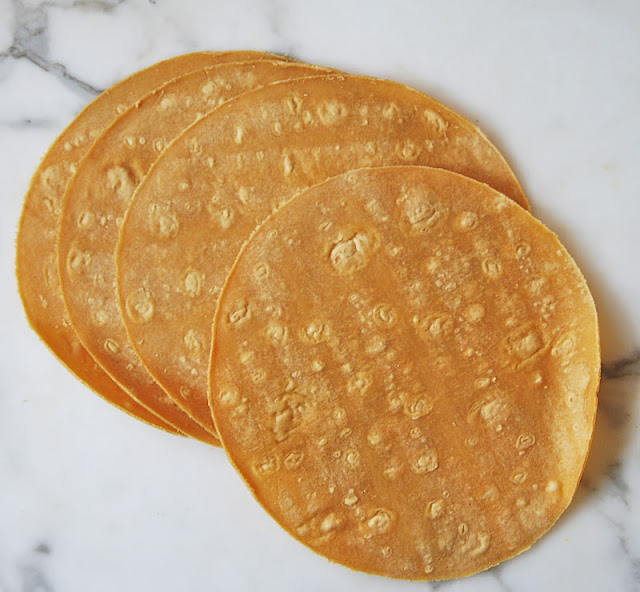 Now here’s where your creativity comes in...you can put a little filling in the tortillas after you dip them in the beans.  Use your favorite chopped protein or a combination of things like spinach, tofu and cheese would be tasty.  It’s the same thing with the toppings.  I used a tablespoon of non dairy sour cream, some avocado and cilantro.  Our you could just add the protein to the toppings.  Next time I’m definitely adding a tablespoon of fresh salsa for a little kick and maybe a sprinkle or two of fresh lime juice. 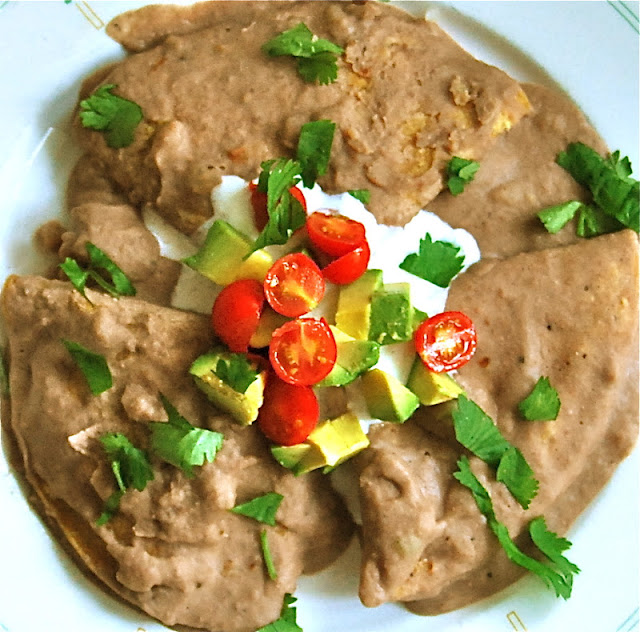 Enfrijoladas
Makes 4 servings - Use organic ingredients whenever possible
Adapted from Mexico the Beautiful Cookbook by Susanna Palazuelos
For the Frijoles:
2 cups dried pinto or black beans
10 cups water
1/3 cup chopped onion
3 tablespoons expeller pressed oil (sunflower, safflower or corn)
1 sprig epazote
1 1/2 teaspoons salt
2 Serrano chilies
Look over your dried beans and remove any rocks or broken or moldy beans.
Rinse the beans, cover with room temp water and let soak for at least 3 hours.
Discard any beans that float and drain.
Place the beans in a large pot and add the water, onion and oil.
Cook, covered over medium heat, for 1 ½ - 2 hours or until tender
Make sure that there is always enough water to cover the beans, adding more hot water if needed.
When the beans are tender, uncover, and add the  epazote, salt, and chilies.
Enfrijoladas
4 cups beans with their liquid
1 tablespoon oil
1/2 cup chopped onion
1 clove garlic
Spray oil for frying
12 corn tortillas
4 tablespoons non dairy sour cream
4 tablespoons fresh salsa
1 avocado, peeled and chopped
For garnish:
Cherry tomatoes and cilantro
In a blender, puree the frijoles with their liquid.
The mixture should be the consistency of a sauce, if it’s too thick add up to a ½ cup water.
Chop the onion and garlic very fine.
Heat the oil in a skillet and brown the onion and garlic slightly.
Add the pureed beans and simmer for 2 minutes.
Heat a skillet and spray it with a little oil and fry each tortilla for about 20 seconds on each sides
Immerse the tortilla in the bean puree and fold in half and fold in half again to form a triangle
Transfer to a plate (arrange three on a plate)
Spoon on a little bean puree and top with sour cream, salsa, cilantro, avocado and tomatoes.

Posted by My Recession Kitchen at 8:18 PM