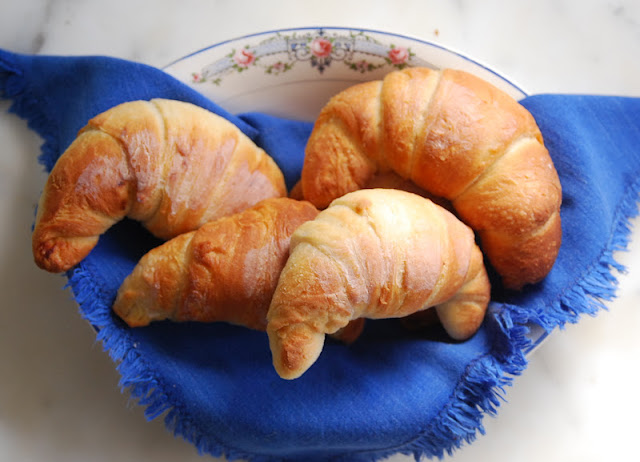 The Daring Bakers go retro this month!  Thanks to one of our very talented non-blogging members, Sarah, the Daring Bakers were challenged to make Croissants using a recipe from the Queen of French Cooking, none other than Julia Child!
Sarah wasn’t kidding when she said that the most difficult part of this challenge was the time it takes to make them.  It took about 12 hours, on and off, about a day and a half.  You really have to plan ahead!  My other challenge was to make them without butter and still have them be light and flaky.
You start by mixing the yeast with some warm water and a little sugar (I used agave).  This first step is important because if your yeast is not “active” you don’t want to go any further.  You’re going to have to start over with new yeast.  The water needs to be warm but not so warm that it kills the yeast (about 90°).  It should get foamy in about 5 minutes or so, if not, start over. 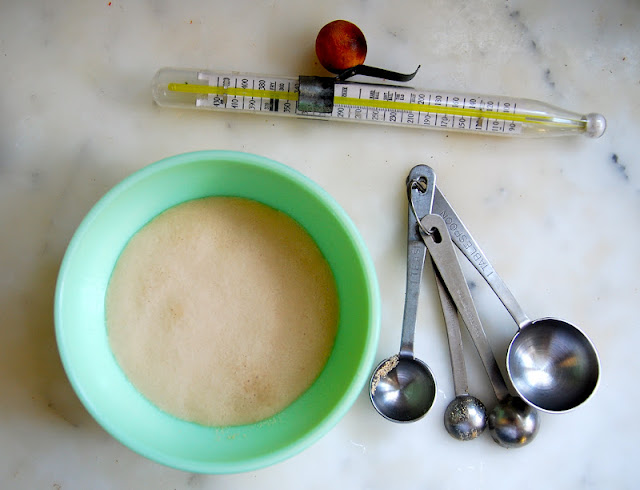 While I waited for the yeast, I warmed some rice milk and mixed in a little more agave and some oil.  I didn’t add the salt because the Earth Balance butter substitute I would be using later is very salty.  When I knew the yeast was “active” I added it to the warm milk mixture along with some flour. 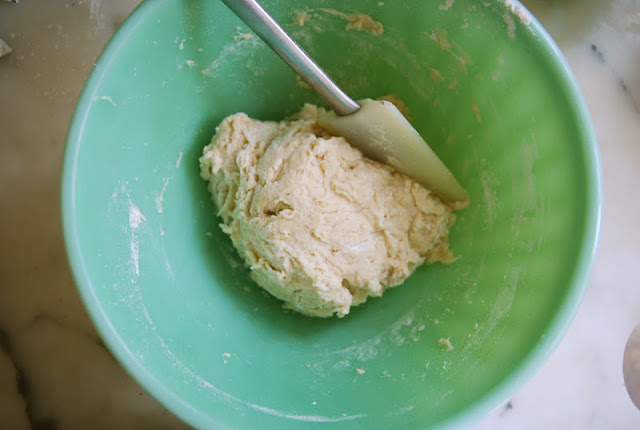 Then you let the dough rest a few minutes on a floured board before you knead it 8-10 times by tossing it down and picking it back up.  You can watch Julia explain exactly how to knead the dough here: 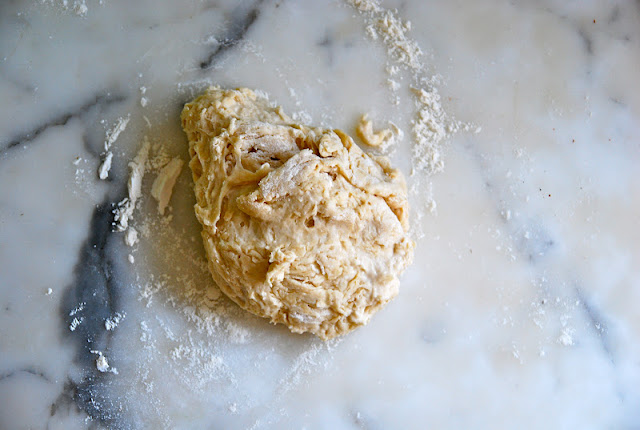 Put the dough back in a clean bowl and let it rise for 3 hours or until it’s tripled in size. 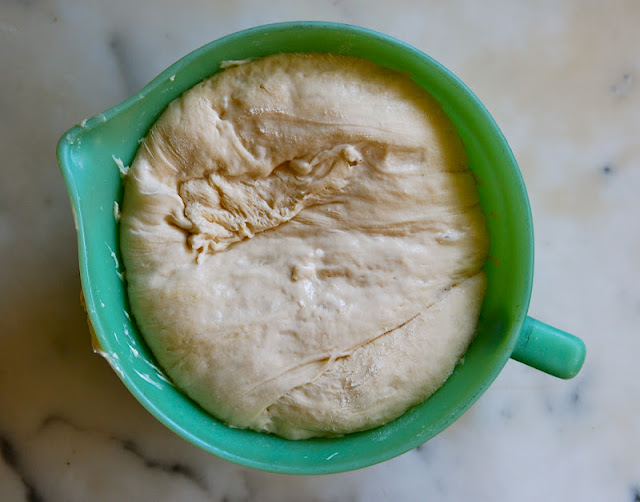 After the dough has tripled, place it on a floured board and press it out into a 8”x12” triangle. 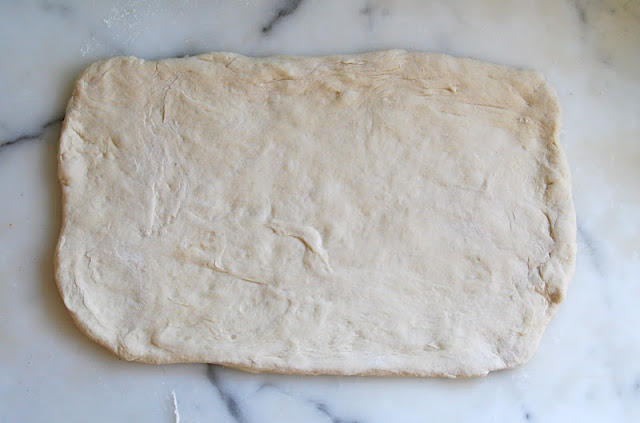 Fold the dough in thirds and put in back in the bowl, cover it and let it sit for another hour and a half, or you can put it in your refrigerator, overnight, and start again in the morning.  That’s what I did. 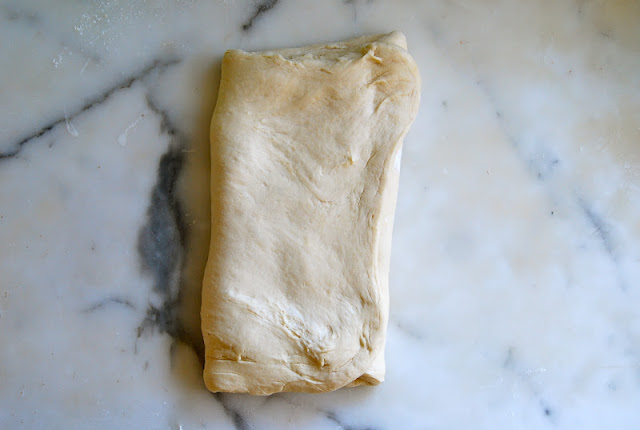 In the morning, before removing the dough from the fridge, prepare the butter by flattening it with a rolling pin.  Since I shouldn’t eat butter, I used Earth Balance, a butter substitute.  This product comes in two forms, sticks and whipped.  I wanted to use the sticks but my store was out so I used the whipped instead and I think this was a big mistake.  I’m not sure exactly how this stuff is made but I think they must whip water into it because my dough got very wet when I worked it between rises and I had to incorporate more flour than I thought I should.  The finished croissants were a little dry...or I may have baked them too long...or maybe it was a combination of both of these reasons.  The point is that you should use the sticks and not the whipped stuff because it makes a difference. 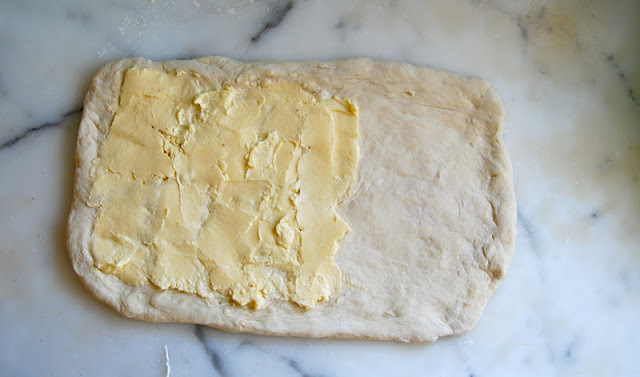 Using your hands, press the dough out to make an 8”x14” triangle again.  Spread the flattened butter over two thirds of the rectangle. 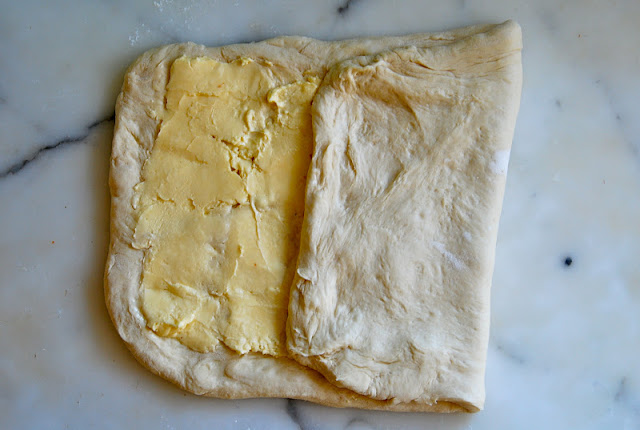 Fold it in thirds, and then roll it out again to a 8”x14” rectangle. Do this carefully so you don’t push the butter out of the dough.  Fold it in thirds, again and put it back in your fridge for two hours.  After two hours take it out and deflate it by tapping it with a rolling pin and let it rest for 10 minutes.  Then, you need to roll it out to an 8”x14” rectangle and fold in it thirds two more times.  Then it goes back in the fridge for another two hours.
Now, finally, you can make some croissants.  Roll the dough out to a 20”x5” rectangle.  Cut it so you have two 10”x5” rectangles and refrigerate one of them.  Roll the other one out until it’s 15”x5” and cut it into 3 equal 5” squares.  Put two of the squares back in your fridge to keep the butter cold.  Cut the third square diagonally to create two triangles.  Stretch out the triangle some and starting with the wide end, roll up the dough to form a croissant.  Repeat the process with the rest of the dough.  You should end up with twelve.  My croissants didn’t roll very neatly because the dough was still damp, even though I’d added lots of extra flour. 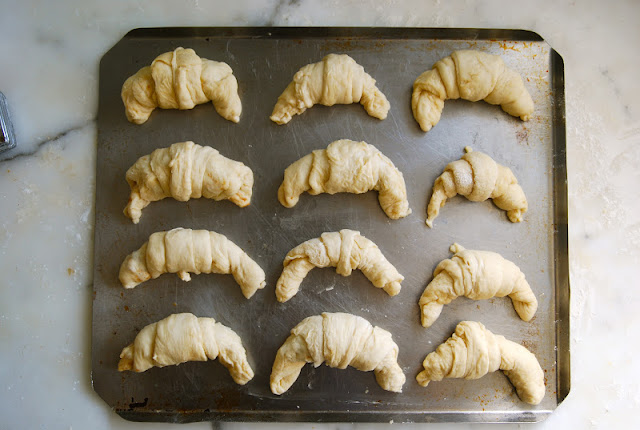 I wanted to fill some of the croissants.  Normally, I would have filled them with chocolate but I’d just harvested a big basket of gala apples so I opted for an apple filling. 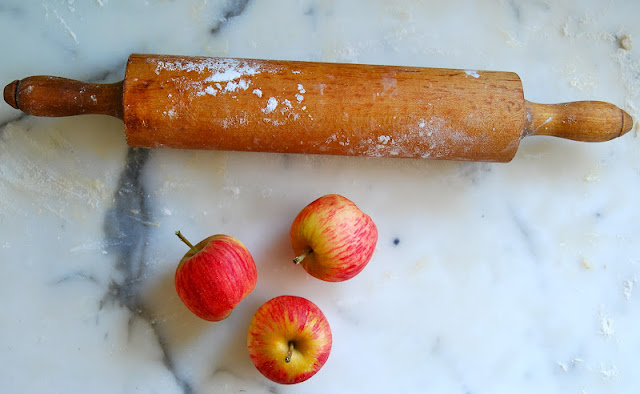 I used some peeled chopped apples, a little coconut palm sugar, cinnamon, raisins, cornstarch and a bit of applesauce to hold everything together. 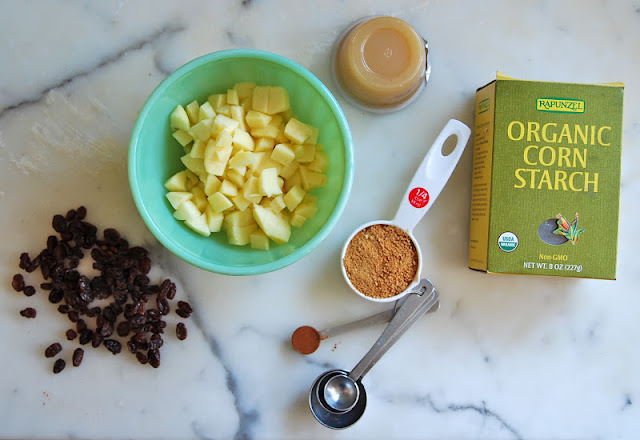 Once you’ve finished the croissants, you let them rise one more time, for an hour before you bake them at 475° for 12 to 15 minutes. 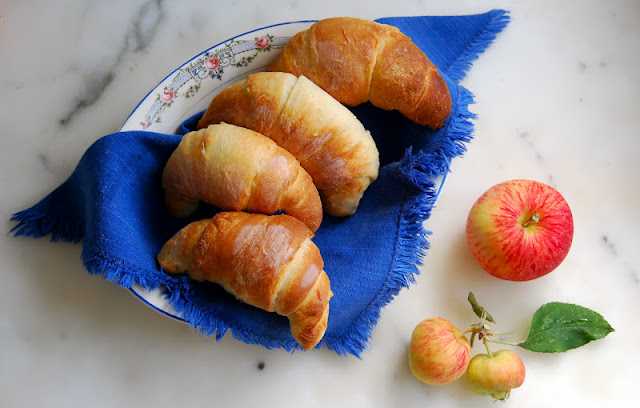 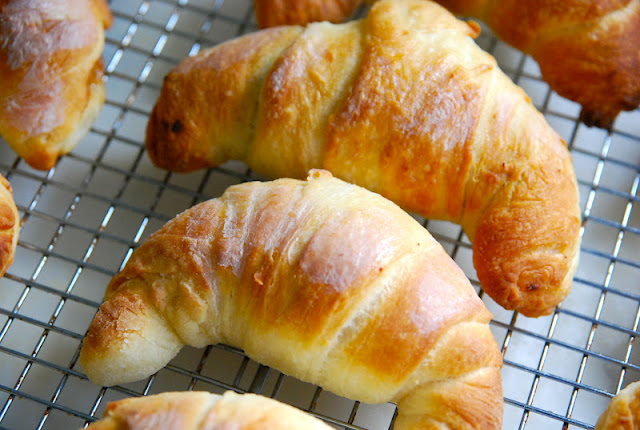 The apple filling was delicious. It helped to offset the dryness of the croissant.  I’m going to have to try these again with the correct butter substitute. 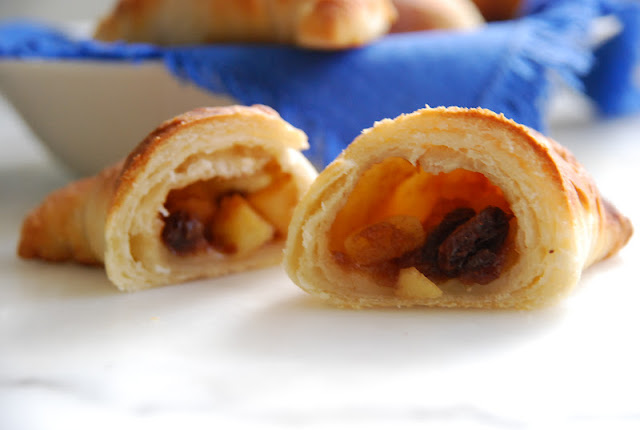 Posted by My Recession Kitchen at 9:06 PM