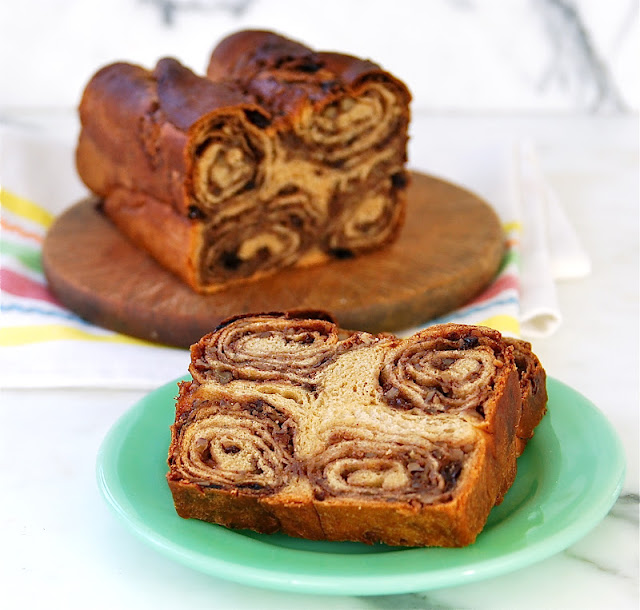 The Daring Baker’s October 2011 challenge was Povitica, hosted by Jenni of The Gingered Whisk.  Povitica is a traditional Eastern European Dessert Bread that is as lovely to look at as it is to eat!
Povitica (pronounced po-va-teet-sa) is traditionally served during the holiday season.  The best description would be: amazingly tender cinnamon nut swirl bread.  I would imagine that you could get very creative with the filling, maybe substituting with poppy seeds or by adding some chocolate chips or cranberries and it would be just as good.
There are four components to this bread.  First is the yeast.  You started by mixing together some warm water with a little sugar, yeast and flour. 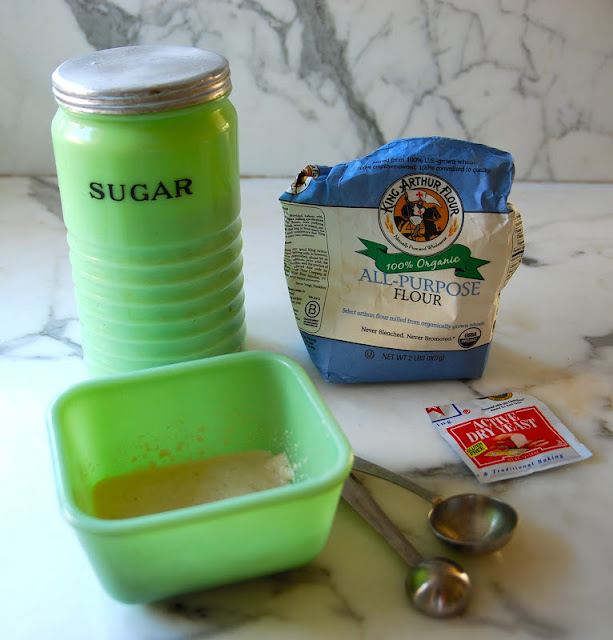 The second component is the dough:  To make the dough I heated some rice milk and then added some sugar, salt, egg substitute, melted butter substitute, the yeast mixture and two cups of flour.  I chose to use half unbleached white flour and half white whole wheat flour.  You knead this dough until it’s smooth and not sticky. 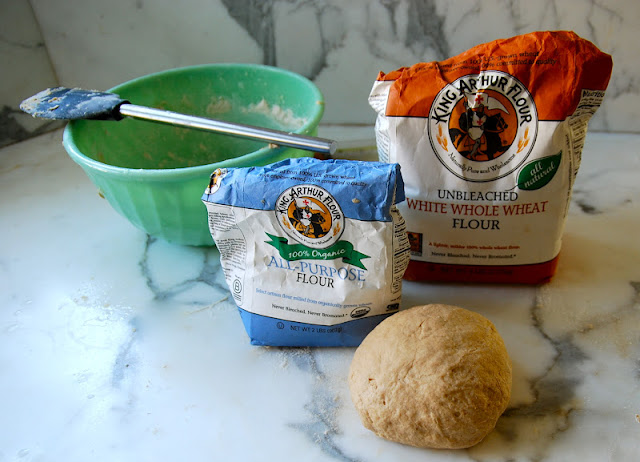 The third component is the filling: This is traditionally made of ground walnuts, cinnamon, cocoa, sugar, milk, butter, egg yolk and vanilla.  I substituted pecans for the walnuts because I’m allergic to them.  Also, it seems that “someone” had been snacking on my pecans so I was short the required amount.  I added some chopped raisins to make up for the shortage.  I replaced the egg yolk with some Bob’s egg substitute but I mixed it one to one with water instead of one to three.  I also used Earth Balance butter substitute to replace the real thing. 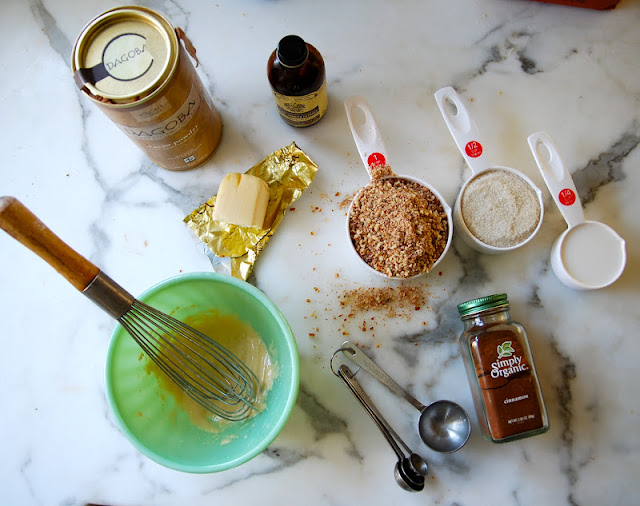 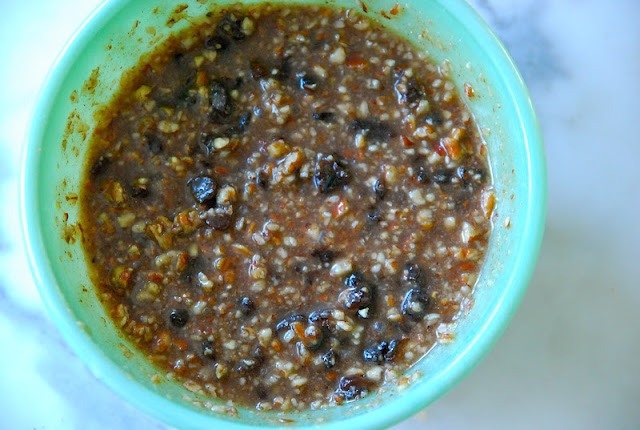 After the dough has risen, you roll it out on a sheet to prevent it from sticking and stretch it until it’s very very thin.  Then you spread the filling over it before you roll it up. 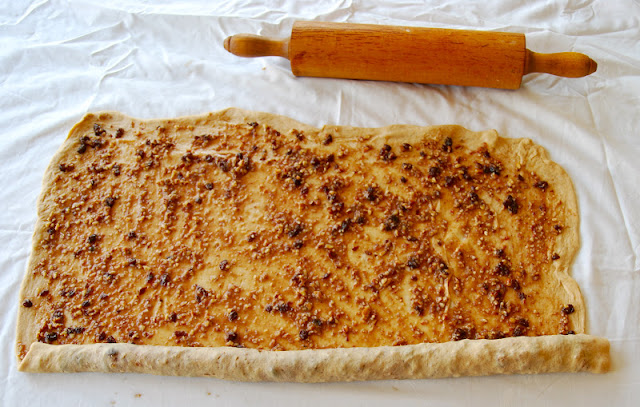 The dough is then looped in the pan. 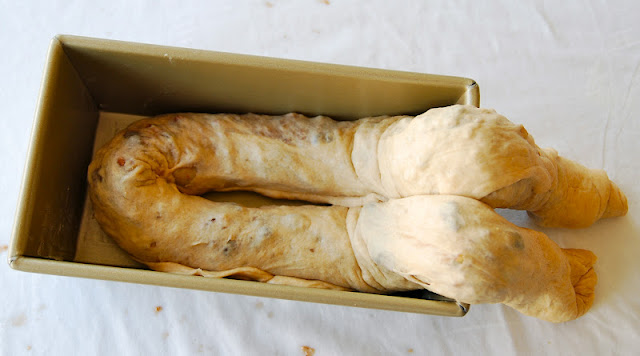 and then folded over on itself.  The last component is a coffee/sugar wash for the top. 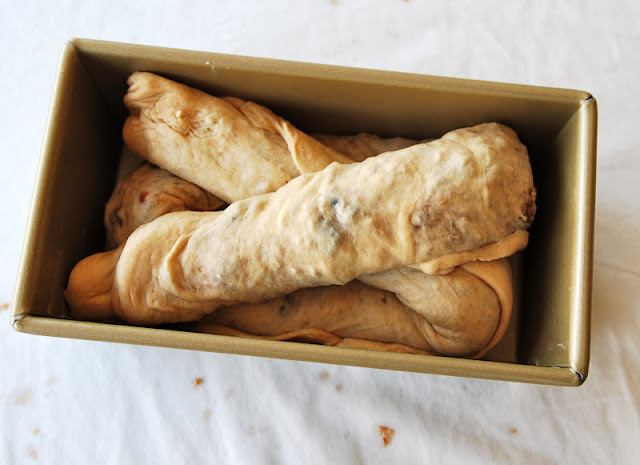 It’s important to let this bread cool completely before you cut it.  It’s hard to wait because it smells so wonderful. 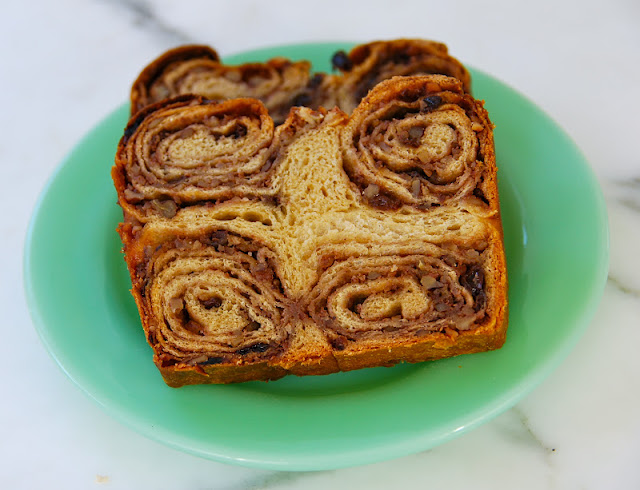 Vegan Povitica
Makes 1 Loaf - Use organic ingredients whenever possible
To activate the yeast:
1/2 teaspoon unbleached sugar
1/4 teaspoon unbleached white flour
2 tablespoons warm water
1 1/2 teaspoons active dry yeast
In a small bowl, stir the sugar, flour and yeast into the warm water and cover.
Allow to stand for 5 minutes or until it’s bubbly.
To make the dough:
1/2 cup rice milk or other non dairy milk
3 tablespoons unbleached sugar
3/4 teaspoons salt
1 tablespoon Earth Balance butter substitute, melted
1 tablespoon Bob’s egg substitute mixed with 3 tablespoons water
1 cup all purpose flour
1 cup white whole wheat flour
In a saucepan, heat the milk to just below boiling.
Pour it into a large bowl and allow it to cool to 110°
To the milk, add the sugar, salt and stir.
Add the whisked egg substitute, yeast mixture, and melted butter and stir.
Add the two cups of flour and stir slowly until the dough starts to clean the bowl.
Turn the dough out to a floured surface and knead, gradually add a little more flour if necessary.
The dough should be smooth and not stick.
Place the dough in a lightly oiled bowl and cover with a towel and let it rise for 1 1/2 hours or until it’s doubled in size.
For the filling:
1 3/4 cups ground pecans or walnuts
1/4 cup rice milk or other non dairy milk
4 tablespoons Earth Balance butter substitute
1/2 cup unbleached sugar
1 tablespoon Bob’s egg substitute mixed with 1 tablespoon water
14 teaspoon vanilla extract
1/4 teaspoon cocoa powder
1/4 teaspoon ground cinnamon
In a bowl, mix together the ground nuts, sugar, cinnamon and cocoa.
Heat the rice milk and butter until the butter is melted.
Pour the liquid over the nut mixture.
Add the egg substitute and vanilla and mix thoroughly.
Allow to stand at room temperature until you’re ready to spread it on the dough.
For the topping:
1 tablespoon cold strong coffee
1 1/2 teaspoon unbleached sugar
Melted butter
To Roll and Assemble the Dough:
Spread a clean sheet over a table.
Sprinkle it with a couple of tablespoons of unbleached flour.
Place the dough on the sheet and roll the dough out with a rolling pin, starting in the middle and working your way out until it roughly measures 12”x12”.
Gently brush 2 teaspoons of melted butter over the dough.
Using the tops of your hands, stretch the dough out from the center until the dough is thin and uniform
As you work, continually pick up the dough from the table to help stretch it and make sure it doesn’t stick.  It should be very thin and opaque.
Very gently spread the filling over the dough.
Starting with the long end, start rolling the dough.
Once the dough is rolled up, lift it into a greased bread pan in the shape of a u.
Coil the ends over the rest of the dough.
Brush the loaf with the coffee sugar mixture.
Cover the pan and let the bread rest for 15 minutes.
Preheat your oven to 350°
Remove the cover from the pan and bake the bread for 15 minutes.
Turn the oven temperature down to 300° and bake for an additional 45 minutes.
Check the bread at 30 minutes to ensure that it’s not getting to brown.  You may need to loosely cover it with aluminum foil if it is.
Remove the bread from the oven and let it cool for 30 minutes in the pan.
Remove it from the pan and let it cool for another 30 minutes.
Use a serrated knife to cut the bread, which may be easier to cut if the loaf is upside down.

Posted by My Recession Kitchen at 9:34 PM