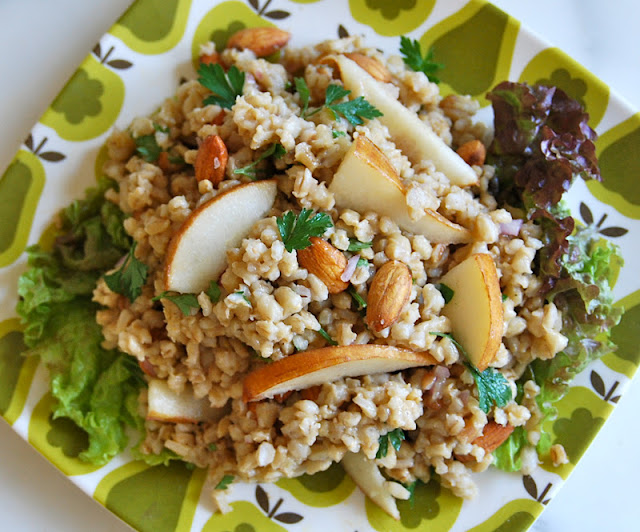 I realize that I haven’t posted any new recipes since the new year.  Like many Americans, I’ve simplified my diet by focusing on fruits, vegetables, bean and grains to try and shed the “holiday pounds”.  I’m avoiding sugar, flour and high fat foods and it’s working.   Eating green salads as a main meal in winter is difficult for me, I like to eat a warm dinners, so I came up with this combination warm and cold salad.
Barley is a cereal grain that hasn’t had much press lately compared to quinoa.  It comes from a type of wild grass that originated around present day Iraq, Syria and Lebanon.  It was one of the first domesticated grains and a staple of ancient Egypt.  Hulled barley, barley with the outer inedible hull removed, contains eight of the eleven essential amino acids.  Eating this whole grain can help regulate your blood sugar for up to 10 hours after consumption.  Hulled barley should not be confused with pearled barley which is further processed by steaming to remove the bran and then it’s polished.  You want to eat the whole grain version because the fiber and niacin helps maintain healthy cholesterol levels and feeds the friendly bacteria in your intestines. 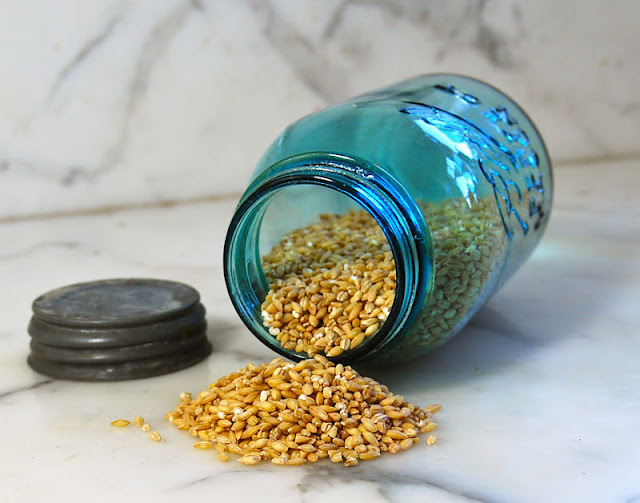 Cooked barley has a wonderful nutty flavor and chewy texture that can stand on it’s own.  It doesn’t need to only be used in soups and stews.  Cooked like rice it makes an excellent dinner grain topped with veggies and your favorite protein.  I’ve been cooking the barley and combining it with pears, almonds, shallots and parsley and eating it on a bed of lettuce. I love the combination of pears and almonds. 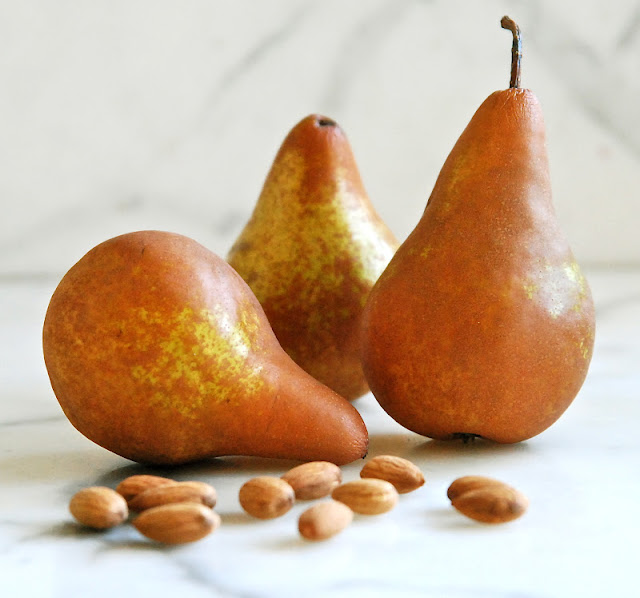 I’ve also made this salad with apples in place of pears and eaten it cold for the lunch.  It’s excellent both ways.  You can get creative and add cranberries or raisins or replace the almonds with walnuts or pecans.  The first time I made this, I used olive oil in the dressing but I’ve eliminated it.  Because I cook the barley in vegetable broth rather than water, I don’t think it needs any added oil or salt.
Barley is a wonderful hearty grain that deserves a try.
Pear Almond Barley Salad
3-4 Servings - Use organic ingredients whenever possible
1 cup hulled barley
3 cups vegetable broth
1 ripe pear (any variety or sub with an apple)
1/2 cup raw or roasted whole almonds (I used sprouted and dehydrated almonds)
1 tablespoon fresh lemon juice
1 tablespoon brown rice vinegar
1 tablespoon finely minced shallot
1/4 cup loosely packed chopped fresh parsley
Lettuce
raisins or cranberries optional additions
In a sauce pan, bring the barley and vegetable broth to a boil over a high heat.
Turn the heat down to low, cover the pot and cook for 30-35 minutes or until the broth is absorbed.
Take the top off the pot and let it cool for 10 minutes.
While the barley is cooking, mix together the lemon juice, vinegar and shallots in a small bowl
When the barley is done, cut the pear in small slices or cubes.
Mix the almonds and lemon juice mixture into the barley.
Add the pears and mix gently.
Serve immediately over a bed of lettuce.
Leftovers can be refrigerated and eaten the next day cold.

Posted by My Recession Kitchen at 5:32 PM