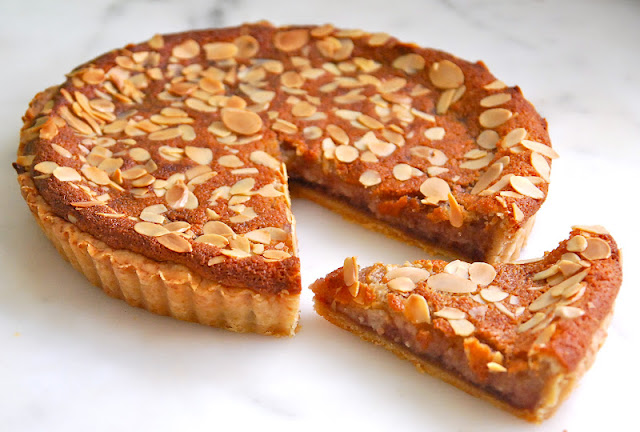 Almond tarts are also called Bakewell Tarts in England.  They’re a variation of the Bakewell Pudding which was first made by accident in 1820.  The cook at the White Horse Inn in Bakewell misunderstood the landlady’s instructions and a new dessert was born.  There are Italian and Swedish versions of the almond tart but I haven’t been able to determine if the British version came first.


Some time ago, I bookmarked a recipe from Williams-Sonoma for a raspberry almond tart that I thought looked delicious.  Of course, I couldn’t used the recipe as it was written because it contained eggs, milk and butter, none of which I can eat.  Milk and butter are easy for me to substitute.  For my crust I use a combination of Earth Balance butter substitute and Spectrum butter flavored palm shortening.  I find that this combination produces a flakier texture.
This recipe requires that you pre-bake the crust so you’re going to want to invest in some pie weights or you can use some dry beans.  Pie weights keep the dough from bubbling up as it bakes. 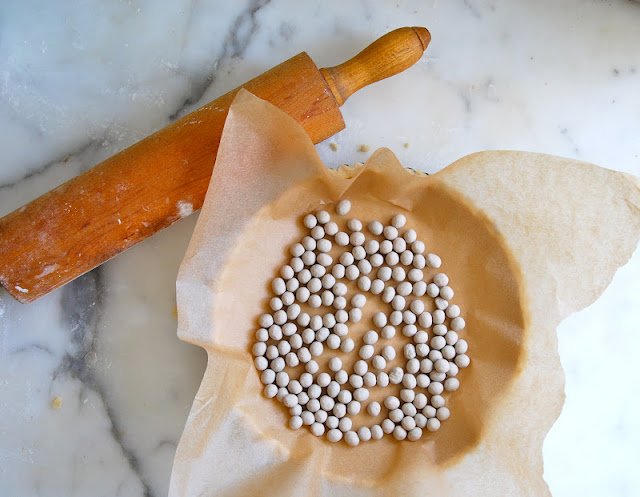 After you bake the crust and let it cool, you want to fill the bottom of the crust with a jar of jam.  I made this tart twice, once with apricot preserves and this time with raspberry.  Both were delicious.  Just make sure you spend a little extra and buy a good quality preserve and not a spread.  I went for price and didn’t notice that I had bought a spread.  You want one that is chunky and not strained.  I would imagine that you could also blend up some fresh fruit and spread that on the bottom of the crust. 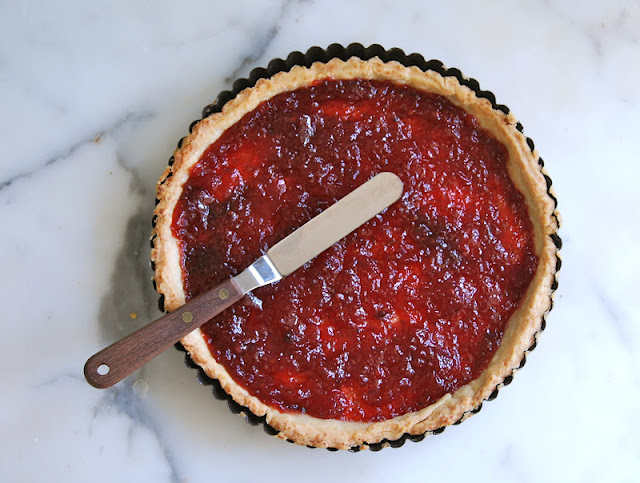 You might have noticed that the crust shrunk away from the tart pan.  I learned a trick that I will try next time, which is to let the dough rest for 5 minutes after you’ve rolled it out but before you put it in the pan.
I did include this step in the recipe below.
The next step is to make the frangipane filling.  This is traditionally made from whipping up butter, eggs almond paste, sugar and flour.  I replaced the butter with Earth Balance and the eggs with some almond milk and organic corn starch.  I’ve tried to make the filling gluten free by using almond flour instead of wheat flour but it comes out too wet.  Next, spread the filling on top of the fruit and sprinkle the top with sliced almonds. 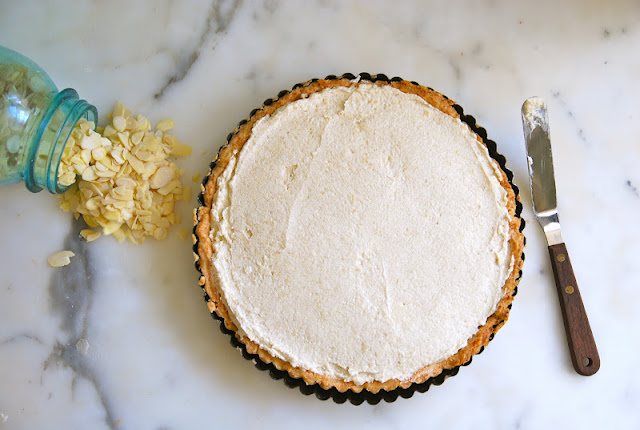 You need to bake the tart for about 40 - 45 minutes.  The center of the tart won’t be firm to the touch like you think it should be, but it will firm up as it cools off.  I’m sure the texture is more cake like with the eggs but I thought this was delicious.  Mr RK ate most of it and there wasn’t even any chocolate involved. 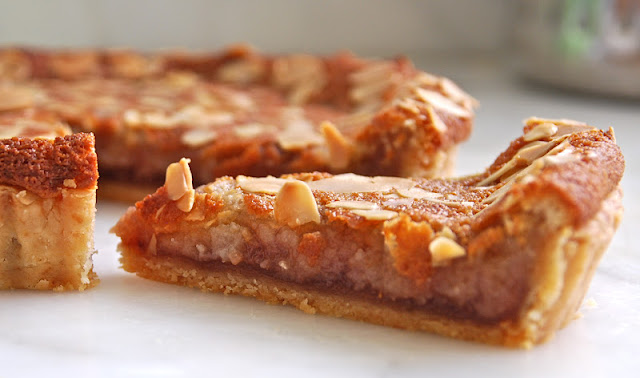 I’ve also made this tart in a rectangular pan and cut it into bars. 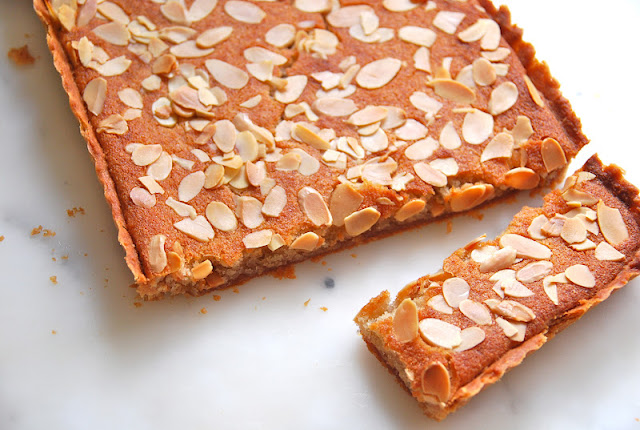 For the Crust:
6 tablespoons Earth Balance Butter Substitute
2 tablespoons Spectrum Butter Flavored Palm Shortening
1 1/4 cups unbleached white flour
1 tablespoon sugar
1/8 teaspoon salt
3-4 tablespoons ice water
Cut the Earth Balance into tablespoon sized pieces and measure out the palm shortening on a plate.
Put the fats into your freezer for 30 minutes.
Put the flour, sugar and salt into a food processor (or use a bowl and pastry cutter), pulse to combine.
Drop the fat, one tablespoon at a time, into the food processor and pulse until they’re pea sized.
Adding one tablespoon of water at a time, continue to pulse until the dough comes together.
Gently shape the dough into a round disk and put it on a lightly floured surface.
Roll the dough out to be an inch or two larger than your tart pan.
Let it rest 5 minutes.
Put the dough into your tart pan (it helps to roll it over your rolling pin to lift it) and press it into the form.
You can let the top of the dough extend slightly above the rim of the pan, it will shrink back as it bakes.
Refrigerate the tart dough for 30 minutes.
Position an oven shelf to the lower third of your oven and then preheat your oven to 375°
Line the pastry shell with parchment paper and fill with pie weights.
Bake the shell for 20 minutes and check the dough to see if it’s still wet.
Continue to cook for 5-10 minutes more if necessary or until the crust is pale gold.
Remove from oven and remove the parchment and weights and allow it to cool on a rack.
Position a oven rack to the middle of the oven and turn the temperature down to 350°
For the Filling:
1/2 cup apricot or raspberry preserves
1 stick (8 tablespoons) Earth Balance Butter Substitute at room temperature
1 7 oz package almond paste
1/2 cup sugar
1/2 cup almond milk
1/2 teaspoon vanilla extract
2 tablespoons organic corn starch
1/3 cup unbleached white flour
1/3 cup sliced almonds
In a stand mixer on medium speed, (or a bowl with a hand mixer) beat the butter until smooth.
Add the almond paste one tablespoon or so at a time beating until smooth.
Continue to beat as your slowly pour in the sugar.
Mix the vanilla into the almond milk and slowly pour into batter, beat until smooth
Turn off the mixer.
Combine the flour and corn starch.
Stir them into the batter.
Spread the preserves evenly over the bottom of the baked pastry shell.
Spread the almond batter over the preserves.
Sprinkle the sliced almonds evenly over the top of the batter.
Bake for 40 minutes.
Remove from over and let cool on a rack and let cool completely before serving.

Posted by My Recession Kitchen at 9:45 PM