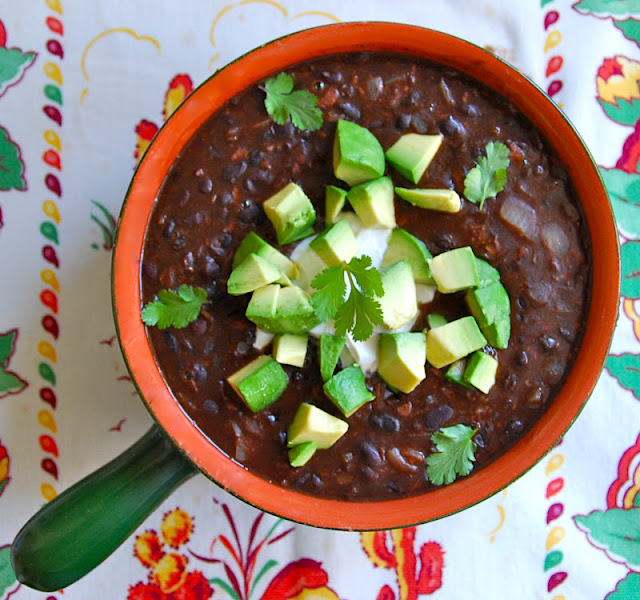 We could eat Mexican food every night of the week.  We love it that much.  When a friend of mine, who lives in Mexico, linked this recipe on her Facebook page, I knew I needed to give it a try.  I wasn’t disappointed!  The original recipe can be found on the website, What’s Cooking, Mexico?
This soup is balanced perfectly, much better than my other black bean soup recipe.  It’s just spicy enough to warm you up on a rainy night but not so hot that it masks the flavor of everything else.  I topped it with some non dairy sour cream, avocado and cilantro, and we both had seconds.

The original recipe calls for real chorizo, which is a spicy sausage made from the salivary glands, lymph nodes and fat of an animal.  I used Soyriso by El Burrito, which is is a meatless chorizo made from soybeans, so it doesn’t contain any animal parts, cholesterol or nitrites.  Unlike real chorizo, it’s not raw either so it cooks up very quickly.  This is the ingredient that sets this black bean soup apart from all the others that I’ve tired. 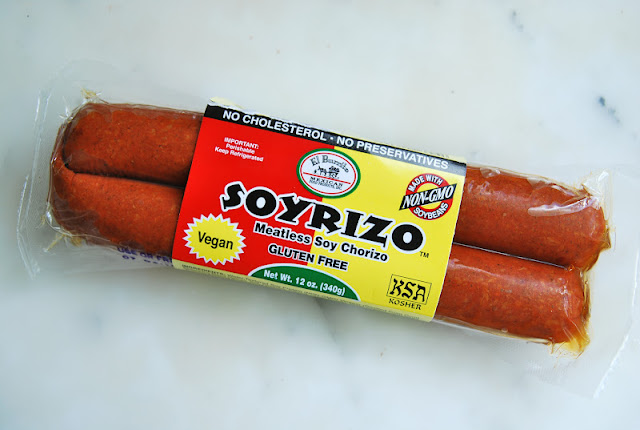 The recipe also calls for epazote, an herb traditionally used in Mexico when cooking beans because it tends to counter their gassy nature.  I couldn’t find any at the store so I substituted with some fresh cilantro.  It’s not at all the same flavor but it worked.  I’ve ordered some seed so I can grow epazote this summer.
Unlike many soups, this one is quick to make so it’s perfect for a mid week meal when you may not have a lot of prep time to get dinner on the table.  I cooked the beans in a pressure cooker so it only took about 15 minutes but you could use canned beans and it would take even less time. 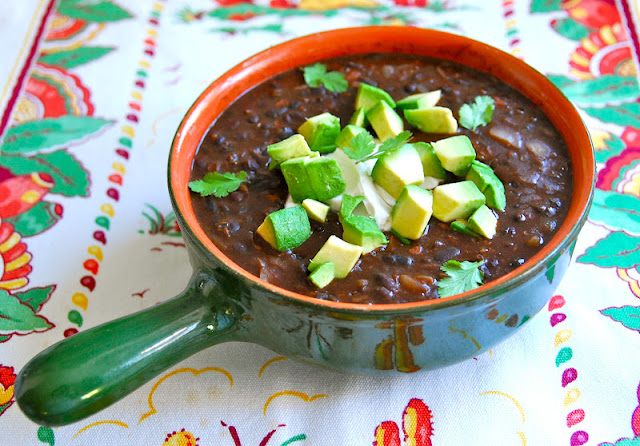 2 teaspoons sunflower or safflower oil
1 small onion
2 cloves garlic
6 oz El Burrito Soyrizo (half a package)
4 cups cooked black beans (or two 15 oz cans)
3 cups broth that the beans cooked in (or use vegetable broth)
1 teaspoon chopped fresh epazote (or 1/4 cup fresh cilantro leaves)
1/2 teaspoon ground cumin
1 teaspoon oregano
1/4 teaspoon salt
For garnish:
non dairy sour cream
avocado
cilantro
Warm the oil in a large soup pot over a medium low heat.
Chop the onion into very small pieces and mince the garlic.
Cook the onion and garlic in the oil until they are soft, stirring often, for about five minutes.
Remove the casing from the chorizo.
Add it to the onions and garlic breaking it up with a spoon and stirring, cook for five minutes.
Add the black beans and the broth to the pot and stir.
Bring this to a boil and reduce the heat to low.
Add the epazote or cilantro, cumin, oregano and and salt, give it a stir.
Cover and simmer for 10 minutes.
Serve it garnished with sour cream, avocado and cilantro.

Posted by My Recession Kitchen at 11:19 AM