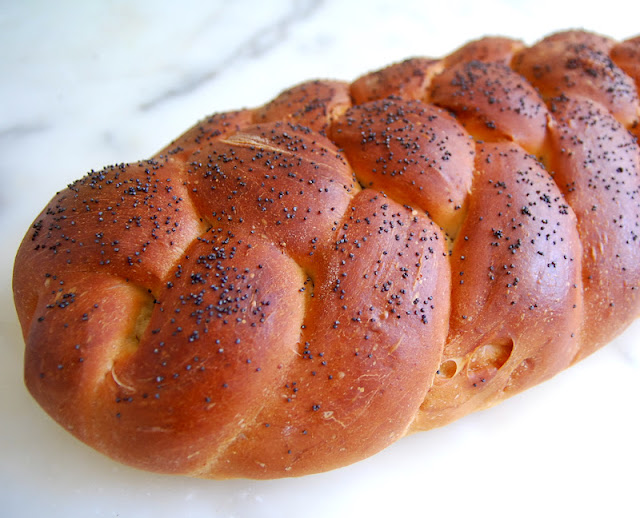 May’s Daring Bakers’ Challenge was pretty twisted - Ruth from The Crafts of Mommyhood challenged us to make challah!  Using recipes from all over, and tips from “A Taste of Challah,” by Tamar Ansh, she encouraged us to bake beautifully braided breads.

Challah is a bread of celebration in the Jewish tradition, eaten on the Sabbath and holidays because white flour was considered a luxury and therefore reserved for special occasions.  Traditionally, two loaves are baked commemorating the two portions of manna given to the Israelites during their Exodus from Egypt.  Sometimes, the loaves are braided with three, four or six strands of dough.  Three stand loaves symbolize truth, peace and justice. Two loaves with six strands each are meant to represent the 12 tribes of Israel.
Challah is traditionally dairy free but made with several eggs so I haven’t been able to eat it since I was a teen because of my allergy to eggs.  I do have fond memories of this golden tender bread and was happy to see that it was the May challenge.
I used an egg free recipe I found on a website that I read regularly called Vegan Dad.  Because his pictures were so beautiful, and because his adaptation was based on a Peter Reinhart recipe, I didn’t feel the need to try to develop a recipe of my own.  The eggs in the challah are replaced with a combination of ground flax seeds, water, vegan cream cheese and a few pinches of turmeric for color.  I felt that the finished bread was a little flat tasting so I’ve increased the salt to the amount in Peter’s version.
The nice thing about this recipe is that you can make the dough the night before you want to bake it and let it proof in your refrigerator overnight. 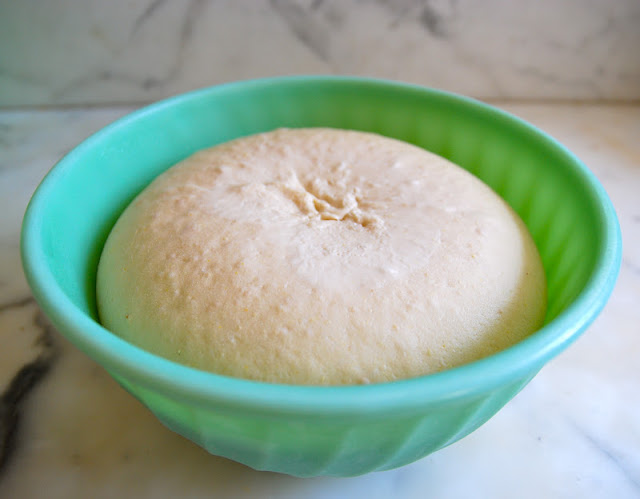 After proofing, knead the dough for 2 minutes to de-gas it and cut it into 6 pieces. 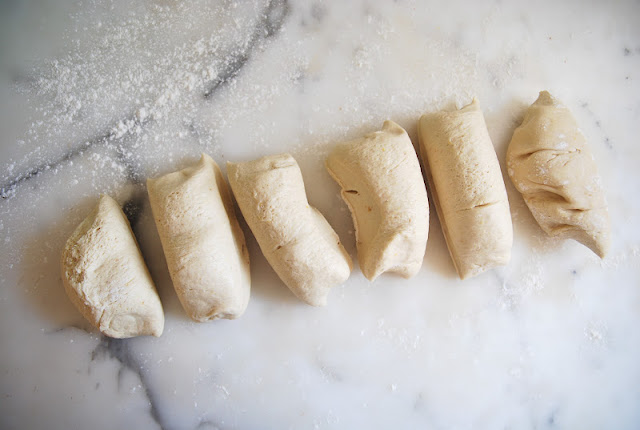 Roll out each piece to a 14” strand that is fatter in the middle and tapered at the ends.  I didn’t taper these enough which is why I think my loaf was flatter than I wanted it to be.  Another option, that I might try next time, is to roll each piece out into a disc with a rolling pin and then roll the disc into a strand.  This method is supposed to result in a better rise. 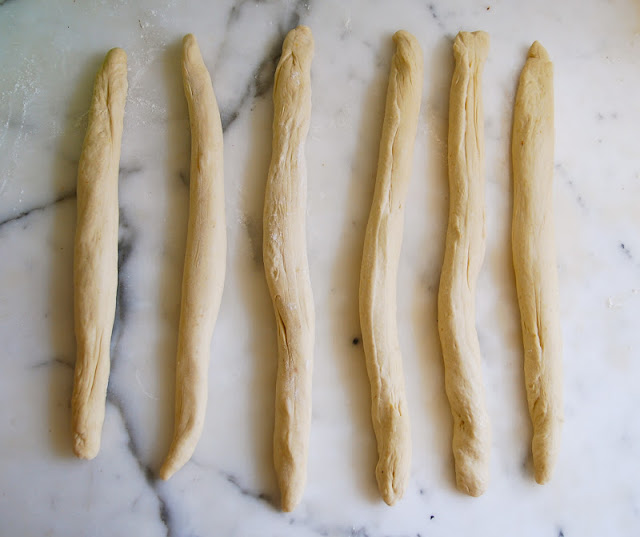 There are many videos on the internet showing you how to braid challahs using three, four, five or six strands.  I used a 6 strand one provided by the Daring Bakers but next time, I’ll follow this one instead for a more foot ball shaped loaf:
http://www.finecooking.com/videos/braiding-challah.aspx 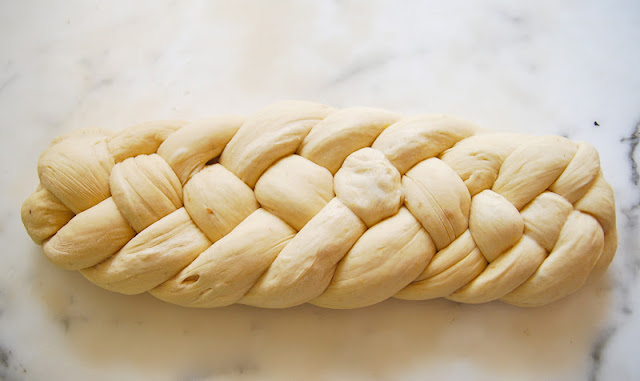 Tuck under the ends and let the dough rise for 1 hour more before baking. 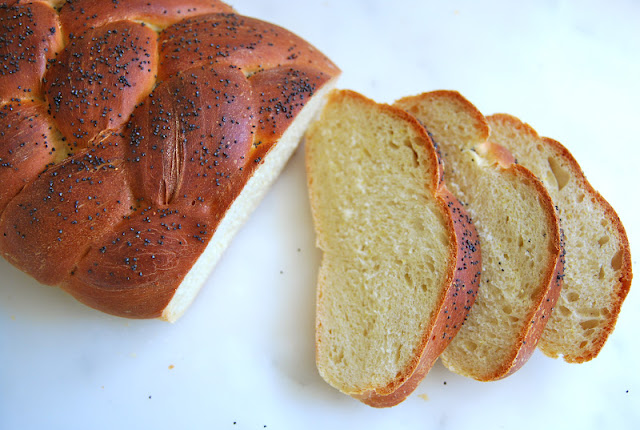 1 tablespoon ground flax seeds
2 tablespoons warm water
2 pinches turmeric
1/4 cup vegan cream cheese (Tofutti)
2 tablespoons sunflower or safflower oil
9 oz lukewarm water (100°)
2 packages yeast
1/4 teaspoon unbleached sugar
2 tablespoons unbleached sugar
2 teaspoons salt
3 3/4 cups unbleached white flour
soy creamer for brushing the top
poppy or sesame seeds for garnish
oil for greasing the bowl
Whisk the flax seed, turmeric and water together and let it sit for a few minutes.
Whisk the oil into the flax mixture and then the vegan cream cheese and set aside.
Pour the water into a mixing bowl or the bowl of your stand mixer.
Sprinkle the 1/4 teaspoon of sugar and yeast over the water and stir to dissolve.
Let the yeast rest for 5 minutes until it bubbles.
Add the flax mixture to the yeast mixture.
Add the sugar, salt and flour and stir to form a rough dough.
Using a dough hook in your stand mixture, mix on medium low for 6 minutes
(or knead by hand for 10 minutes)
Oil a large bowl and transfer the dough to the bowl and cover with a towel or plastic wrap.
You can put the dough in the refrigerator overnight at this point and skip the two rises or:
Let the dough rest for 1 hour.
Remove the dough from the bowl and knead for two minutes to degas.
Put the dough back in the bowl, cover it and let it rest for 1 more hour.
Remove the dough from the bowl and divide it into six equal pieces.
Roll each piece into a 14” strand that is thicker in the middle and tapered on the ends.
Braid the strands as tightly as you can.
Tuck under the ends.
Line a baking sheet with parchment paper.
Transfer the braid onto the parchment paper.
Brush or spray the top of the braid with soy creamer.
Let sit for 2 minutes and brush or spray again.
Sprinkle the top with the poppy or sesame seeds, or some of both.
Let the braid rest for one more hour.
Preheat your oven to 350°
Bake the bread for 20 minutes in the center of your oven.
Turn the bread around 180° and bake for 20 minutes more.
Allow the bread to cool for at least an hour before slicing.

Posted by My Recession Kitchen at 12:15 PM