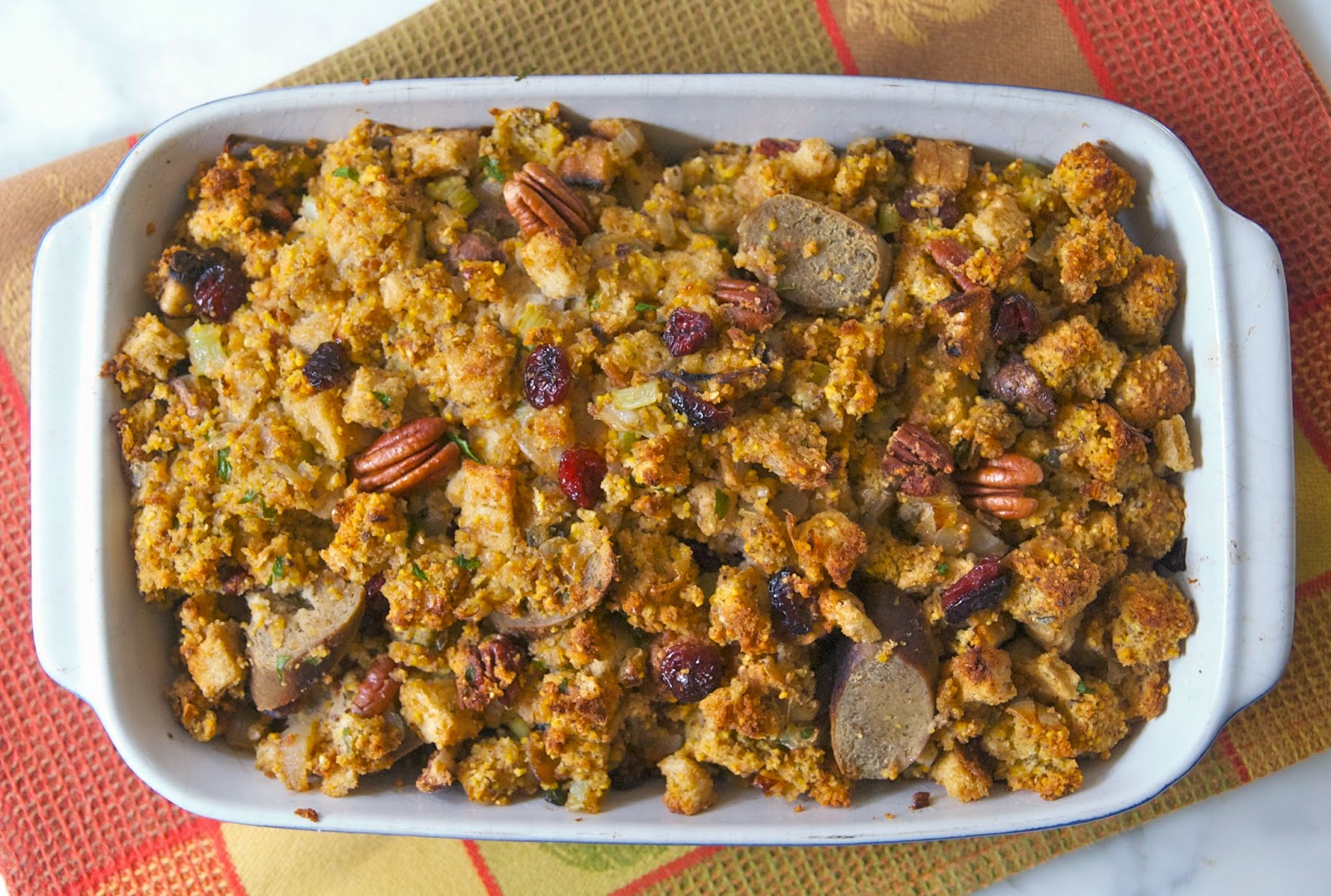 This year, for Thanksgiving, we're having my Cranberry Pecan Cornbread Stuffing as our main dish. I've added soy "sausages" for protein so it's more of a stuffing casserole.

"No turkeys will be harmed in the making of this dinner",
so if you've got family members coming for Thanksgiving that don't eat turkey, this is what you can make for them.


I make the cornbread a day or two ahead, so it has time to dry out.  Instead of cooking the cornbread in an 8x8 pan, I bake it in a 9x14 pan for two reasons; first, it cooks faster and secondly, it's very easy to cut into cubes for toasting. 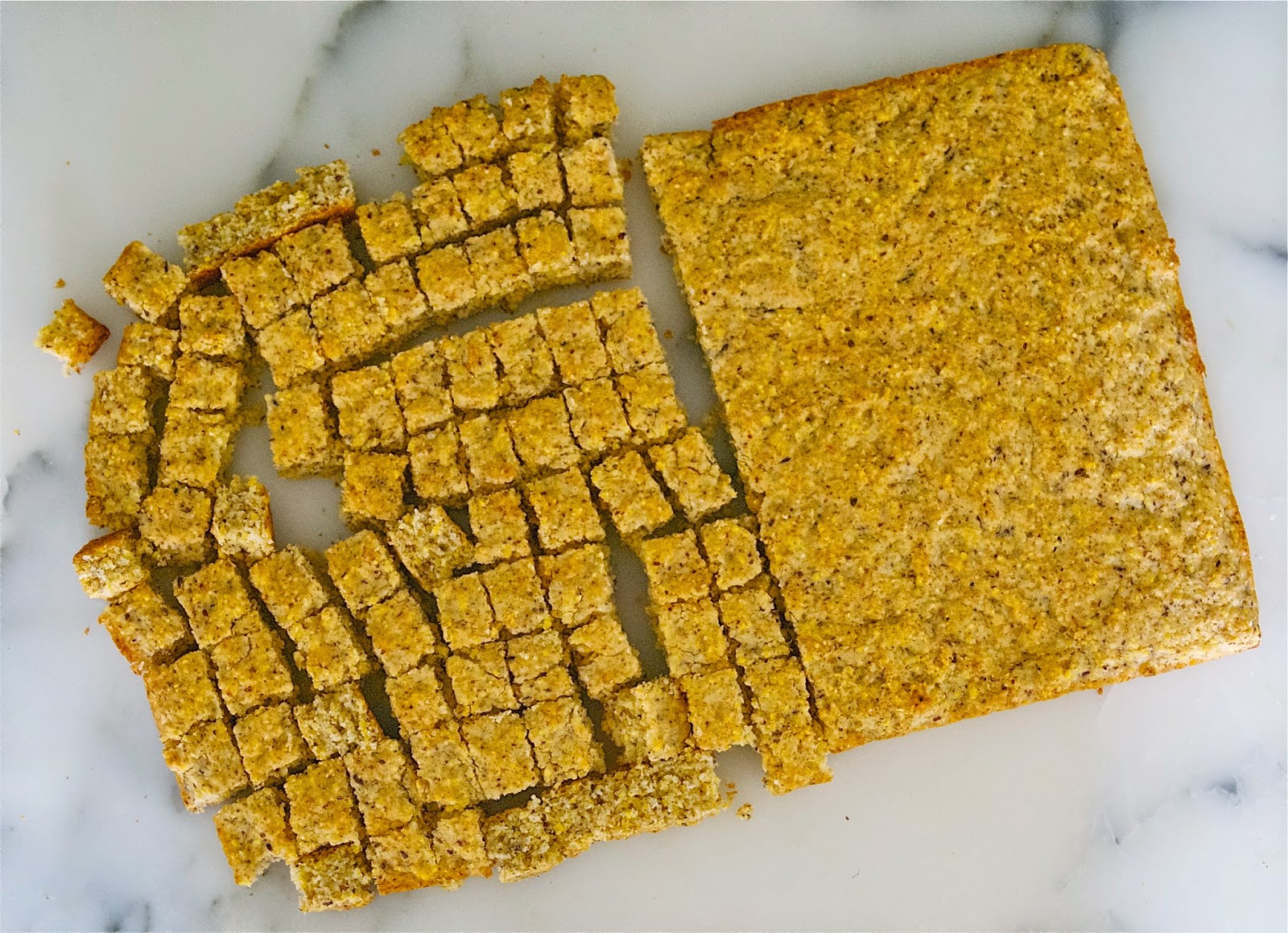 I use Dana Sly's Award winning vegan cornbread recipe.  It's excellent, so why reinvent the wheel. It could easily be gluten free by replacing the cup of wheat flour with a cup of your favorite gluten free flour blend. When the cornbread cools, cut it into crouton sized cubes and then toast them on a cookie sheet in a 300˚ oven until they are dry.  This should make about 5 cups of cornbread croutons.

I also used 2 cups of bread croutons in this recipe.  Feel free to use white bread or whole wheat, or a combination of both. You can also use your favorite gluten free bread. Toast the bread in a toaster and cut the slices into crouton sized pieces. After they've cooled, mix both the bread and cornbread croutons in a large bowl set aside.  No need to cover them.

On Thanksgiving morning, you can start the stuffing by trimming and slicing some mushrooms.  I like to cook them over a medium heat so they get nice and browned. 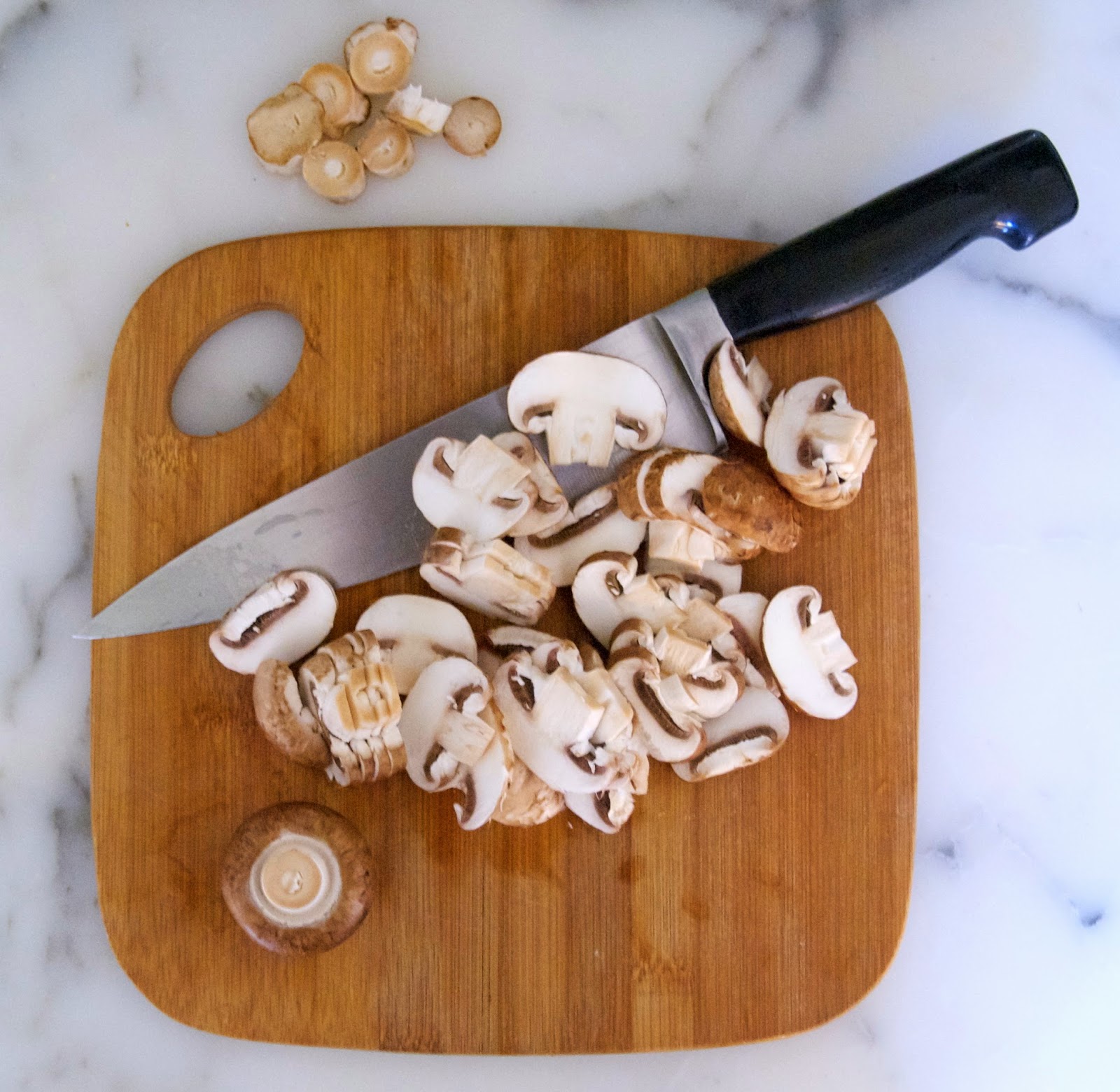 Then, I saute the onions, celery and garlic.  When they are golden brown, I add them to bread mixture and stir. 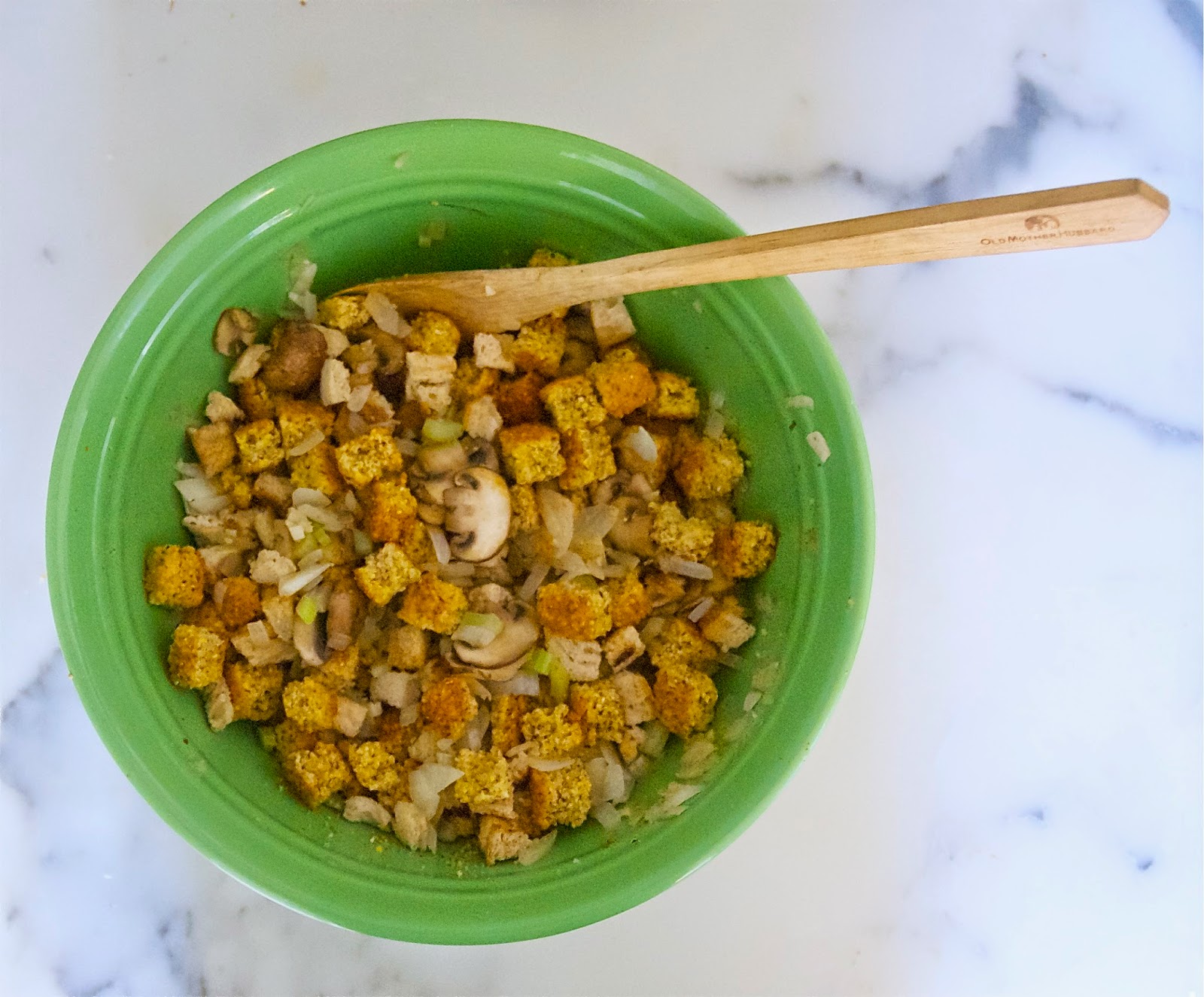 At this point, you can get creative.  I used cranberries and pecans but you could substitute walnuts and raisins if you wanted.  You could even add some diced apple or dried apricots. 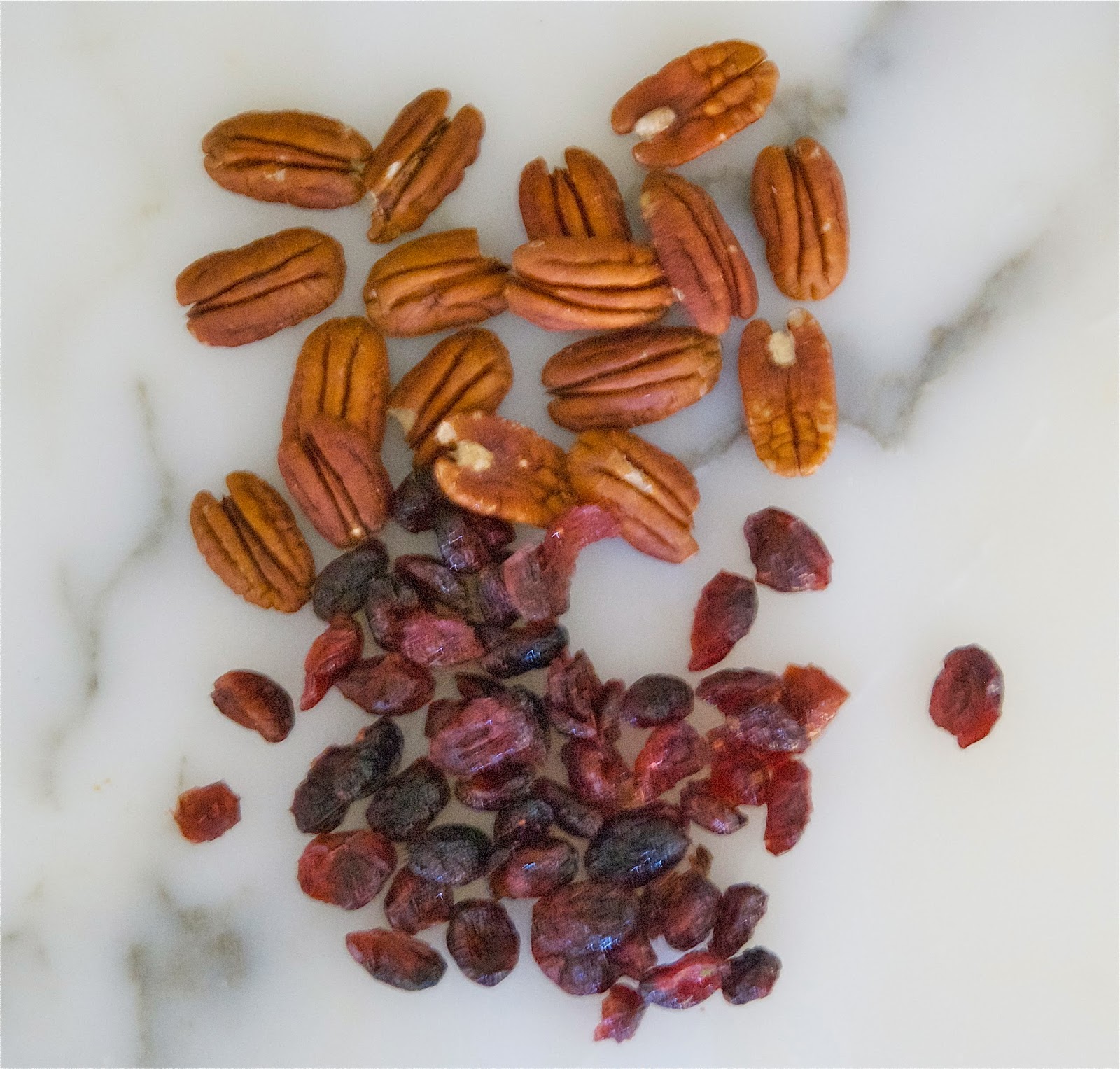 I like to use fresh herbs whenever possible, so I grow parsley and sage in pots on my patio.  If I lived in a colder climate, I would grow them on a window sill inside.  Herbs are very easy to grow.  If you don't have access to fresh herbs and need to used dried ones, increase the amounts I call for.  Dried herbs are not as strong tasting. 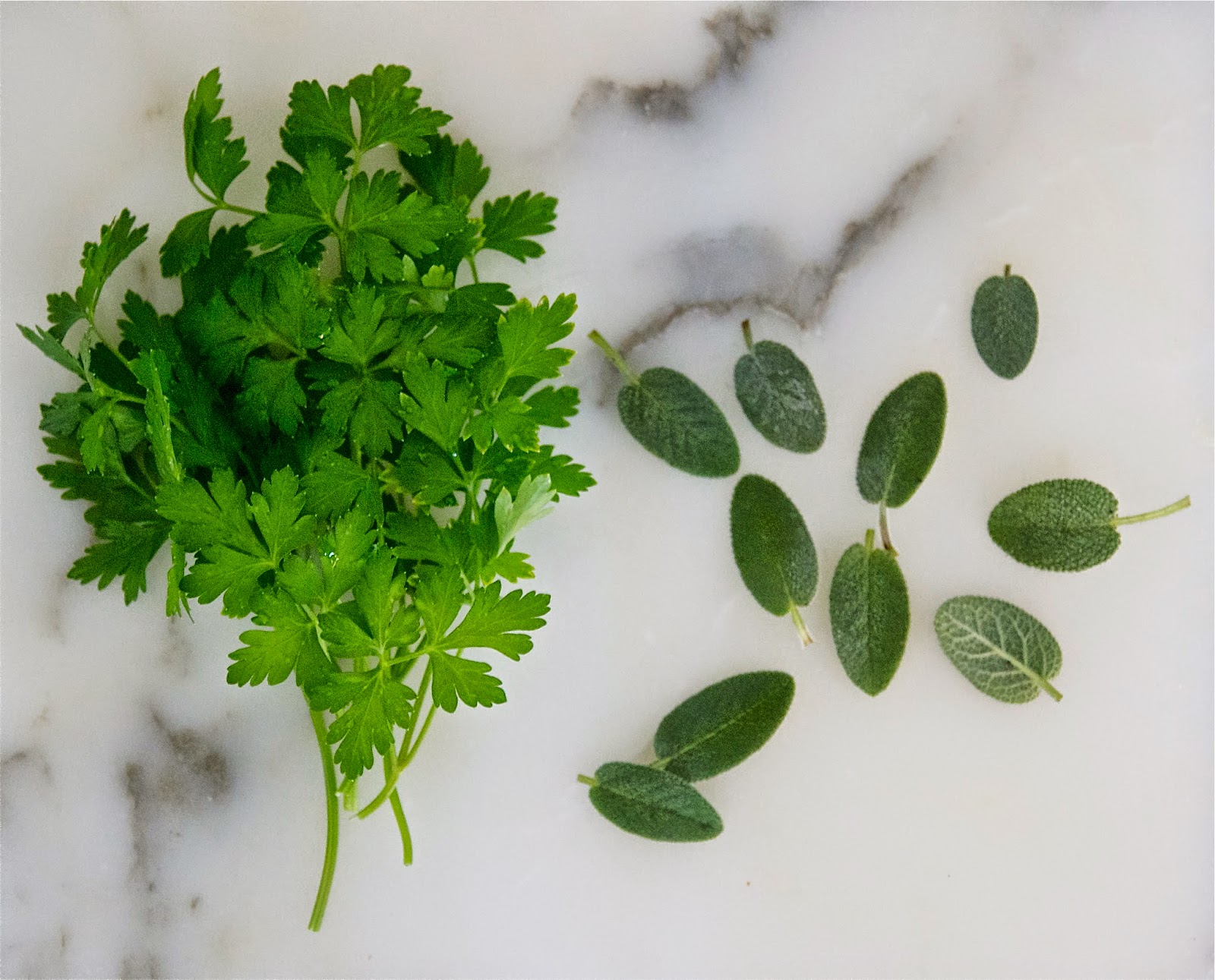 I add the herbs and some white wine to 2 cups of warm broth and pour the broth over the bread cubes, stirring gently to dampen everything.  Set it aside so it can absorb the broth while you cook the "sausage". 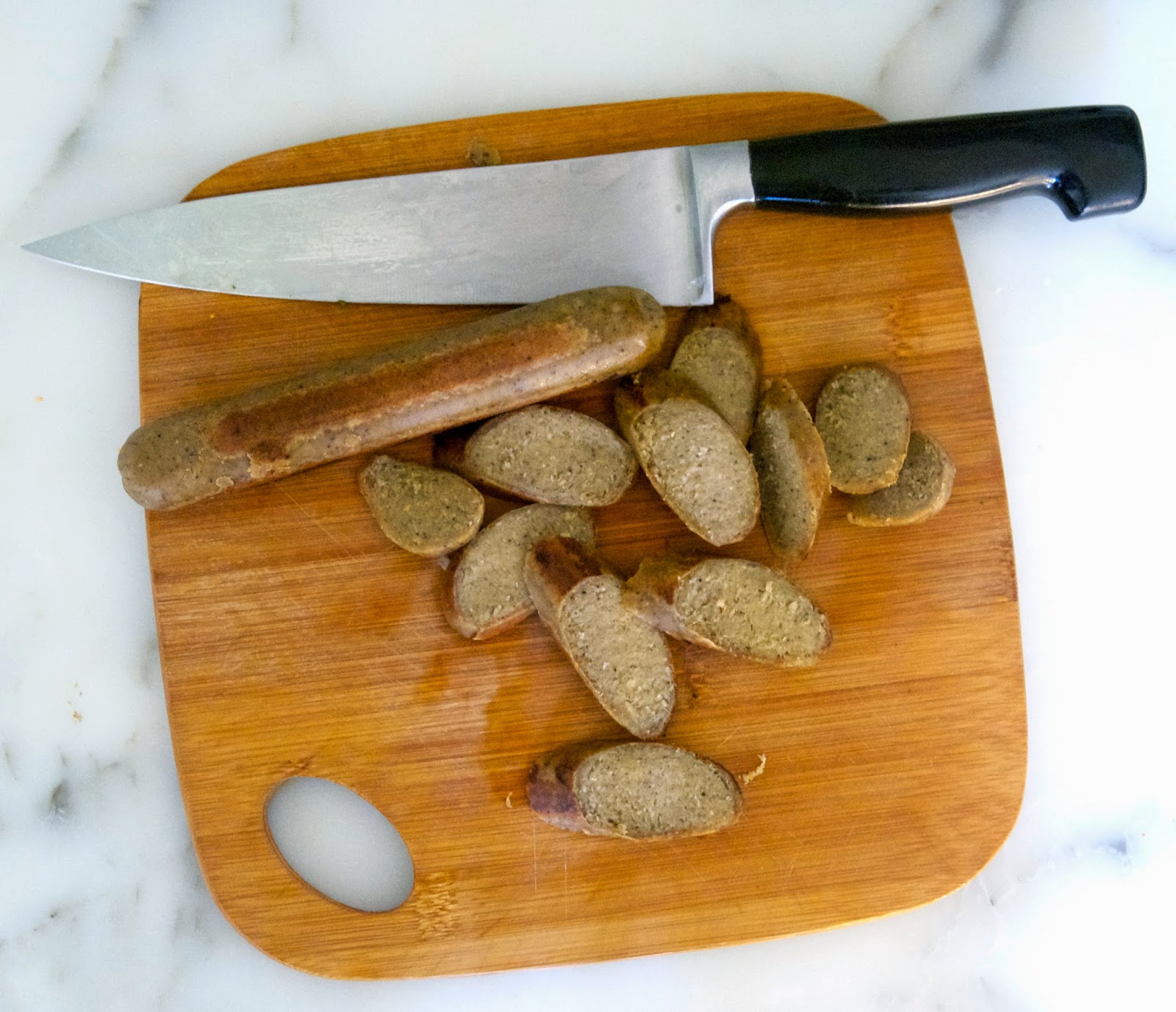 I browned 2 Tofurkey Beer Brats but I would also recommend Field Roast apple sage sausages.  If you're using those, you may want to use 3 since they're smaller.  I like to cut them diagonally.  Add the sausage to the rest of the ingredients and stir gently.  Put the stuffing in an oiled 8x12 (approximately) sized baking dish and dot the top with some Earth Balance non-diary butter.  Bake for 40 minutes uncovered. 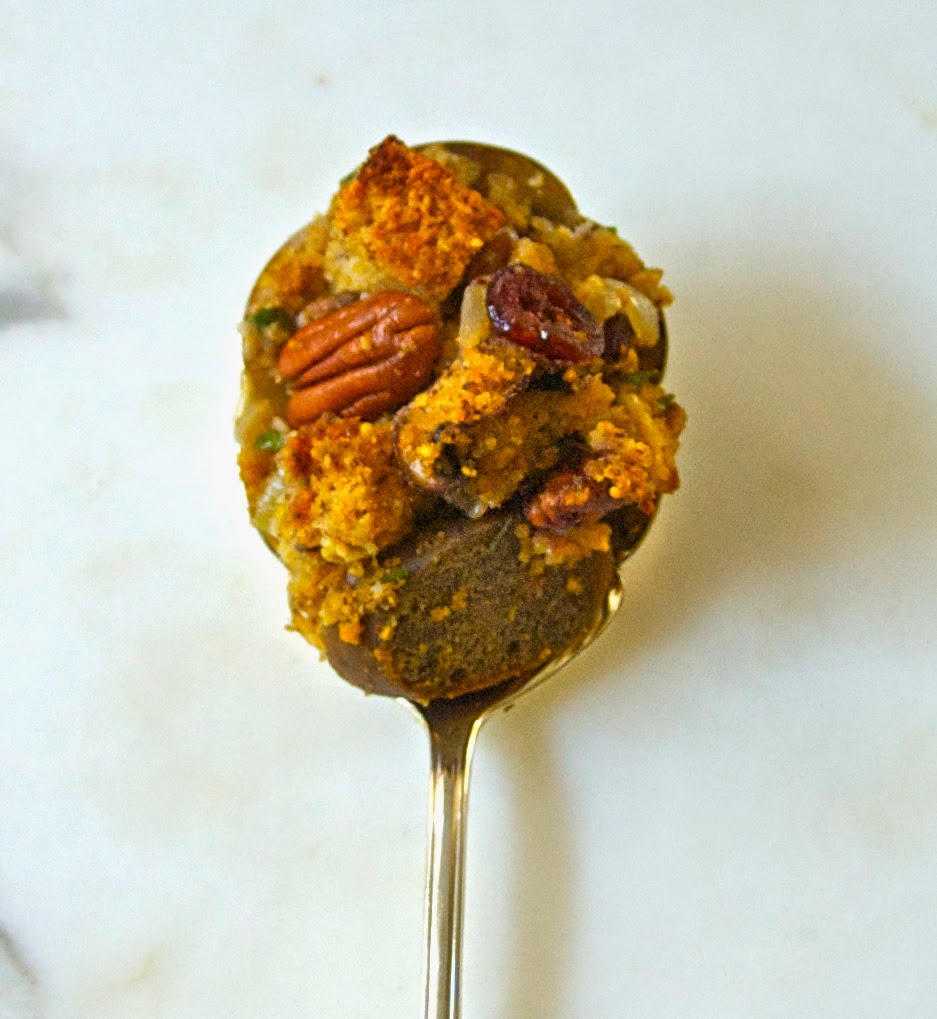 For the Cornbread:
1 batch of Dana Sly's Vegan Cornbread
(click on the underlined words for the recipe)
Follow the directions, except, cook it in a 9x13 pan and shorten the cooking time to 15 minutes.
Allow to cool for 20 minutes and remove from the pan.
Cut the cornbread into crouton sized cubes.
Spread them out on a cookie sheet.
Cook in the oven at 300˚ until toasty.
Allow to air cool.

Preheat your oven to 350˚
Mix the cubed bread and cornbread in a large bowl
Heat 1 tablespoon of the oil in a frying pan
Wash, trim and slice the mushrooms
Saute in the olive oil over a medium heat until browned
Remove from pan and set aside
Add the remaining oil to the pan
Cook the onion, celery and garlic over a med low heat until golden, about 5 minutes
Add the cooked onion mixture, the mushrooms, and the chopped herbs to the bread and stir gently.
Add the wine to the warm broth and pour over the bread mixture, stir gently and set aside
Brown the sausages and cut diagonally.
Add the sausages to the stuffing.
Oil a baking dish (approx. 8x12)
Put the stuffing in the dish and dot the top with the butter
Bake for 40 minutes, uncovered.

Posted by My Recession Kitchen at 4:33 PM