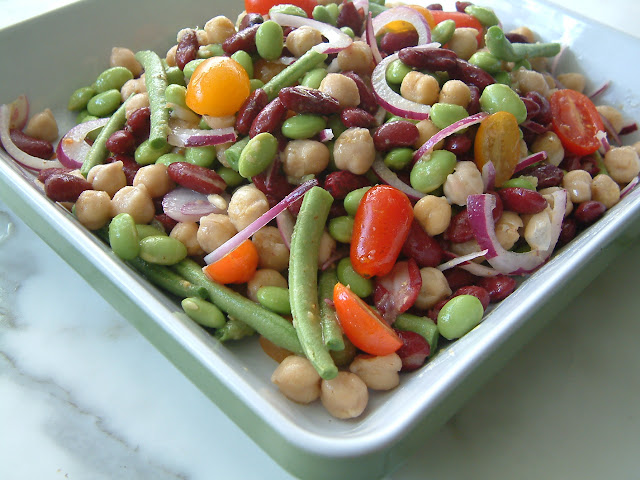 I harvested my first green beans of the summer a few days ago.  (click on “My Garden” at the top of the page for more information about growing green beans)  Because I only got a small handful of beans, not really enough to serve on their own, I went to the web in search of a bean salad recipe.  3 Bean salad is what first comes to mind, but I wanted to update it a little.  I had kidney and garbanzo beans on hand as well as some edamame, (green soybeans) so I turned it into a 4 bean salad.
Edamame is a good source of protein.  There are 8 grams of protein in a 1/2 cup of edamame vs about 2 to 4 grams per 1/2 cup of kidney or garbanzo beans.  A worthy addition to any salad.
I also added some cherry tomatoes to this salad, not traditional but very colorful and tasty.  Sometimes it’s good to break from tradition.   I whipped up a lemon mustard vinaigrette to flavor the whole thing.  You really should let this sit in the refrigerator for a few hours before serving.  It give the beans some time to soak up the vinaigrette and it gives the lemon juice some time to break down the raw green beans and onion.
A perfect salad/side dish for a hot summer night.  This serves four as a side dish, or two if it’s your main course.
4 Bean Salad
1 cup cooked garbanzo beans*
1 cup cooked kidney beans*
1 cup cooked organic edamame beans
1 cup raw green beans, trimmed and cut in half
1/2 red onion, sliced very thin
12 cherry tomatoes, cut in half
Lemon Mustard Vinaigrette
2 tablespoons extra virgin olive oil
1 tablespoon rice vinegar
2 tablespoons fresh lemon juice
2 tablespoons prepared mustard
1/4 teaspoon salt
Whisk all of the vinaigrette ingredients together and pour over the beans & vegetables.  Mix gently.  Refrigerate for at least an hour.
*I highly recommend that you cook the kidney and garbanzo beans yourself rather than using canned ones.  I use a pressure cooker and it only takes about 20 minutes to cook them without having to soak the beans first.  I cook up a big pot and freeze the extra in pint yogurt containers.
The issue I have with canned beans is that they line the cans with a plastic that contains Bisphenol A or BPA.  This is the chemical that’s been in the news a lot because it’s in the polycarbonate plastic used in baby bottles.  It’s used in cans to prevent the lead in the seams from getting into the food.  BPA has hormone disrupting effects in studies on animals and human cancer cells have been shown to occur at levels as low as 2-5 parts per billion.  Health problems include lowered sperm count and infertile sperm in men, and BPA has been proven to have carcinogenic effects and produce precursors of breast cancer.  The U.S. Centers for Disease Control and Prevention found BPA in the urine of over 95% of people they tested.  There are no government safety standards limiting the amount of BPA in canned food.
The only canned beans I know of that are not lined with a BPA plastic are Eden Brand.
Read more: http://www.thedailygreen.com/living-green/blogs/organic-parenting/4600#ixzz0JkvTpCK1&C
Posted by My Recession Kitchen at 7:57 PM

Email ThisBlogThis!Share to TwitterShare to FacebookShare to Pinterest
Labels: Salads