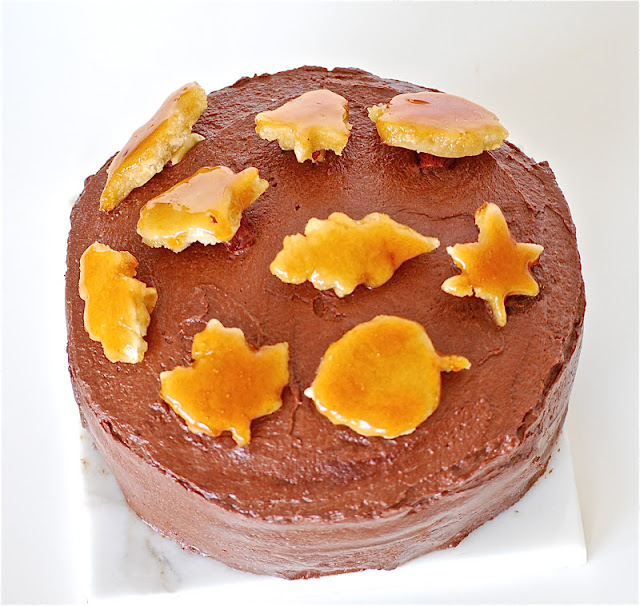 I joined an online baking group called the Daring Bakers.  Each month one of the members of the group chooses a challenging recipe and everyone bakes it and then posts their finished product on their blog.

The August 2009 Daring Bakers' Challenge was hosted by Angela of A Spoonful of Sugar and Lorraine of Not Quite Nigella.  They chose the spectacular Dobos Torte based on a recipe from Rick Rodgers' cookbook Kaffeehaus: Exquisite Desserts from the Classic Caffes of Vienna, Budapest, and Prague.


I was intrigued by this choice because it was an old recipe with Hungarian roots.  (my paternal grandparents came from Hungary)  This recipe was certainly a challenge for me on many levels.  First, because I've never made anything like this and secondly, because of my food allergies.  I had to "veganize" the recipe due to my allergy to eggs and because I rarely eat dairy products due to my terrible family history of heart disease.

This torte has 3 parts: the five layer sponge cake, the buttercream frosting and the caramelized sponge top layer.

1. Replacing the eggs in the sponge layers.

The recipe didn’t prove to be as challenging as I thought it would be.  The original recipe called for 6 eggs.  I made a vegan sponge by replacing the eggs with a tablespoon of tapioca starch and increasing the flour.  I was very happy with the texture of the sponge. The challenge, in hindsight, was making the round layers as thick on their outer edges as the center.
2. Dealing with buttercream in 95˚ weather.
There are a number of wonderful vegan buttercream recipes on the web.  Basically, you leave out the eggs and replace the butter with Earth Balance buttery spread.  My error, considering the heat, was that I didn’t refrigerate the buttercream before trying to frost the cake.  This is what happened. 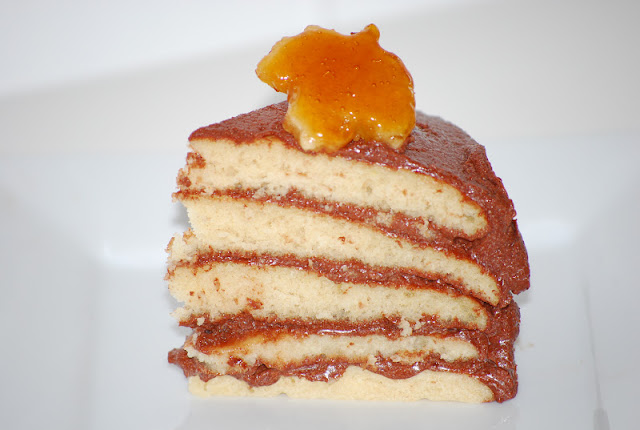 You can see that the center of the layers was thicker than the outside edges and the buttercream began to melt and run out and then the whole thing started to slide.  In hindsight, I should have made the sponge layers much larger than they needed to be and trimmed off the outer edges, and refrigerated the frosting.
2. Making the caramel leaves for the top

The top layer proved to be tricky as well.  I thought it would be nice to make caramel leaves instead of the traditional wedges.  Pouring hot caramel on wedges of sponge cake is probably difficult enough but trying to pour hot caramel on little leaves (and then get them out of the caramel) was close to insanity.

I’m not really proud of this cake, it’s was not pretty.  It tasted good, but very sweet, a little too sweet for me.  It was, however, a wonderful learning experience, which is what I signed up for.

Posted by My Recession Kitchen at 6:47 PM