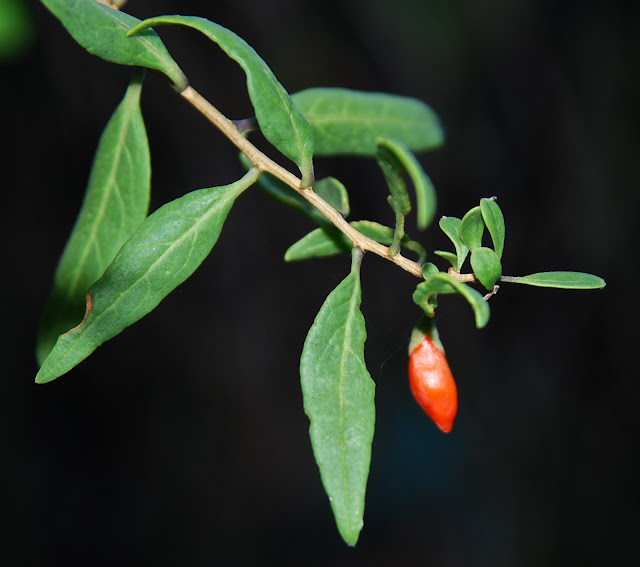 A few years ago I bought a goji berry plant.  I was researching goji berry suppliers on the internet for a raw food project my company was launching when I discovered the Timpanogos Nursery in Colorado was selling the plants.  Goji berries are incredible antioxidant fruits but they’re also very expensive so I ordered a plant.  I was also interested in trying them fresh.  The berries are very delicate and bruise easily which is why you usually find them dried.   According to the nursery, these are the true goji berry plants, not the wolfberry variety.  The true goji berry plants, known as Lycium barbarum, come from Tibet and Mongolia and the fruit is sweeter than the wolfberry.
Goji berries are native to Asia and have been used for over 6,000 years by herbalists China, Tibet and India as an anti-inflammatory to protect against diseases of the heart, liver, and eyes.  The leaves can be brewed as a tea to treat skin ailments.  The berries contain more vitamin C than oranges, more beta carotene than carrots and more iron than spinach, and are quite possibly the highest antioxidant food on the planet. They also contain vitamin E which is rarely found in fruit, and are 13% protein, including all 8 essential amino acids.
Goji berry plants are easy to grow in a wide range of climates.  They can survive winters down to -15˚ fahrenheit and summers above 100˚.  It’s a bushy evergreen that can grow to 10-12 feet tall in full sun and well drained soil.  The plants produce fruit the second year from small purple blossoms. 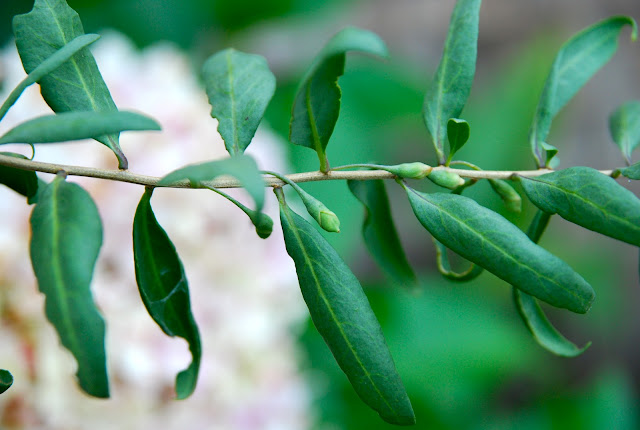 Goji berries are in the nightshade family, which I’m generally allergic too.  Fortunately, I can eat goji berries as well as tomatoes, just not any of the other foods in this family (potatoes, eggplant, bell peppers).  In China, the dried berries are most often eaten in soups or teas, and sometimes added to rice dishes. 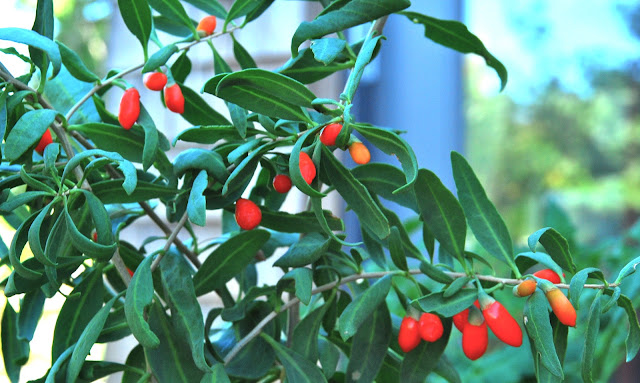 The fresh berries have a sort of sweet and sour flavor that’s hard to describe.  I ate them all fresh this year since there were only about 4 dozen little berries. The first year I only had two berries.   Next year, hopefully, my bush will produce enough berries that I can dry some as well.
If you’re interested in trying some dried goji berries and can’t find them in a local store, you can purchase them from Navitas Naturals.  They sell a powdered version that would be an excellent addition to smoothies.  I trust their quality, because you definitely want to buy organic goji berries.  If you want to try and grow a goji berry plant, you’ll want to contact the Timpanogos Nursery.  They will be taking pre-orders soon, for shipment in the spring.
Posted by My Recession Kitchen at 12:08 PM