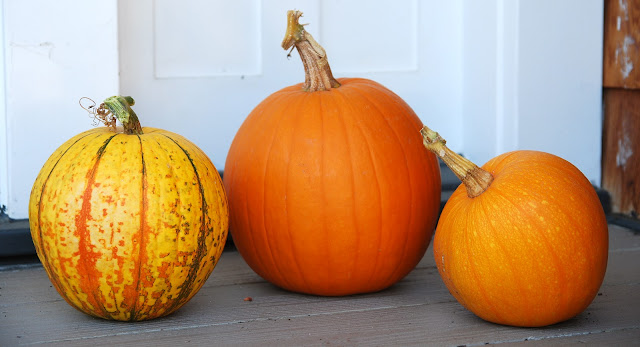 It’s October which means it’s time to harvest pumpkins.  This year we grew our pumpkins in a shared garden with our neighbors, I wrote about it on August 28.  I harvested four pumpkins today and three of these mutant delicata squash.
I’m not sure why the squash grew round like a pumpkin, but I have several theories.  My best guess is that the seed I used from a squash that I bought was a hybrid and it reverted back to whatever it was originally.  My second guess is that it cross pollinated with the pumpkins.  They’re a little stringy for eating (I baked one) but they’re very pretty.  I may have to turn it into a jack o lantern for Halloween!

Posted by My Recession Kitchen at 3:40 PM