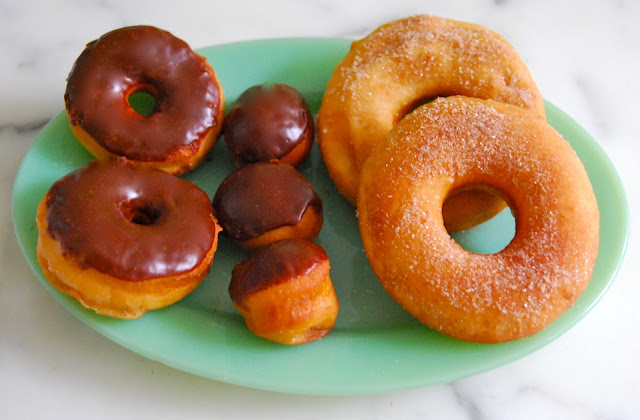 The October 2010 Daring Bakers Challenge was hosted by Lori of Butter Me Up.  Lori chose to challenge DBers to make doughnuts.  She used several sources for her recipes including Alton Brown, Nancy Silverton, Kate Neumann and Epicurious.
I’d never made doughnuts before and I have to say they were a lot easier to make than I thought they would be.  I used the Alton Brown yeast doughnut recipe.  That way I was sure to have light doughnuts without having to use eggs and they were perfect.  Since this was my first try at making doughnuts, I didn’t play around with fancy flavors.  Next time!
You don’t need a fancy doughnut cutter.  I used this metal ring and a coffee scoop with it’s handle removed to make the large doughnuts and I used a wide mouth canning lid ring and a apple corer to made the smaller doughnuts.  It’s amazing what you can find in your kitchen when you need to. 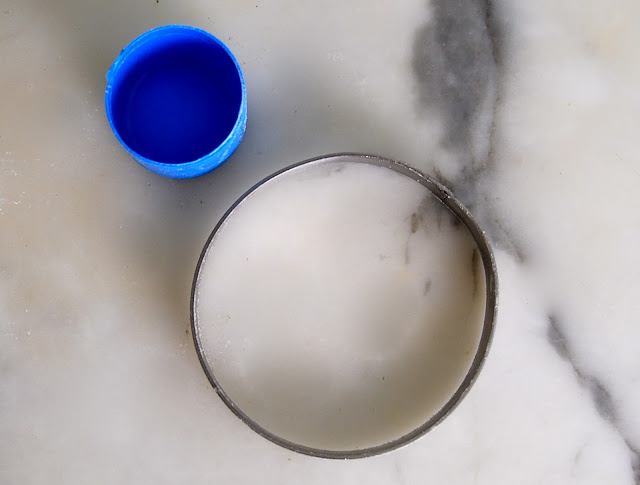 You also don’t need to have a fancy deep fryer machine, I used this pot.  What you do need is a good thermometer.  The most difficult part was keeping the temperature of the oil at 365°.  I had to cook a few doughnuts and then wait until the oil came back to the correct temperature before I fried the next batch.  I used a small pot so I wouldn’t have to spend a fortune on oil.  Doing it this way took longer but I was able to get by with using only one pint of oil. 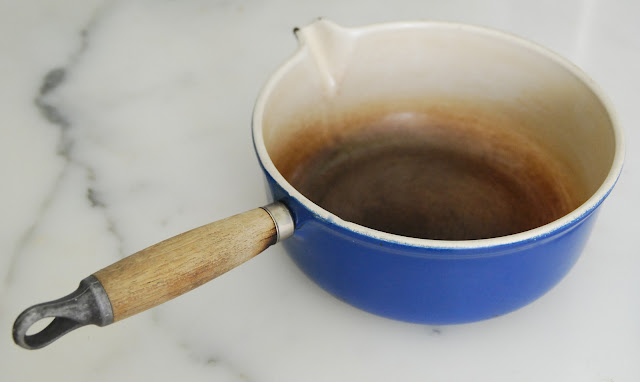 First I made some large doughnuts that I rolled in cinnamon vanilla sugar after they were done.  These were my favorite.
(I apologize for not having more pictures of the process but I accidentally left my camera on overnight and the battery was dead.  By the time it recharged, I was done making the doughnuts.) 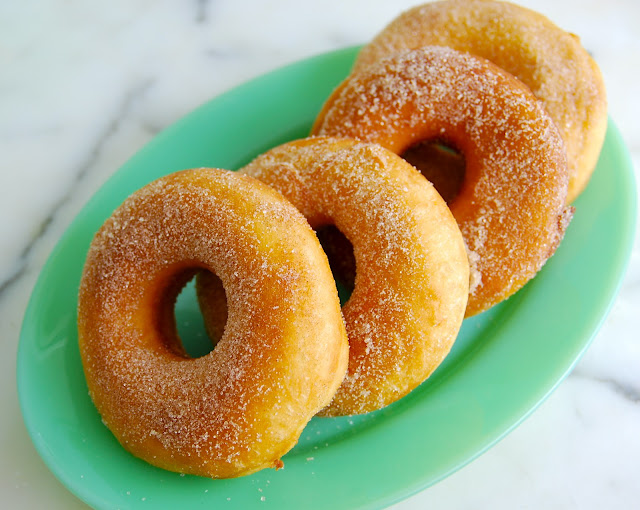 Mr. Recession Kitchen always wants chocolate to be involved in his treats, so I dipped the smaller doughnuts and the doughnut holes in a chocolate glaze when they were done.  I used Alton Brown’s chocolate glaze recipe, replacing the cow’s milk with rice milk. 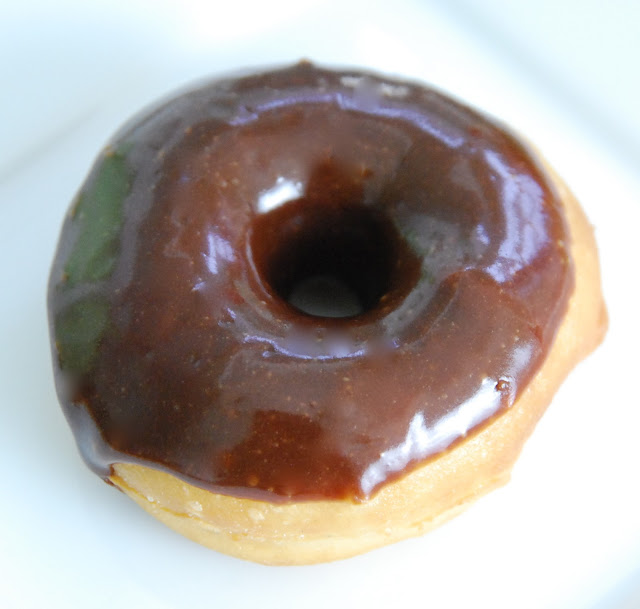 I cut the original recipe in half because doughnuts are really only good for a day or maybe two.  And lets face it, we didn’t need to eat 2 dozen of these no matter how good they were.  I replaced the egg with the clear “slime” from making flax eggs and straining off the seeds.  However, if I was going to make these again, I would leave this step out all together.  I think the yeast did all the work.
Yeast Doughnuts (Vegan)
Adapted from a recipe by Aton Brown
Makes about 12 - Use organic ingredients whenever possible
6 tablespoons warm water (95-105 degrees F)
3/4 cup rice milk
2 1/2 tablespoons palm oil shortening (Spectrum Brand)
1 package active dry yeast
2 tablespoons raw sugar + a pinch for feeding the yeast
3/4 teaspoon salt
2 1/3 cups unbleached all purpose flour
1 pint sunflower or canola oil
Place the milk in a small sauce pan over a medium heat until just warm.
Put the shortening in a small bowl and pour the warm milk over it, whisking until the shortening is dissolved and set it aside.
Put the warm water in a small bowl and add a pinch of sugar.
Sprinkle the yeast over the water water and let it dissolve for 5 minutes. (it should be bubbly)
Pour the yeast mixture into the bowl of a stand mixer and add the milk/shortening mixture.
Add the sugar, salt and half of the flour.
Using the paddle attachment, combine the ingredients on the lowest speed.
Turn the speed up to medium and beat until well combined.
Add the remaining flour, combining on low speed and then increase to medium again.
Change the paddle to the dough hook and beat on medium speed until the dough pulls away from the bowl and becomes smooth.  (a minute or two)
Transfer the dough to a well oiled bowl, cover it, and let it rise for 1 hour or until it’s doubled in size.
On a well floured surface, roll the dough out to 3/8 inch thick.
Cut out your doughnuts using whatever size cutter your want.
Set the cut out doughnuts and the holes on a cookie sheet and cover with a towel for 30 minutes.
Preheat your oil in a heavy pot to 365°
Gently place the doughnuts one or two at a time into the oil.
Cook for one minute.
Using chop sticks, flip the doughnuts over and cook for another minute.
Remove the doughnut using a slotted spoon and transfer to a cooling rack placed over paper towels.
Allow to cool for 15 minutes before dipping in cinnamon sugar or a glaze.

Posted by My Recession Kitchen at 4:08 PM