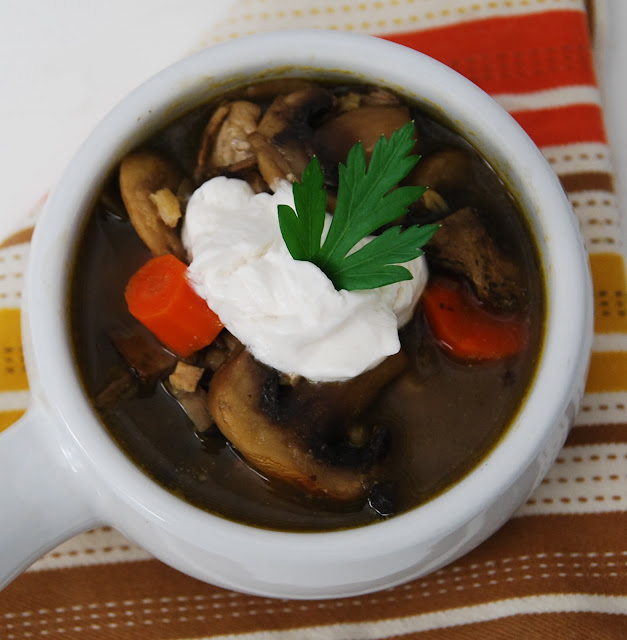 It rained here yesterday and when the sky cleared it was cold and damp outside.  Rainy, cold Sundays always make me think about making soup for dinner, so that’s what I did.  I made a big pot of mushroom barley soup.  I haven’t made barley soup for many years, though I’m not sure why.  I used to make it a lot.  So much so, that when my daughter (who was about three years old at the time) got a new baby doll as a gift, she named it Barley.
I was inspired to cook with this powerhouse grain again when my husband saw an article in the local paper that called barley “the new “superfood”.  New super food?  Dear Food Writer;  this cereal grain has been around for thousands of years, it’s an old super food that we have been ignoring.  The earliest evidence of wild barley can be dated to 8500 BC in an area ranging from North Africa to Tibet.
Barley is a super food because it’s a low glycemic grain that contains both soluble and insoluble fiber.  The soluble fiber helps the body metabolize fats, cholesterol and carbohydrates, and lowers blood cholesterol.  The insoluble fiber is wonderful for the digestive tract and reduces the risk of colon cancer.  This is a food my family should be eating a lot more of.  It also a good source of niacin, vitamin E and lignans. (that good stuff in flax seeds) The unfortunate thing about barley is that it also contains gluten.  So, if you are gluten intolerant, you should avoid this grain, unfortunately. 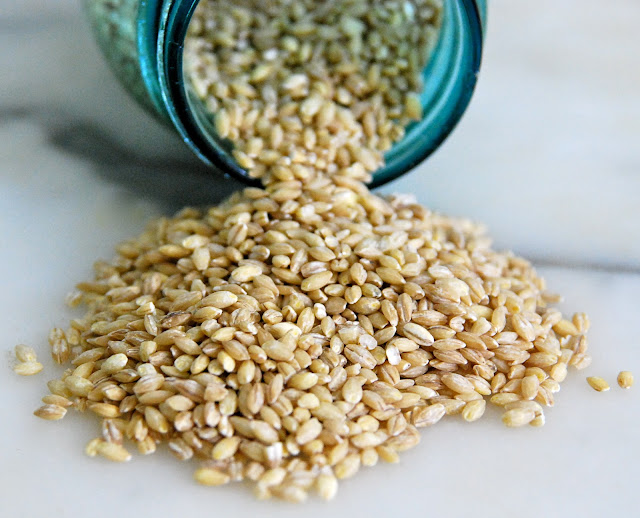 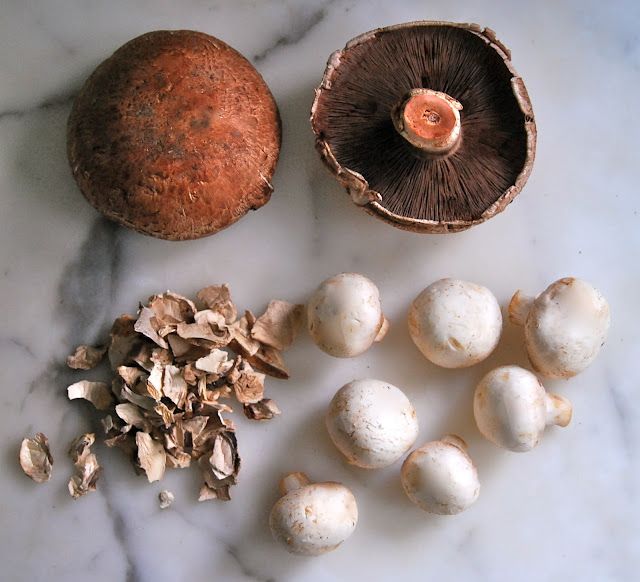 I used three kinds of mushrooms in this soup.  The common white mushroom, portobello mushrooms and some dried cremini mushrooms.  This gave the soup a rich, mushroom flavor that you wouldn’t get with just the white ones.
So, make some hearty mushroom barley soup.  Top it off with a big dollop of non dairy sour cream.  Your family and your insides will thank you.
Mushroom Barley Soup
Makes four servings - Use organic ingredients whenever possible
1/2 cup dried cremini mushrooms
4 cups vegetable stock, heated (I use Imagine Un-Chicken Broth)
2 tablespoons extra virgin olive oil
1 small onion, chopped
1 medium shallot, chopped
12 white mushrooms
2 (hand sized) portabella mushrooms
1/2 teaspoon salt
1 medium carrot, peeled and cut into rounds
2 cloves garlic, minced
1/3 cup hulled barley
1 bay leaf
Nondairy sour cream (optional garnish)
Put the dried mushrooms in a bowl and cover with 11/2 cups of the hot broth for 20 minutes.
Remove the mushrooms from the stock leaving the broth in the bowl.
Chop the mushrooms if they are whole.
Strain the remaining liquid through a strainer over another bowl to remove the grit and set aside.
Slice the white mushroom into four pieces and the portabellas into 1/2 inch pieces.
Heat the oil in a large pot over a medium heat.
Add the chopped onion and shallots and cook, stirring frequently, for 5 minutes.
Stir in the fresh mushrooms and the salt and cook until tender, about 8-10 minutes stirring occasionally.
Add the garlic and the carrot, stir and cook for 1 minute.
Add the remaining hot broth, the soaked mushrooms, the soaking broth, the barley and the bay leaf.
Bring the soup to a boil and turn the heat down to medium low and simmer for about 45 minutes or until the barley is tender.
Remove and throw away the bay leaf.
Top with sour cream.
Serve immediately.

Posted by My Recession Kitchen at 4:09 PM