The 2010 November Daring Barkers’ challenge was hosted by Simona of briciole.  She chose to challenge Daring Bakers’ to make pasta frolla for a crostata.  She used her own experience as a source, as well as information from Pellegrino Artusi’s Science in the Kitchen and the Art of Eating Well.
A crostata is an Italian tart that can be filled with fruit or pastry cream.  The base of the tart is a sweet short crust pastry, traditionally made from flour, sugar, butter and eggs.  My biggest challenge was to make the crust without the butter and eggs.
I started with 4 tablespoons of frozen Earth Balance organic buttery spread and two tablespoons of Spectrum’s non-hydrogenated palm shortening.  I find that this combination makes the flakiest crust.  The blandness of the palm shortening also helps to balance the saltiness of the Earth Balance. 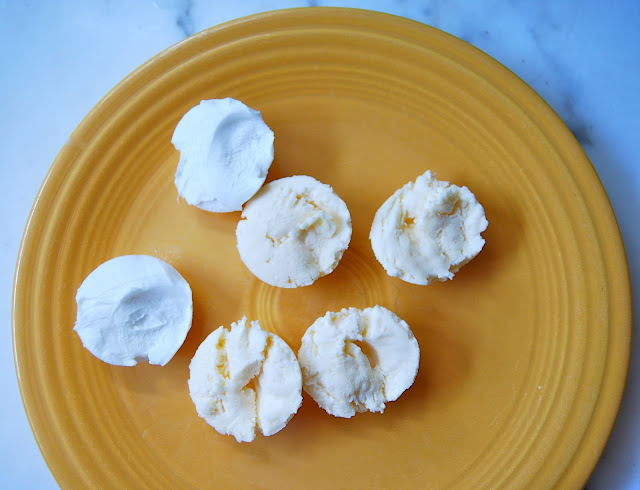 I combined unbleached white flour, white whole wheat flour and hazelnut meal/flour in a food processor with some sugar and then added the palm shortening and butter.  When that resembled coarse meal, I removed it to a bowl and added an egg substitute.  For the egg, I used 1 tablespoon of Bob’s Red Mill egg substitute, 2 tablespoons of water and 2 tablespoons of vodka.  I figured since the combination of water and vodka works well in a regular crust, it would probably work well here.  I poured that into the center of the dry ingredients and worked it in. 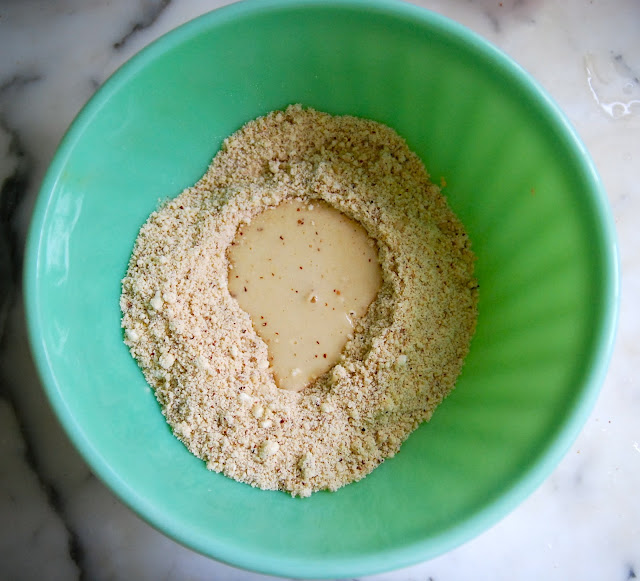 For the filling, I used apples and cranberries.  Both are easily available and inexpensive this time of year. 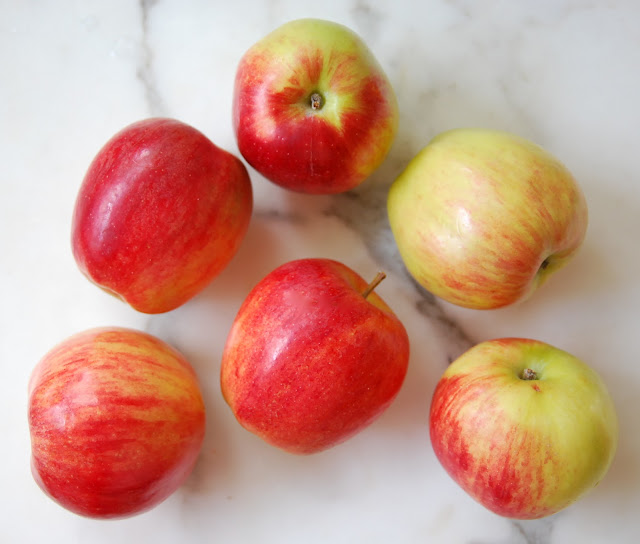 The Liberty apples are a sweet variety that helped to balance the tartness of the cranberries. 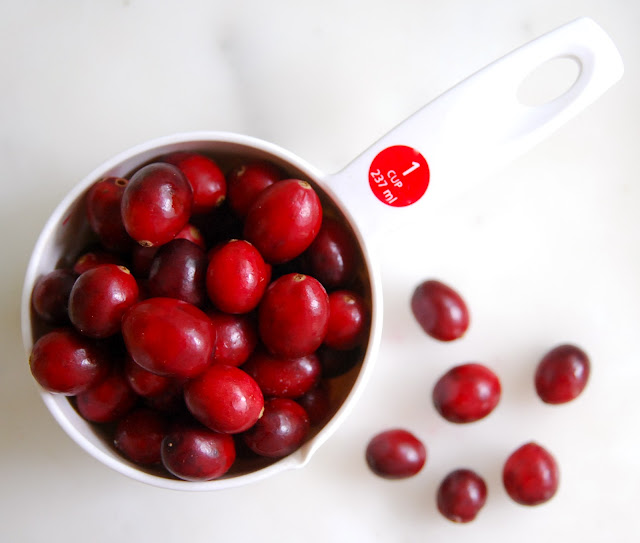 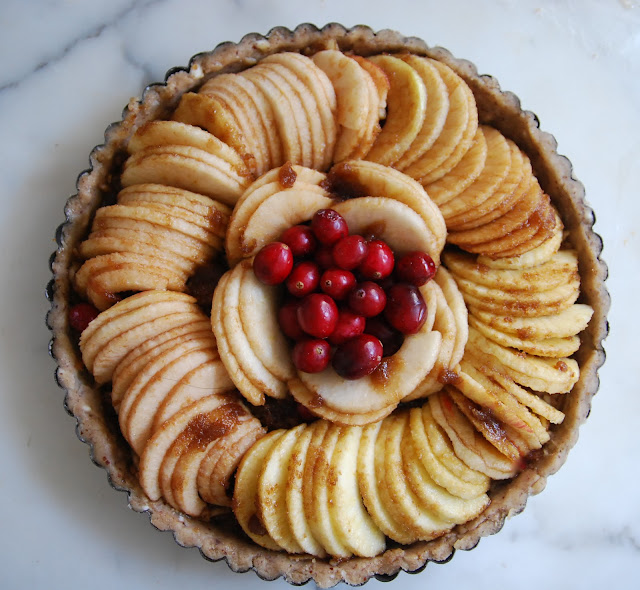 I really like the hazelnut meal in the crust.  It was a nice compliment to the apples.  You can substitute almond meal and it would be just as tasty.  I had intended to use almond meal but I didn’t have any on hand.  This crust could easily be made gluten free by using a gluten free flour blend in place of the white and wheat flours.  Pears, instead of apples, would also be a good substitution. 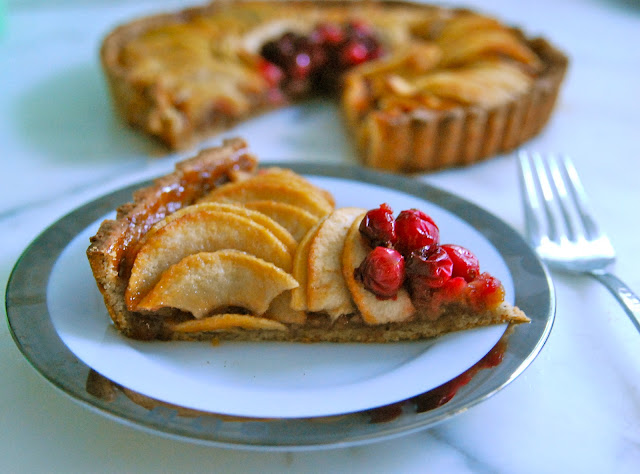 Apple Cranberry Crustata
Makes 6-8 servings- Use organic ingredients whenever possible
For the Crust:
1/2 cup unbleached all purpose white flour
1/2 cup white whole wheat flour
1/2 cup hazelnut or almond meal/flour
1/3 cup superfine sugar
4 tablespoons Earth Balance whipped buttery spread
2 tablespoons palm shortening
1 tablespoon Bob’s Red Mill egg substitute
2 tablespoons cold vodka
2 tablespoons ice cold water
Put the Earth Balance and shortening on a plate and put them in your freezer for 20 minutes.
Put the flours and sugar into a food processor and pulse to combine.
Add the chilled butter substitute and shortening, and process until it resembles coarse meal.
Empty the mixture into a bowl.
In another small bowl whisk together the vodka, water and egg substitute.
Make a well in the flour mixture and pour in the egg substitute mixture.
With a rubber spatula, using a folding motion, press down on the dough until it sticks together.
Form the dough into a disk and wrap it in plastic wrap.
Refrigerate for 2 hours.
For the Filling:
6 apples
3/4 cup whole fresh cranberries
4 teaspoons fresh lemon juice
1/2 cup light brown sugar
1 tablespoon barley malt syrup
2 tablespoons Earth Balance, melted
1 teaspoon vanilla extract
To make the crostata:
Preheat your oven to 375°
Roll out the dough and line a 9” tart pan.
In a bowl, mix together 1 tablespoon of the melted Earth Balance, 1/4 cup of the sugar, the barley malt syrup and the vanilla.
Peel and grate two of the apples and sprinkle 2 teaspoons of lemon juice over them.
Mix the grated apples in to the sugar mixture.
Spread the grated apple mixture in the bottom of the tart crust.
Sprinkle 1/2 cup of the cranberries evenly over the apple mixture.
Peel, core and thinly slice the remaining 4 apples.
Sprinkle the remaining 2 teaspoons of lemon juice over them.
Sprinkle the remaining 1/4 cup of sugar over them.
Arrange the sliced apples in the tart pan so that all of the slices are going in the same direction.
Fill the center of the tart with the remaining 1/4 cup of cranberries.
Brush the remaining tablespoon of melted Earth Balance on the apple slices.
Bake the tart for 30-40 minutes or until the apples and crust are browned.
Allow the crust to cool before removing the pan.

Posted by My Recession Kitchen at 5:41 PM