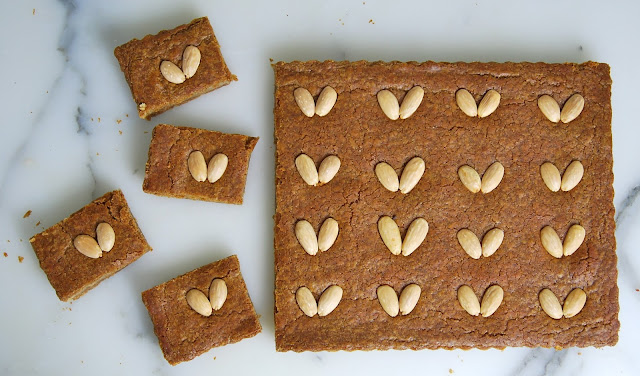 Francijn of Koken in de Brouwerij was our January 2013 Daring Bakers' Hostess and she challenged us to make the traditional Dutch pastry, Gevulde Speculaas from scratch!  That includes making our own spice mix, almond paste and dough! Delicious!

Speculaas is a type of dutch spiced shortbread cookie, traditionally served during the Christmas holidays.  I first heard of it when I received a sample jar of a creamy spread made from the cookies that you would swear was a cinnamon spiced peanut butter, but it actually contains no nuts. It's ridiculously delicious.  This pastry is made from two layers of speculaas dough with a layer of almond paste in between.

You start by combining the Speculaas spices.  It's a combination of cinnamon, cloves, mace and ginger, with the optional addition of coriander, nutmeg, cardamon, anise and white pepper.  Everyone's recipe is slightly different, you can use more of your favorites and leave out those you don't like.  There is one rule, you need to measure or weigh all of the difference spices and then add an equal amount of cinnamon. 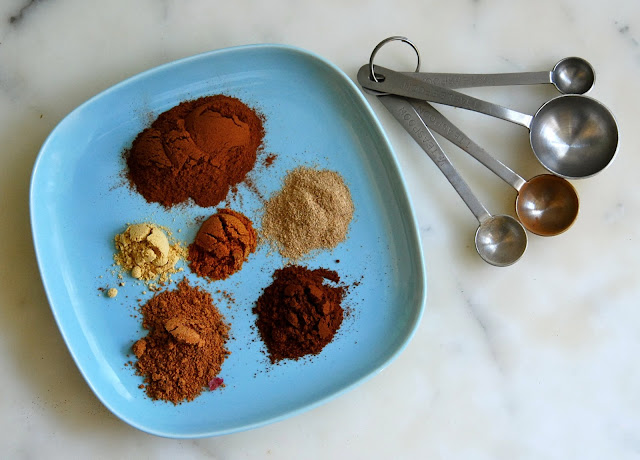 I used cinnamon, equal parts cloves and nutmeg, half the amount of ginger, mace, and coriander.  The Dutch word for this spice combination is Speculaaskruiden.  Combine all of the spices in a jar and shake. 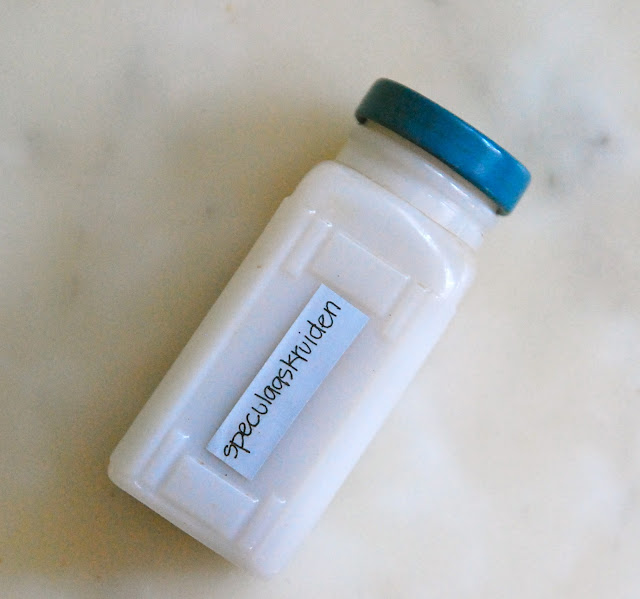 The second part of the recipe requires that you make almond paste.  I used almond meal, because I had it on hand, and it's a lot of work boil raw almonds to remove the skins.  I replaced the egg in the recipe with Bob's Red Mill egg substitute.  The almond paste can be made a day ahead, especially since there are no raw eggs in my recipe.

The third step is to make the dough.  This is a combination of flour, brown sugar, baking powder, spices, butter and a little rice milk.   I left out the salt since I used Earth Balance butter substitute and it's salty. 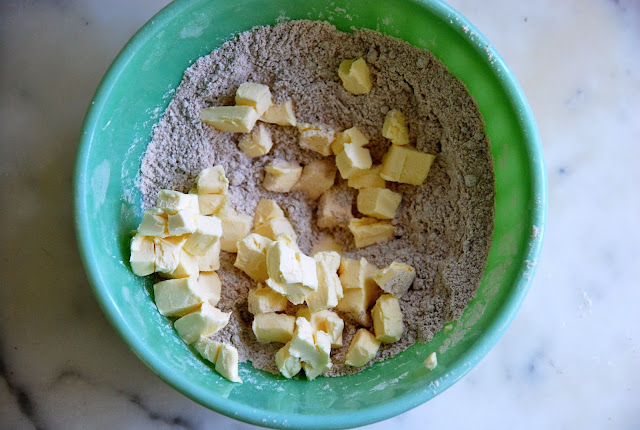 The dough needs to rest in refrigeration for 2 hours after it's made. 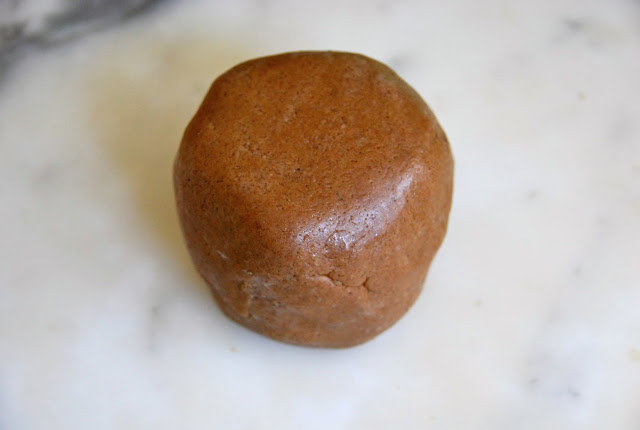 The next step is to cut the dough in half and roll out both pieces to the exact shape of an 8x10 inch pan. 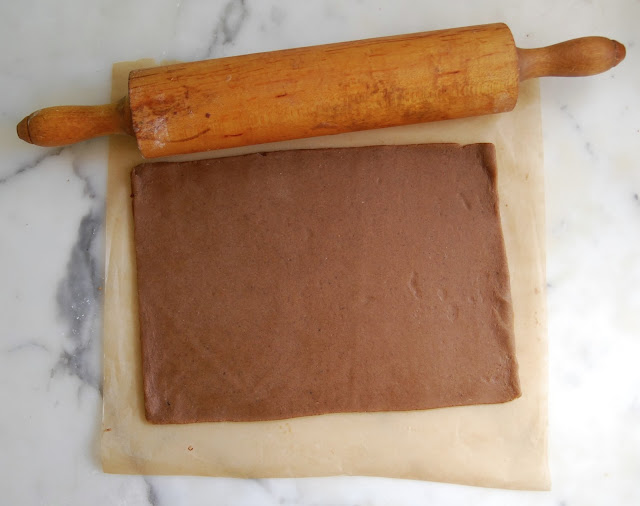 One piece is set in the pan and brushed with 1/3 of an egg.  Again, I used Bob's Red Mill egg substitute. 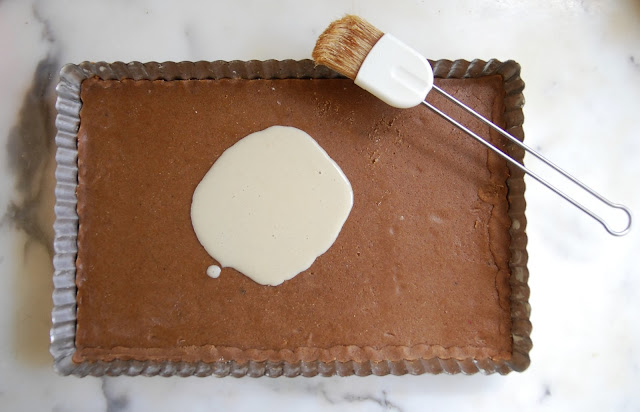 The the almond paste is rolled out between two pieces of plastic wrap to the same size and placed on top of the dough. 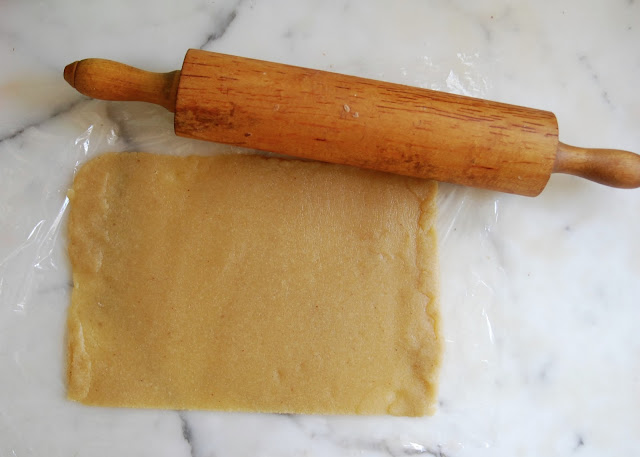 You brush 1/3 of the egg substitute on this layer as well. 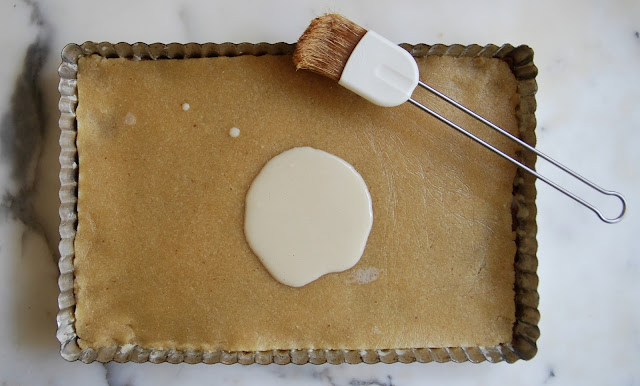 The second piece of dough is placed on top of the almond paste and brushed with the final third of egg substitute.  Blanched whole almonds are used to decorate the top before it's baked. 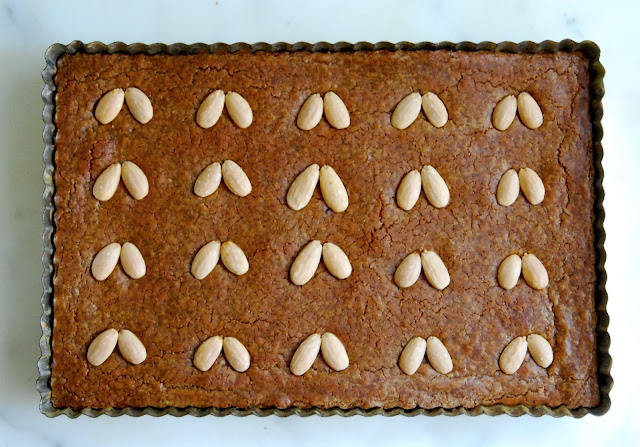 You can see the almond paste layer in the finished bars. 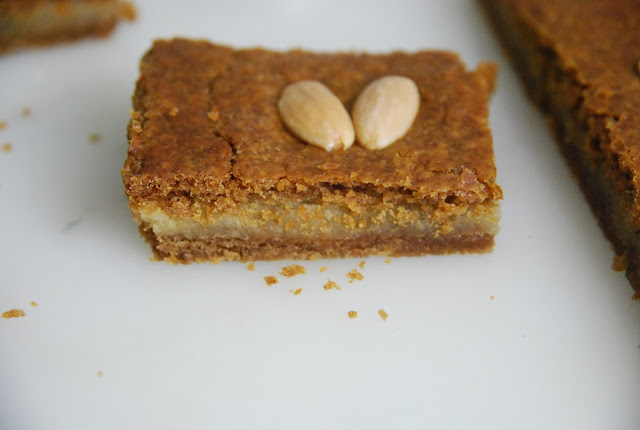 The smell is of the finished pastry is amazing but you'll want to let it cool completely before you remove it from the pan and cut it into squares.  It will be difficult, but resist the temptation. 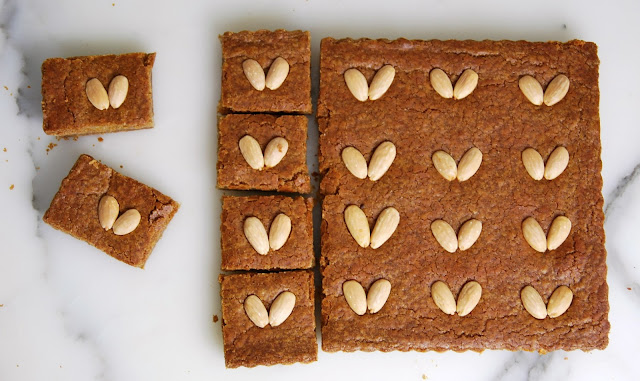 Put all of the spices into a jar and shake well.

Put the flour, baking powder, sugar and spices in a bowl.
Whisk to combine
Cut the Earth Balance into small pieces.
Add them to the flour mixture and knead until smooth.
If it doesn't come together completely, add the rice milk.
Form the dough into a ball and wrap in plastic wrap.
Refrigerate for two hours.

Posted by My Recession Kitchen at 10:02 PM