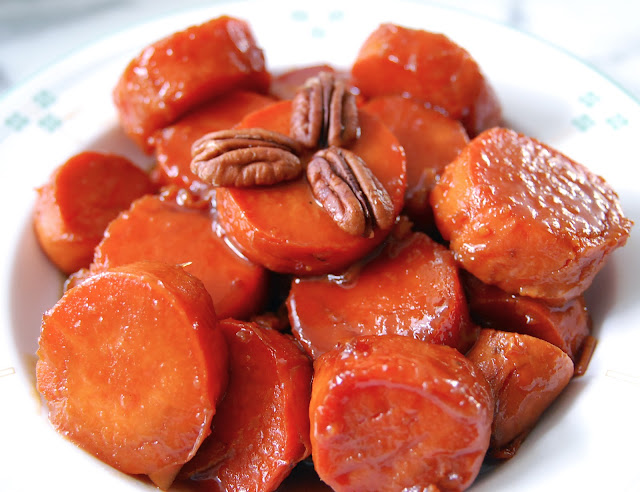 This one is for you TC.  Here’s the candied yam recipe.  The one dish at Thanksgiving that can never be tinkered with in any way.  I could change the stuffing a little each year, or serve brussels sprouts instead of green beans but THERE MUST NEVER BE ANY CHANGES to the candied yams. I did put a few pecans on the top....just for the photo....I apologize for letting nuts touch your yams.
I have to admit, these yams are delicious.  Definitely the best part of the Thanksgiving meal.  I think if I could only eat one food for the rest of my life, it would be yams.  Candied, they are perfection.
Actually, what we here in the U.S. call yams are really sweet potatoes.  Somebody somewhere decided that the dark orange sweet potato need to be differentiated from the light yellow sweet potato and called them yams.  I used what are called “garnet yams” in the stores, just so you know.
The sweet potato is ranked as one of the most nutritious vegetables, rich in complex carbohydrates, fiber, beta carotene (vitamin A), vitamin C and Vitamin B6.  It’s delicious and good for you.  I think that qualifies it for a place on your Thanksgiving table.  Covered with a sweet maple honey glaze..so even the kids will eat them.
This recipe is for 3 yams and fits in one 10” skillet or pot.  If you need to make more you’ll need another pan or make it in batches.  Start with a some garnet yams, they look like this. 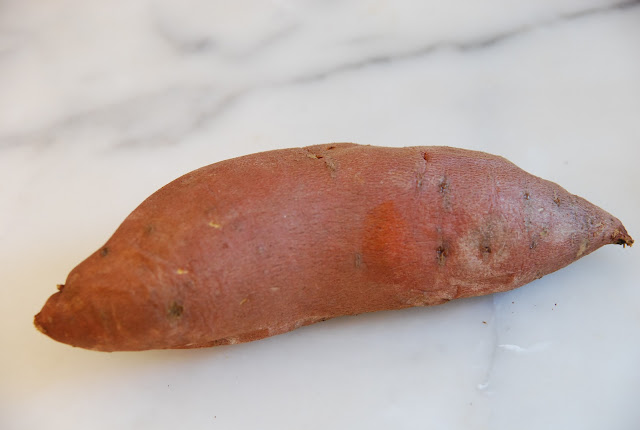 Bake them until they’re soft when you stick a fork in them but not completely done.  If you bake them until they’re done, they’ll fall apart when you candy them.  I just read an article that said you should bake them  at a very low temperature (below 200˚ ) to bring out their sugars. So, if you have lots of time, go for it, it will probably preserve their enzymes as well.  I baked them at 350˚.  The baking time depends on the size of the sweet potato/yam.  It works best to try and get ones that are about the same size so they will all be done at the same time.  Just keep an eye on them.  When they’re done let them cool until you can handle them.  Cut off the ends, peel them and then cut them into approximately 1” pieces. 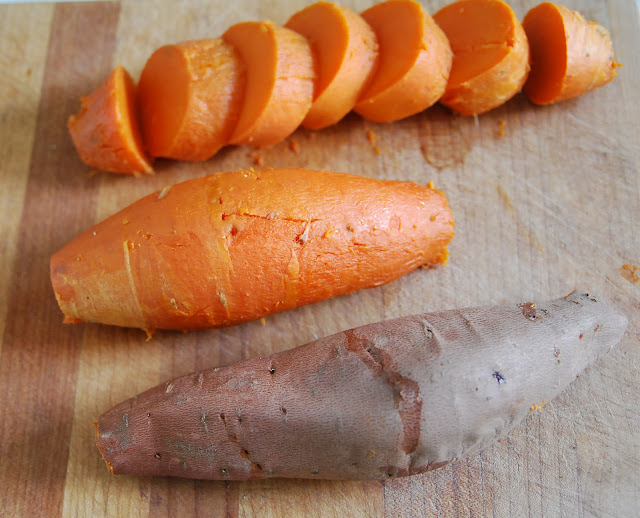 Melt the Earth Balance margarine into a 10” frying pan (cast iron works best) on a medium low heat.  Add the honey, maple syrup and barley malt syrup.  You may not have barley malt on hand, but don’t leave this out, go buy a jar.  It really adds to the flavor and texture of the glaze.   Mix everything together and then add the sweet potato/yams.  Wedge them all in there. 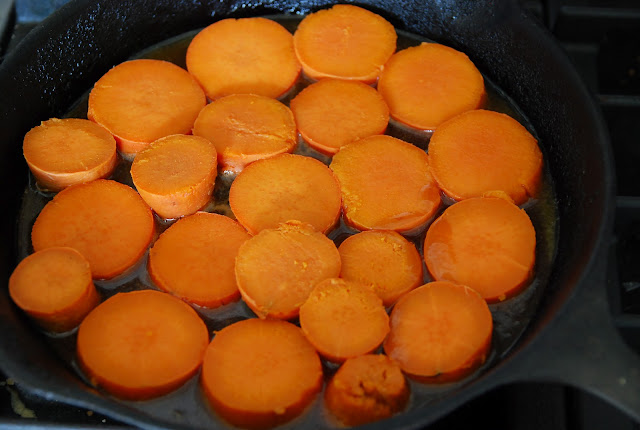 You can do it TC...you can make the yams....since I won’t be there to make them for you.
Candied Yams
Serves 4 as a side dish - Use organic ingredients whenever possible.
3 medium sized yams
3 tablespoons Earth Balance non-hydrogenated margarine
1/4 cup pure maple syrup
1/4 cup honey
1 heaping tablespoon barley malt syrup
Preheat the oven to 350˚
Bake the yams until they are not quite done.
Remove them from the oven and allow them to cool.
Cut off the ends, peel them and cut them into approximately 1” slices.
Heat a heavy 10” skillet or pot on medium low and melt the Earth Balance.
Add the honey, maple syrup, and barley malt syrup and stir.
Add the sliced yams to the pan, wedging them all in there.
Lift the pan (wearing pot holders) tilting it so that the sauce covers the yams.
Cook for 10 minutes, lifting and tilting occasionally.
Carefully, turn the yams over.
Cook for another 10 minutes, lifting and tilting your pan so the sauce covers the yams.

Posted by My Recession Kitchen at 7:08 PM