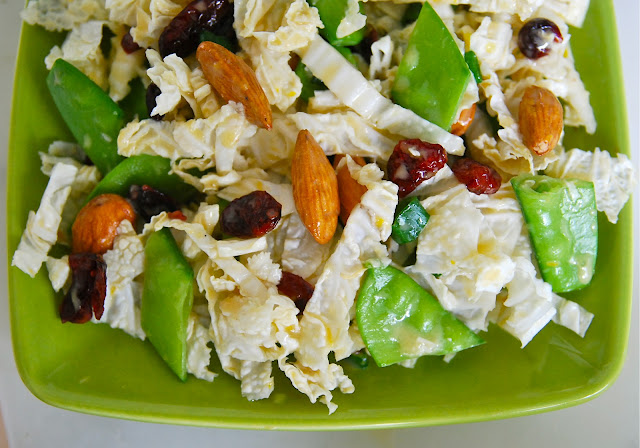 As I was typing the title for this post, it struck me what an odd name “cole slaw” is for a salad and I wondered what it’s origins were.  I turned to the web for a quick answer.  The term “cole slaw” comes from the partial translation of the Dutch term “koolsla”, a shortening of “koolsalade” which means cabbage salad.  Now it makes sense.  Apparently, the Romans were probably the first to make cole slaw, because it’s mentioned in Caelius Apicius’ collection of cook books (On the Subject of Cooking) from the 4th or 5th century.  His version contained vinegar, eggs and spices.
Mine is made from Napa Cabbage, peas, green onions, (both from my garden) almonds and cranberries. 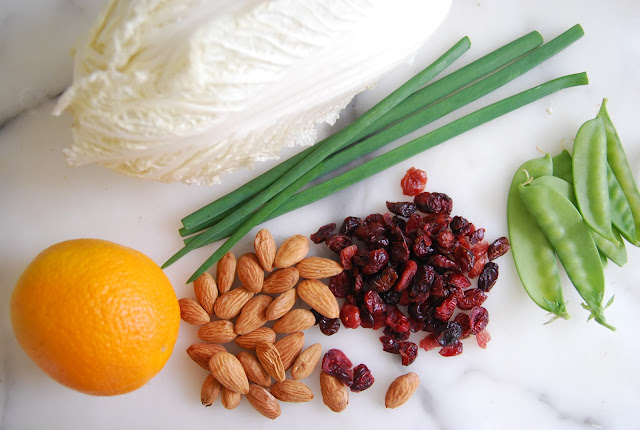 Simple ingredients which I change depending on the season and what I have on hand.  You could easily substitute pecans or walnuts for the almonds.  I used almonds that I soaked, sprouted and dehydrated to give them a nice crunch without destroying the enzymes.


I dressed this salad with an orange mustard dressing.  I used Sierra Nevada Pale Ale Honey Mustard which is my favorite mustard, but feel free to substitute it with your favorite.  I also used a little organic vegan mayonnaise to give the dressing a slightly creamy taste and texture.  I encourage you to use a mayonnaise that is made with expeller pressed oils.  Most commercial mayonnaise is made from chemically extracted oils.  The chemical most often used is Hexane.  Hexane should not be eaten. It’s a solvent used in gasoline and glues.  If you don’t use a vegan mayo, consider an organic one or at least one that says it’s made from expeller pressed oils.  You should also use an organic orange.  Any time you’re zesting citrus, use organic fruit, because you just don’t know what they’ve sprayed on the conventional ones.
This cole slaw is an excellent side salad or, if you’re like me, you’ll top it with some diced baked tofu and call it dinner.
Winter Slaw
Makes 4 side salads or 2 dinner salads - Use organic ingredients whenever possible.

Posted by My Recession Kitchen at 4:37 PM

Email ThisBlogThis!Share to TwitterShare to FacebookShare to Pinterest
Labels: Salads