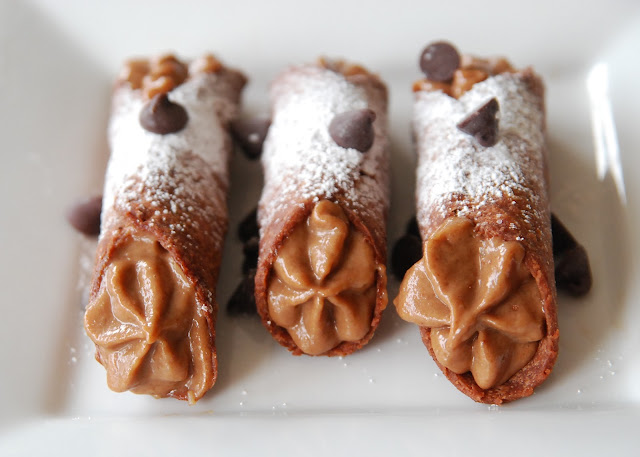 The November 2009 Daring Bakers Challenge was chosen and hosted by Lisa Michele of Parsley, Sage, Desserts and Line Drives.  She chose the Italian Pastry, Cannolo (Cannoli is plural), using the cookbooks Lidia’s Italian-American Kitchen by Lidia Matticchio Bastianich and The Sopranos Family Cookbook by Allen Rucker; recipes by Michelle Scicolone, as ingredient/direction guides.  She added her own modifications/changes, so the recipe is not 100% verbatim from either book.
I have to admit, I would never have tried to make these on my own, I’m just not big of fried desserts.  But I was intrigued when I read the challenge.  Because I’m allergic to eggs, I’d never eaten a cannoli.  I was surprised to discover that no eggs are actually used in the shells except to “glue” the tubes together at the point that they overlap.  That was easy to overcome, I just brushed them with a little soy creamer and used a fork to make sure they didn’t come apart.  I wanted to make chocolate shells so I replaced a few tablespoons of the flour with cocoa powder as directed. 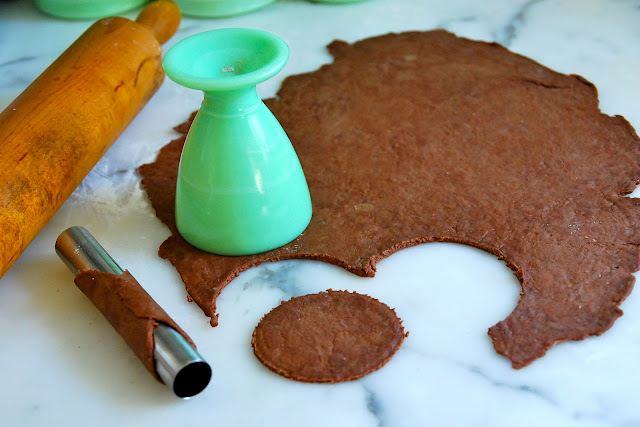 I had to order some some stainless steel cannoli forms on line since none of the kitchen stores in my area sold them.  I was hesitant to use a tinned steel form.

The filling, in the recipe Lisa Michele chose, didn’t contain eggs either.  It’s basically a sweetened and flavored ricotta cheese.  Because of health reasons, I decided to opt for a non dairy, cholesterol free filling of cashew creme flavored with coffee.  In hindsight, I should have used a pudding recipe instead, I felt that the cashew creme was a little heavy.  I froze the extra finished cannoli and ate them later, frozen.  I actually like them better that way, even though the shells lost some of their crunch.  It got me thinking about a cashew based ice cream....

If you want to try to make these for yourself, you can click on the link for Lisa Michele’s website above, for the recipe.

Posted by My Recession Kitchen at 7:46 PM