My Garden Has a New Squatter 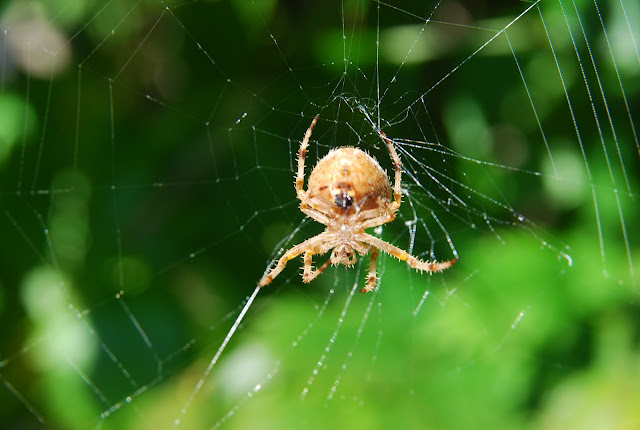 This guy showed up in my garden last week on this large well constructed web.  We noticed it because it caught a wasp, which was buzzing loudly.  The wasp was probably screaming in wasp speak, aware of it’s inevitable fate.  I have to admit I couldn’t watch what happened next, I just can’t watch this sort of thing.  I hardly ever watch the nature channel, for this very reason.  I just can’t watch animals eating each other.  I know, it’s the natural order of things, but I can’t do it.  This is why I don’t eat animals or birds myself.  I figure, if I don’t have the courage to kill it, then I shouldn’t eat it.

So, according to Mr. RK, the spider chopped the head of the wasp off first and then proceeded to chop up the remains of the wasp and move them into a little shed he made out of leaves.

Then we had some rain.  I looked for the spider web, but it was gone, but the leaf shed was still there and so was the spider. 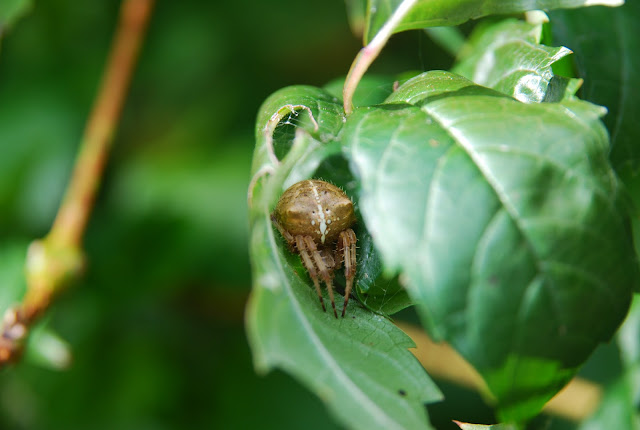 I'm not sure what he's doing in there...making a little sauteed wasp with onions??  I'm not even sure it's a male.  Look how fat this spider is...maybe it's a female and she's about to give birth to a couple million baby spiders??  Does this spider have a name?  I don't know what it is.  I've never seen a spider like this anywhere before.  Maybe you can tell me.

Posted by My Recession Kitchen at 5:34 PM